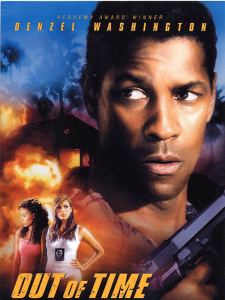 Another perfect example of average material being elevated by above average performances.Out of time is your average thriller which has been made what it is by a soulful performance from Denzel Washington, Sanna Lanthan and Eva Mendes . It is testimony enough of the fact that what a bunch of spirited actors can do to a insipid script.

The story is that of Chief Whitlock(Washington), who after a tumultuous marriage with Eva Mendes is having a roaring affair with Sanna Lanthan who is also married. Sanna is diagnosed with terminal cancer and Whitlock is ready to go to any extent to help her which includes giving away a 100 grands of narcotic held as evidence at his HQ. But suddenly his perfect plan goes all wrong as Sanna is murdered along with her husband and the money is also gone. Now all evidences points to Denzel alone as he is the one with the motive to kill her and he has both his department and the DEA hot on his heels for the money. To make the matter worse, he has his own wife, now a detective, working on the case with him.

The electric performance and the sheer persona of Denzel Washington makes this a great fair. It even inspired a few copies, “ZEHER” being a notable one from Bollywood. The great landscapes and the titillating sound track adds to the sparkle of the movie. To call it a passable thriller would be an understatement as its more than a joy ride that we can enjoy for multiple times. For the fans of Washington, like all other movies of his, this one though doesn’t rate at the top, but does have its own niche which the fans will enjoy and appreciate in the years to come.