The latest offering from Steven Spielberg has everything that you would crave from an epic and an epic it is in every sense of the term. But please take note one has to have the patience to let the movie warm up to you. War Horse starts of leisurely and the development is slow and the proceedings are slow. The story starts developing almost half and hour into the movie. For those who are able to keep up the patience, there are great rewards.

The story revolves around a horse, who is bought for thrice its price as a colt. He finds a

sympathetic master in Albert Narracott(Jeremy Irvine), who trains him and the two achieve an amazing feat after surmounting huge odds and its just starts looking bright for the duo when a twist of fortune lands the horse in the British Cavalry. While in the cavalry, he finds another caring master in Maj. Jamie Stewart(Benedict Cumberbatch). the two strike a chord instantly but as fate would have it the horse had to end up a vagabond until its found by Emily(Celine Buckens) and later ends up in German hands. Meanwhile Albert enlists in the British army to look for his horse not knowing, that his horse is on the other side of the fence. The rest of the story is about how the two meet and whether they would survive the war to be together again. 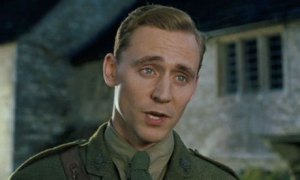 War Horse is a heart-warming story unlike anything we have seen in the recent times. It needs a sensitive heart to be enjoyed thoroughly. Many would mistake it to be a war movie which considering the graphic war sequences it is but at heart its more of a biography. The biography of a horse. The movie is also a reminder of the fact that love and relations are one of the most potent powers in the world and they can transform a simple man into hero as is the case with Albert in this movie. The development of the relation between the horse and Albert is beautifully filmed. It will really

make you feel the love between the two. the sequences never go over the top and have firm sense of believability to them which goes on further to enhance the strength of the narrative. The emotions are kept under grasp and even though there are several highly emotionally charged moments, they never get cheesy or corny.

War Horse being a Spielberg movie has a top notch technical angle to it. Special 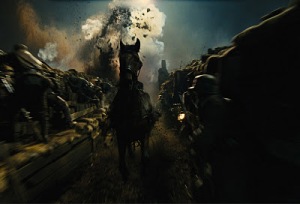 mention must be given here to the editing. The editing is crisp and imaginative. It has to be given repeated viewing to be enjoyed completely. There is a sequence where the British cavalry charges the German artillery in a face off. That is a master stroke. I will not give up the sequence here and would let you enjoy it with its share of surprises. The background score is another winner. The score weaves an enchanting yarn all throughout the movie and pops up in sudden moments which leaves you limp. “Beautiful” is the term I have to use for it.

Coming to the performances, The whole ensemble cast does extremely well. No one can be singled out here apart from the fact that Jeremy Irvine and Celine Buckens have the most effective roles and they do total justice to their charecters. The run time is just about perfect and as I said before, One has to let the movie warm up to them. It takes its own time to get in the mood and you have to go by it if you want to enjoy it completely. Final words….War Horse is a charmer in every sense of the term. It has everything working for it and the Oscar nominations feel truly and thoroughly deserving.