Released in the year 1994, Mohra proved to be one of the most popular and eventually a cult classic in its genre. The subject of revenge and good vs evil has been done and redone again and again in the Hindi film industry and interestingly it is also one of the most popular money spinner but what set Mohra apart from the others was its treatment.  The story revolves around an iconic newspaper mogul Zindal(Nasseruddin Shah) who employs the services Vishal(Suniel Shetty) to wipe out the Mumbai underworld without the technicalities of a straight forward legal procedure. Vishal is a man ravaged by the undoings of drugs and and its peddlers and after some initial hiccups agrees to help him in endevour.Then there is the sultry seductress Roma(Raveena Tandon) who singly handedly rescued Vishal from a prolonged jail stint and also brought him in Zindal’s notice. Roma is a fearless reporter who works for Zindal and is in love with Inspector Amar(Akshay Kumar). Amar is a uptight police officer who believes in going by the books and finds himself in crossroads with Vishal who has a one point agenda to wipe out the whole Mumbai underworld. As the plot thickens, Vishal realizes that what Zindal had told him might

not have been the complete truth.

Mohra has everything that the audience craves, high octane action sequences, potent drama and chart-bursting musical numbers. It could be sighted as a flag bearer of  commercial Hindi Cinema. There will be many who will mock at the routine song and dance numbers and sight reasons like “how can all the characters sing???” but hey buddy..!! this is how Hindi films are made. Song and dance sequences, grandiose costumes, hundreds of extra dancers and the hero and heroine performing in their midst is what we have grown up watching and loving and I strongly feel that we should loose our USP and continue to put music in our cinema but in a more subtle manner. Nevertheless, Subtle was not 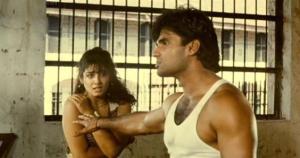 Rajiv Rai’s way who even made a character artist like Naseeruddin Shah do the tango. The drama is potent and some of the scenes, specially the ones which explain, Vishal’s past are well filmed. The climax also has its dose of dramatics which I might dare say works to its advantage. One scene that i particularly liked was the one in which Vishal comes back to his house, being released from jail and traces back his memories. Its a truly touching sequence with Pankaj Udas’ Na Kajre Ki dhar playing the background which really elevates the sequence.

The action sequences deliver. Akshay Kumar looks apt and electric in his martial arts charged Hindi style DHISHOOM DHISHOOM, while Suniel Shetty sticks to more basic hand to hand combats which does suit his well built body and makes the scenes much more believable. There are plenty of action sequences to make the action buffs happy. The songs are all beautifully filmed but “Tu Cheez Badi Hai Mast Mast” and “Na Kajre Ki Dhar” stand out.

Overall Mohra is one of those Hindi movies which if you haven’t watched, then you have missed a lot. Its extremely cliche and right over the top corny. But thats also its USP.