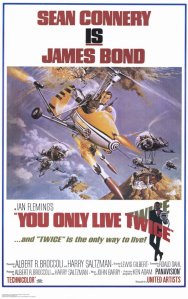 SPECTRE is at it again. This time the plot is to instigate the US and Russian into a full blown war by hijacking their respective satellites and coning the countries into believing that it was their counterpart who did it. However MI6 senses a rat in the business and sends in 007(Sean Connery) to Japan in order to track down an Industrialist who might be working for SPECTRE. Once in Japan, Bond meets Tiger Tanaka (Tetsurô Tanba) his Japanese counterpart and the number one man of Japanese secret service and also a whole lot of other cute Japanese girls who would pave the way for him to make an entry into the heart of SPECTRE’s base and meet his primary adversary and SPECTRE no. 1 Ernst Stavro Blomfeld (Donald Pleasance). On the way Bond has his customary meeting with equipments officer Q and gets his hands on Nelly, a miniature flying craft with enough boom to annihilate a whole squadron of aircrafts and also having the capabilities to spy on the enemy with great results. He also takes in a wife who proves to be quite beneficial to the mission. 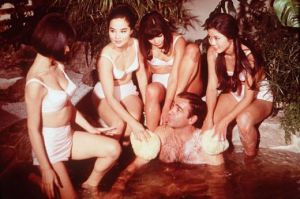 After the rather lengthy and yet entertaining Thunderball, You Only Live twice, lacked the punch and also the drama which made the earlier Bond Films such a success. Here one gets the clear feel of Connery aging and there are a few tints of grey which just doesn’t go well with the flamboyant and womanizing self of Bond. The aging bond also results in cutting down on the action sequences and special effects making way for actual physicality. The plot is weak. Apart from the final half hour when Bond comes face to face with Blomfield, the rest of the movie remains surprisingly mundane. The prolonged sequence in spas and massage salons with very little eye candy doesn’t help matters. 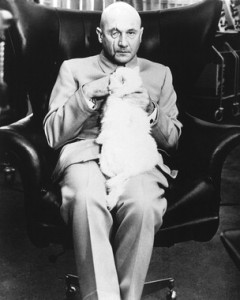 You Only Live Twice is probably one of the few Bond Films without a distinctive Bond Girl. However what it lacks in eye candy is made up for in the adversary. Donald Pleasance makes a wonderful SPECTRE no.1. His makeup is top notch and adds to his sadistic and vile presense. Tetsurô Tanba as Tiger Tanaka complements Connery well but has very little to do.

The cinematography is once again worth a mention. The high level of technical finesse continues to serve the Bond Franchise well. The Arial shots and the climactic battle sequence between Bond and Tiger’s Ninjas and SPECTRE’s forces is enthralling. The editing also leaves little to complain about.  The music is passable. 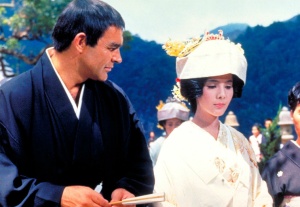 took over from him for one movie before, Connery made a comeback in Diamonds are For Ever. After sitting thorough this movie I can jolly well imagine why. Nevertheless complete with the basic ingredients of a Bond film, You Only Live Twice is entertaining enough to deserve a viewing. However in comparison to its predecessors, it falls flat on its face.  Watch it only if you are looking for some mindless entertainment and nothing more.