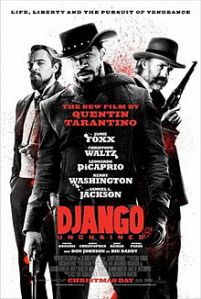 After a gap of three years, Tarantino is back with his new motion picture event and he is back with a bang. Over the years he has paid homage to the the motion picture forms of the earlier times and Django Unchained is another gem in the same line. Taking a sharp turn from his last film, Inglorious Basterds, QT takes us way back in time, two years before the Civil War broke out in America. Its is a very cold evening, somewhere in Texas. Django(Jamie Foxx) along with four other slaves are being towed in through the wilderness by their runners when Dr. King Schultz(Christoph Waltz) crosses his path and offers to buy him off. After an unexpected duel with Django’s runners, Schultz is able to free him and the duo go looking for the the notorious Brittle Brothers. Django seems to be the only person to have known the Brittle brothers by face and Schultz offers him his freedom in return for his help to find the trio.

Schultz, who is a Dentist turned bounty hunter, tracks down the Brittle brothers with Django’s help and guns them down but not before a whole lot of drama. Impressed with Django’s prowess and nature, he offers him to stay on as his assistant for the winter, in return he promises Django to help him track down his long lost Love Broomhilda(Kerry Washington). The search for Broomhilda leads the duo to Mississippi and to a ruthless plantation owner in Calvin Candie(Leonardo DiCaprio) and his hateful repulsive assistant Stephen(Samuel L. Jackson).

Django Unchained is an exquisite film. The screenplay moves all along at a leisurely pace with emotions running high. However the audience once hooked will not feel time pass as the proceedings is sure to have a vice like grip on their attention. Tarantino’s trade mark style of prolonged dialogs with meticulously thought out words is visible all through out the picture. With the principal character of Django, having the need to show a lot of restrain, the matter is made better with him able to depict a straight forward, ” I am pinned down when I don’t want to be”  look almost at all given pretexts. Django’s metamorphosis into a thinking and acting man is stretched all through the screenplay and forms the core of the narrative. He starts off as a “no thinker” and ends up manipulating a whole lot of while folks.

The Blacks are depicted as artifacts which require a bill of purchase to be authenticated. the movie starts off with a Bill Of Purchase for Django and ends with one too. The shocking but fictional depiction of the atrocities coupled with the awe of the privileged to see one of their artifacts rise in rebellion against them makes for a never seen before viewing experience. Django Unchained is the black man’s revenge story, a story that he never had. I tried to picture in my mind what different would QT attempt with a classic like Django and would it end up becoming just a remake. Well I have my answer now. He took the classic and yet done to the death plot and put in Tarantinian sensibility and realism in it. Not to forget the unbelievably engaging dialogs between the cast.

The biggest shock factor of the movie lies in the shock of the characters itself to see the meteoric rise of a slave. Take for instance the scene where Django is asked to choose some clothes for himself and he asks if he really had to choose clothes for himself. The question works both as a comic relief and one laden with great tragedy if you may choose to see. The discussion at Calvin Candie’s table about why Niggers don’t overrun their owners and Candie’s own reasoning for the

matter with Django listening with a grim face is sure to strike a few bells.

The action sequences like most Tarantino movies happen as a result of extreme emotional upheaval. There is quite a lot of it and it is filmed with sincerity and vigor. The first shootout will hit you by surprise if you haven’t seen the trailers yet. The shoot out at Candie’s dinner after the whole matter is peacefully settled shows the sudden emotional reckless of man. Look out for the apology from Schultz.

Coming to the performances, it is an uphill task to point out one stellar role. Jamie Foxx is outstanding as Django. He is the slave and the conquerer that you expect. His gradual change of tone and audacity, his ferocious looks, his tender love for

Broomhilda truly cannot be quantified in words. Christoph Waltz carries forward from where he had left off in Inglorious Basterds. If he was the lovably hateful Hans Landa in the Basterds,  here his a bounty Hunter with a heart of gold. they don’t get better than him. He is German nevertheless. Waltz can speak Tarantinian like no one else and his timing is impeccable. Its a pleasure just to listen to him speak. Leonardo DiCaprio as the evil Calvin Candie is both grotesque and

charming. he is the devil and we know that the devil is magnetic and so is our Mr. Candie. His one liners are going to be around for a while now. Watch out for the scenes between him and Waltz.  Samuel L Jackson, another Tarantino regular is immensely hate able. There was at least two such instances when I felt like smashing his face. That goes on to show the amount of success he has achieved in essaying his role.Kerry Washington is apt as Broomhilda. And Guess what??? Franco Nero makes an appearance too.

Robert Richardson effectively captures the essence of theme with his lens with Page Buckner, David F. Klassen (supervising art director), Mara LePere-Schloop and Suzan Wexler creating authentic and beautiful art designs. The music has been creating raves all across and it just goes on make the screenplay more lucid and at points feel seamless. The major cuts between acts are elevated by the music with both Schultz and Django having their own signature tunes, a style made famous by the movie Once Upon a Time In The West, where every principal character had a signature tune to go with.

Overall, Django is one of the best QT movies out there. Missing it would be blasphemy!!!