In his review of X-Men Origins: Wolverine, Roger Ebert wrote “Why should I care about this guy? He feels no pain and nothing can kill him, so therefore he’s essentially a story device for action sequences.” In the recent installment The Wolverine, director James Mangold seems to have worked his way across, Ebert’s complain by making Wolverine vulnerable but in doing so he has opened up perpetual flaws which weigh down not only the film nut more importantly the whole Wolverine charisma that the fans and viewers alike enjoyed the most. What made Wolverine so endearing was the fact that we knew he would triumph in the end. His wisecracks and on your face attitude seemed justified by his towering physicality and his inherent inability to die. Herein, Wolvie barely scampers through most of the film tottering for some much needed breathing space while a Jap chick keeps saving his ass. Now that’s not a pretty sight.

The film starts off in Japan where wolverine is held captive and the country is just on the brink of a nuclear strike. When Nagasaki is bombed, Wolverine survives as he should

and saves a Japanese soldier Yashida (Ken Yamamura). Many years later, Wolverine, who is now almost a caveman, is summoned by a dying Yashida (Haruhiko Yamanouchi) for a final chance at thanking him. After the unnecessary deliberation, Wolverine gives in and reaches Tokyo. Once in Tokyo he finds himself amidst both political and family turmoil as strangely enough he finds his healing abilities being reduced after an odd incident at Yashida’s place. Yashida dies soon enough leaving his granddaughter Mariko (Tao Okamoto), who is being targeted by the Yakuzo, in Logan’s protection. As the duo travel across the length and breadth of Tokyo, Logan is left to find a cure for his sudden deficiencies while also unmasking those behind the plot to assassinate Mariko. He is aided in his endeavors by Yukio (Rila Fukushima).

There has been a lot of talk going on around, many complex psychological layers, associated with the plot and some have even gone on to the extent of comparing it with the likes of Batman and Spiderman franchise. Well for all those I believe they must have seen some other film as I found the characters and the plot equally shallow. If adding the flash backs of a dead (murdered Gean Grey from X-Men : The Last Stand) girlfriend who was not actually your girlfriend accounts for physiological layering than yes, The Wolverine has multiple layers because she keeps popping up more than once accounting for the “multiple”.

The primary expectation from the film is that of a summer blockbuster which it claims to be but is not. Where is the action? 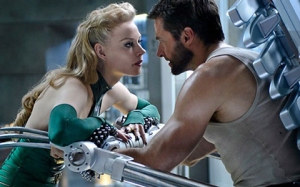 Where are the thrills? Where is the machismo? The way Logan totters through the whole film really breaks your heart and finally when he does come into his own, the proceedings get so exceedingly stupid that just wish for the end credits to roll. None of the Antagonists have a fair enough reason to be doing what they are doing and more importantly, they just sleep walk through their performances. The finale between the Wolverine and a giant samurai bot, straight out of Pacific Rim or even a la-Transformer just doesn’t give you the feel for it.

Hugh Jackman has practically made Wolverine his own and here too he busks in the glory of the character radiating immense confidence and charm but lackluster scrip pins him down every now and then leaving him to rue his wounds like a battered tiger. Rila Fukushima and Tao Okamoto do their bits. They are the only actors with substantial roles apart from the Wolverine. Svetlana Khodchenkova is wasted in a role that could have been done by anyone. The action is limited and unimaginative. The only bits of action that got me excited were when Logan takes on the Yakuzo atop a bullet train. The finale is a huge letdown. For once even the visual effects seemed flawed. Going by Hollywood standards, that a disaster. The action sequence at Yashida’s funeral has some of the tackiest wired jumps that I have seen in recent times. The jumps felt more like pulls with the gravitational forces totally neglected.The use of 3D is unimaginative to the extent that not even a single arrow is swooshed at the viewer.

Overall, The Wolverine is one of the biggest letdowns of this year so far. Complete with a flawed script, uninspiring story, limited action and a lack of machismo, this will go down as one of the weakest Wolverine outings. The previous Wolverine film was lambasted by critics and fans alike for its too many loop holes. What is left to be seen is what happens with this one.