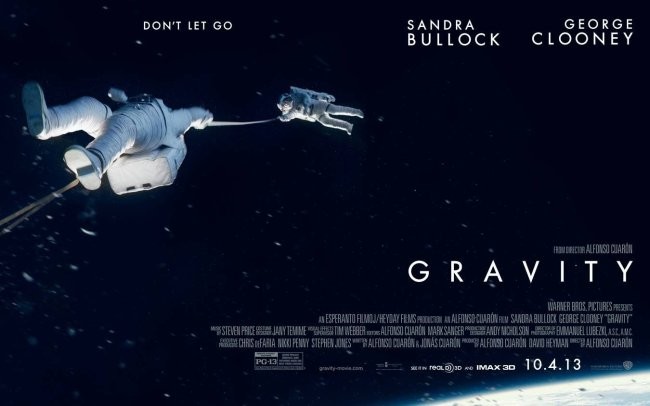 Gravity is a mesmerizing piece of film making from start to finish. After a long time, the motion picture form has been played with and in this case, it has come out with flying colors. I have seen many reviews comparing this film with 2001 A Space Odyssey with some even taking it to the extent of saying that Gravity is much better than 2001. I feel an overwhelming urge to first negate this very point and let my readers know that Gravity and 2001 A Space Odyssey have nothing in common apart from the fact that they both belong to the science fiction genre and a large chunk of them unfold in the space. While 2001 was very difficult film to put in a genre and as Spielberg very rightly said, 2001 A Space Odyssey was more about science eventuality than science fiction. However, Alfonso Cuarón keeps it simple enough, in case of Gravity letting one and all take a dip in the masterfully created visual marvel without the constraints of understandability and having just enough intellectuality and sense to take it a mile ahead of the other in the race.

Gravity is a harrowing episode in the lives of two individuals Matt Kowalski (George Clooney) and Ryan Stone (Sandra Bullock). Two individuals who are left adrift in space after 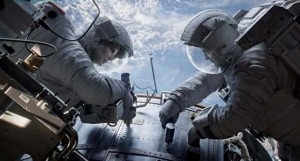 a storm of debris from a destroyed Russian satellite tears apart their vessel leaving them both gasping for oxygen and scampering for gravity. The film starts off with one of the longest of long shots that you will come across which lasts about 15 minutes. Chances are that you will miss it as you will be too busy marveling the spectacular frames presented to you one after the other. Matt declares right at the onset that he has a bad feeling about the mission and then they get all chirpy which is suddenly and very rudely interrupted upon by the debris shower which literally tears apart everything that the astronauts held so closely together. Once adrift, the two astronauts show both courage and sense to get back to each other and start to find a way to get back home. 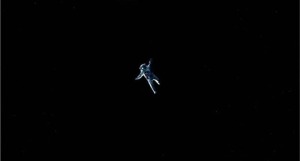 The space however proves to be an able foe as it continues to throw one surprise after the other at the duo and literally brings them down to the point of surrender. The film does well to negate one of the biggest humane issues which is the inability to surrender. The ability to fight for that matter may be lost but the inability to surrender sees us through for more than once. The character of Ryan who has suffered a huge loss in the form of her daughter who dies in an accident had every reason to let go of the fight and just sit back and let her destiny take her down but she finds the willingness to live amidst all the chaos and destruction. Matt lets her find her courage and towards the end her own thoughts begin to reflect through Matt’s words. Thus gravity in its own way elevates itself through these enriching sequences from being just another pretty sci-fi to a potent human drama.

The visual effects are a class act. The fact that almost 98% of the film unfolds in space with a large chunk outside man made vessels with actual physics to take care of should 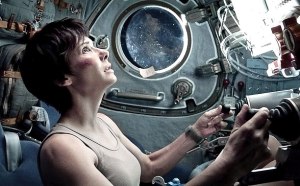 make you realize what a herculean task the VFX team had on their platter and I am thrilled to say this that they have pulled it off with a surgeon like precision. There isn’t a single shot which looks out of place or makes you stand up and take notice of a flaw. Even if there are scientific liberties taken, they are done with such perfection and aplomb that chances are the viewers will not notice a thing. The 3D is used in manner which puts it in league with films like Hugo, The Great Gatsby and Life Of Pi in the manner of its precision and imaginativeness. The 3D never gets distracting and just gives you the sense of the dimension all three of it. There are some first person perspective shots which I believe are one of the best ever done. They will thrill you and drive you to the edge of your seats in ways that you had never experienced before. The debris shower is done in such a breathtaking way that it alone merits the price of admission. The good news is there are two of them. The climax will easily go down as one of the most beautifully shot and imagined culminations in a long long time. 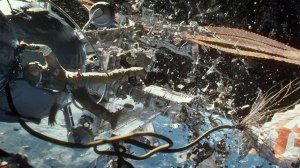 Coming to the performances, there are just two to talk about and that’s not less. Words cannot describe the performance that Sandra Bullock has turned in. This could easily be the best bit of acting that she has ever done. The audience gets to live her fears, anxiety, frustration, surrender and finally resurrection. It is through her that Gravity comes alive. George Clooney is a class act and even though he has a brief role he makes quite an impact. His arrival at the climax which triggers off a series of actions which result in Ryan’s resurrection is easily one of the high points of the film. Ed Harris as the voice of Houston is a character in himself.

In one word, Gravity is easily the motion picture event of this year so far. It is epic in every sense of the term. A film which should be watched and re-watched in theaters only. This is not the kind of film which you can glance through on your laptops, PCs or even home theaters for that matter. Gravity is meant to be enjoyed on the big screen in 3D. The IMAX release would be a better prospect. So do yourselves a favor and watch it as soon as possible. Chances are you will be watching it many times over.