Anjan Dutta chose one of the meatiest stories of Sharadindu Bandyopadhyay for his first Byomkesh Film. “Adim Ripu” was a two episode affair even in the Television series of Byomkesh which was aired on Doordarshan in the 1990s and was directed by Basu Chatterji with Rajit Kapoor as the titular character. There were stills of the film which were leaked when it was in production which suggested that Dutta may be shooting in Black and white to recreate the time and mood of the bygone era but with the release of the film, it became clear that it was actually in color. Abir Chatterjee was in the role of Byomkesh while Saswata Chatterjee reprised the role of Ajit who is also the narrator of the whole saga.

Bengal is reeling under a communal turmoil and the city is burning. Byomkesh (Abir) and Ajit (Saswata) are amusing themselves with petty tricks of their own in the absence of Saytaboti, Byomkesh’s wife 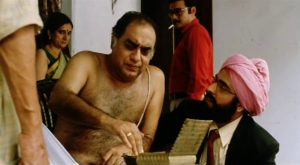 whom he has sent away to keep her and his son Khoka safe from the riots and other volatile situations. It is during this critical time that Miss Nanibala Roy (Swagata Mukherjee) walks into their home. She informs Byomkesh that the life of her son Prabhat (Rudranil Ghosh) might be in danger as he is the sole heir to a property which he received from his adopted father. Now his cousins who are also after the same property are threatening to kill him off for the same. 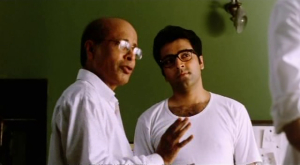 With no work in hand, Byomkesh decides to check out the case and pays a visit to the aggressors of Nanibala Roy and her son as well as the adopting father Anadi Haldar (Biswajit Chakraborty). Soon enough a murder happens but it is not Prabhat who is murdered but his adopting father Anadi Haldar who takes in the bullet. The family frames one of Anadi Haldar’s friend for the murder while the cousins arrive to take control of the property. Byomkesh is summoned again but this time by Anadi Haldar’s friend Keshto Babu who is accused by the family to have murdered Anadi Haldar. What happens next? Who has murdered Anadi Haldar and for what? These are the questions which drive the narrative of the film.

This is one of those rare thrillers which you can see again and again. For me once the story of a thriller is unraveled, very little remains to be re-seen but here we have a film which is 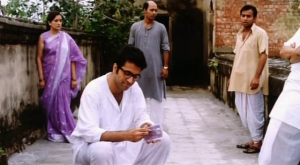 constantly enjoyable for its wonderful screenplay, superb performances and beautiful mounting and setting.It can be enjoyed on varying levels. The film may be looked upon as a family drama, a period piece and sparingly as a passion’s play. Abir is supremely in command of the character and unlike what many felt, I didn’t for a moment feel that his performance was getting overpowered by that of Saswata’s. The two brilliantly complemented each other. It was one of the prime strengths of the narrative. Their discussions and the way they throw around views at each other is wonderful to look at. The rest of the cast do justice to their respected parts as well. Rudranil and Swastika stand out. 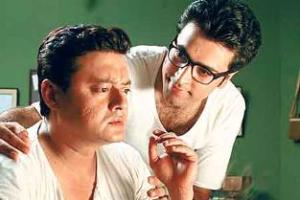 The film boasts of eye catching cinematography. The frames are beautifully rendered keeping in mind the time frame and more importantly the subject matter. The editing is sharp and the background music apt. In short this is one film which I really found difficult to find any flaws in. It’s near perfect keeping in mind the source material. This is the first of a trilogy of films. The next in the line is Abar Byomkesh which is equally enjoyable and the third will be the adaptation of the story “Kahen Kabi Kalidas” by Sharadindu Bandyopadhyay.