Mad Max: Fury Road comes 30 years after the last installment of Mad Max and George Miller seems to have spent these years ironing out the flaws in his previous installments because this film turns out to be a modern day masterpiece. For a film which has all but a brief travelogue for a story it packs so much punch that chances are you will find yourself heading back to the cinema after watching it the first time almost immediately. Atleast that was the case for me. The ravishing action sequences are the best that I have seen in a long long time but what makes them more effective is the fact that they are refreshingly different and executed with sensational gusto. The story demands and the visuals oblige.

In a stark desert landscape where humanity is broken, Max (Tom Hardy) is tormented by visions of his dead daughter and

wife. He is captured within moments of the beginning of the film by a fierce tribe led by the vicious Immortan Joe (Hugh Keays-Byrne). Joe is a dying lunatic who maintains a crop of women whom he uses only for the purpose of breeding his offspring. Joe controls the population by controlling the water and resources with the help of his War Boys (a group of loyal fighters). Imperator Furiosa (Charlize Theron) is an elite fighter in Joe’s clan who is entrusted with the task of bringing in fuel using her rig. Furiosa who was kidnapped as a kid with her mother and has been looking to turn the table on Joe ever since sees the next opportunity to bring fuel as her chance at returning to the place she was kidnapped from. 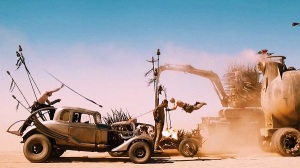 Max who is a universal donor is now used as a blood bag for one of Joe’s War Boys, Nux (Nicholas Hoult). As Furiosa escapes with Joe’s wives who are also looking for retribution, Joe launches an all out assault on her. Nux joins the army with Max strapped to the hood of his car, to continue supplying blood to him. As the two companies lock horns in a battle of life and death the picturesque locales of a rugged world provides the background for some sensational action sequences which is bound to have you glued to the screen. By the time the film ends, the viewer is bound to feel dizzy and dazed by the sheer amount of action that he/she has witnessed.

The film doesn’t have much of a story to tell, but whatever little there is makes complete sense. The story could be looked at as one which chronicles

the attempt at change of fate for Furiosa and Max who are from two different spheres of the same world and yet contribute to each other’s purpose of having a crack at freedom. Joe on the other hand is not only trying to get back his wives one of whom is heavily pregnant with his son but also looking to set an example for all those who look to defy him.

Each of the action sequences in the film is different from the other. The first fight is a cat and mouse chase, the next is where Max tries to escape and hangs in a balance, the next is a full out chase sequence involving some crazy stunts ending with the whole crew being consumed by a huge sand storm. The fight in the middle of a swamp at night, shot in bluish hues is beautifully envisoned. There is a strange melancholic feel to it. The following day, the action shifts back to the reddish hues of the sun bathed terrains with some more explosive stunts unfolding at a breakneck speed. In midst of all the madness, you see a guitarist playing away at his glory strapped to a gigantic speaker system. His music is like a beacon to the murder and mayhem that his compatriots bring in.

The world that George Miller envisions is real and scary. The gangs all have their own identity and their own way of hunting. They also have a purpose

to the mayhem that they bring and the most primary of them all is survival. That’s also what makes the fights so very scary and edge of the seat affairs. Mad Max: Fury Road is a departure from the previous Mad Max films for the reason that this is film leaves a good taste in the mouth. Atleast the first two installments of the series were very grim which left you heavy at the heart after it was done. I still vividly remember the scene from the first installment when Max finds his wife and daughter murdered. That was a heart breaking sequence which would haunt you. That is something you don’t have in this installment and for me it’s a welcome change.

The film rides heavily on Charlize Theron and Tom Hardy. Hardy has minimal lines but emotes through his eyes which is one of his hall marks. Theron is terrific as Furiosa and essays a role which could have become unbelievable so easily. She and Hardy bring the necessary credibility to the roles by their sensational performances. Nicholas Hoult also turns in a great act. His character starts of negative but through the course of the events transforms into a true hero. His looks and his actions will leave you dazed primarily because we do not expect a guy who looks like him to act in a manner that he does. Rosie Huntington-Whiteley as the ravishing Splendid Angharad is eye candy. She captures your senses in the scenes which she is a part of.

Overall, Mad Max: Fury Road is one of the best action flicks to have come out in years. This is an instant classic and will rank right at the top with the rest of the action greats. I simply feel amazed by the range that Miller has in his work. It’s almost impossible to imagine him to be the director of a film like Happy Feet, a film reminiscent of softness and fluff. Mad Max: Fury Road is sensational in every sense of the term and should not be missed at any cost. Watch it and be amazed by its sheer power.