Live and let Die was the first Bond film starring Roger Moore as the titular character that Sean Connery made his own for six films and George Lezenby chipped in with one film. While took his own approach to the character and the film as a whole, he did a commendable job as a character which was molded by Connery on his own mannerism but for once Moore was able to add his bit to the role and thereby created a fractured fan following for the series with a big chunk of the fans preferring him over Connery. However the film “Live and Let Die” did leave a lot to be desired especially for me as I found the film extremely shallow and at many junctures plain boring.

Three agents are killed on American soil under three different circumstances but following the same adversary, a man named Kananga (Yaphet Kotto) who is suspected of smuggling heroin in

America. The situation calls for James Bond to look into the matter. He comes over to New Orleans and with the help of his old American associate Felix tries to nail Kananga. But Kananga always remains a step ahead of him thanks to a gifted Tarot card reader going by the name Solitaire (Jane Seymour). Bond learns of a place hidden from the world where Kananga might be growing his dope. He makes way to this place only to be intercepted but thankfully lands a catch in Solitaire whom he must now seduce to get his job done. Kananga is not alone and has an ally in Mr. Big who is willing to go the distance to aid his partner. What happens next forms the crux of the narrative.

While Moore takes a lighter approach to the character than any of the previous Bonds and appears much less stressed even in the face of certain death, he does ooze charm particularly in the scene where he is with his female counter parts. The film is fast paced but the problem starts in the second half when you have an almost half an hour long chase sequence through water bodies which though beautifully filmed and choreographed will start getting on your nerves. The action is relentless and even though the first few films gave ample time for character development and plot points to develop, this time Hamilton seemed to be just interested in hoping from one set piece to another which ultimately led to the screenplay feeling under-cooked and tacky.

The baddies have always been the high point of Bond films with the first few films concentrating on the evil specter and its number one Blofeld. But here we are introduced to a new breed of threat in Kananga which seems to have appealed to a lot of people. However, to me the character lacked the panache and sheer presence of Blofeld and even though he shows ceaseless histrionics, he is never able to make the desired impact. With the antagonist not being able to make and impact, the film quickly mellows down. Geoffrey Holder‘s Baron Samedi tries to chip in with an interesting act but is unable to make up for the gaping holes.The director takes points from previous Bond films and introduces the character of Tee Hee(Julius Harris) who has a hook for one hand and is the chief henchman of Kananga. But even that trick fails as we get the feeling of déjà vu in his act. The fact of the matter also remains that he is hardly scary.

There are two bond girls and both of them are unimpressive. Jane Seymour has what can be called a part and she bears the same expression all throughout the film making you ask the question 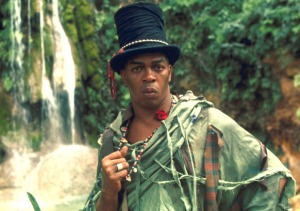 that whether she is happy to be rescued or would have been happier by the side of the baddie. She is also unable to make the necessary impact that the previous bond girls made even in their shortish roles. The film does have the style factor contributing heavily to it. This is a 70s film and it gives you a feeling of that in every sequence that you are a part of. Be it the costumes or the set design or for that matter the music, the film constantly keeps reminding us of the best that the 70s had.

Roger Moore’s first appearance as Bond fizzles out as more of a misadventure then adventure. In spite of his best efforts, he is unable to save this sinking ship as it takes a nose dive, further brought down by the weight of its rather eventful lineage. The film also suffers because of heightened expectations and even though it shows a few flashes of brilliance here and there, it is unable to sustain that magic and surrenders half way though. This is one of the weaker Bond films but will still suffice as a onetime watch primarily because of Moore’s spirited act , 70s setting and some of the innovative actions.