I have to admit this. I was very very skeptical about Ant-Man. Be it the name, the concept or for that matter the fact that the character was practically unknown to me. I thought that this film would be a huge dud. But boy! o boy! I was wrong. This is exactly the kind of film that Marvel is known for. Its quirky, it’s funny, it has dazzling visual effects and above all it has an interesting story to tell which is wonderfully executed. This film was marketed as one coming from the makers of The Guardians Of The Galaxy. After watching this, I feel that it didn’t need the veil of the film to generate good business or for that matter interest. It’s a terrific standalone film which is bound to make you stand up and take notice.

The story revolves around a con, Scott Lang (Paul Rudd) who has just come out of prison. He wants to reunite with his daughter but doesn’t have the

money to pay off child services. Frustrated and without a job, he gives into a plan from his friends to rob and old man. After he successfully breaks into the house, he finds nothing but a jacket and helmet inside the safe. He soon discovers that the jacket can transform him into as small a creature as an ant. Soon he is contacted by Dr. Hank Pym (Michael Douglas), the man who made the jacket in the first place and had allowed him to break into his house and steal it in the first place. The man offers him a job and a chance at retribution which Lang willfully takes. The rest of the film is about the job that he undertakes.

The film moves at a brisk pace leaving no room to think and find flaws in logic or the narrative. After the initial introductions and set up, the focus quickly shifts to Lang, his discovery and the job he has in his hand. A while is spent in his training which is engrossing and never gets boring. What aids the screenplay is the wonderful chemistry that Rudd and Douglas share. Evangeline Lilly who plays the daughter of Hank is the catalyst who frequently creates friction in the arguments. Together the trio creates an interesting exchange which takes the story forward in a whirlwind manner. And then begins the action.

me when you watch this film, you are bound to believe what is unfolding on screen. To start with the visual effects are tremendous. The action, however improbable seems believable in the film. Just imagine the fact that the climatic finale unfolds on board a toy train possessed by a little girl in her bedroom. That’s the setting for the good vs. evil fight which would go on to shape the future of humanity. Sounds terrible right? But when you watch it in this film, it just feels so real and then the magic of the visual effects and the superb background score sets in. There is a very strong physicality to the action which really makes you feel every punch and every blast. That’s something which works well for the film. 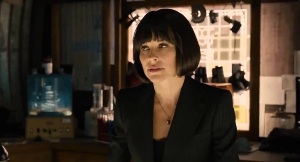 The cinematography and editing is top notch. The camera is always in the best place to capture the action and makes you sit in the best place possible to see this picture unfold. Russell Carpenter helms the camera here and its hardly any surprise that the film is a picture of beauty. The screenplay is written by Edgar Wright, the man who brought us the Cornetto Trilogy. I have immense respect for this man and he doesn’t let me down. The screenplay has trademark Wright stuff all the way through. The fast conversation, the fast cuts, the quick zooms and above all the ballistic action.

Paul Rudd has done a wonderful job with the character. He becomes Ant-Man and every once in awhile

you feel that he was enjoying the role. That comfort is depicted in his comic timing which is refreshingly real. Douglas has a charisma about himself and he continues to enthrall audiences in varied roles which surprisingly seem the same and yet we enjoy his act nevertheless. I could feel a “Gordon Gecko” touch to his Hank Pym in many sequences. However I enjoyed his act totally. Evangeline Lily is beautiful face. Inspite of the fact that the makeup team has done horrors with her hair, which is an extreme deterrent, she holds her own. Corey Stoll as the principal baddy is passable.

Overall, Ant-Man is an entertaining watch. It is by far one of the better and more entertaining superhero films of this year. The brilliant special effects, clever writing, wonderful performances and a promise to return again soon, makes this film one of the most entertaining films of the year. Watch it if you haven’t already.