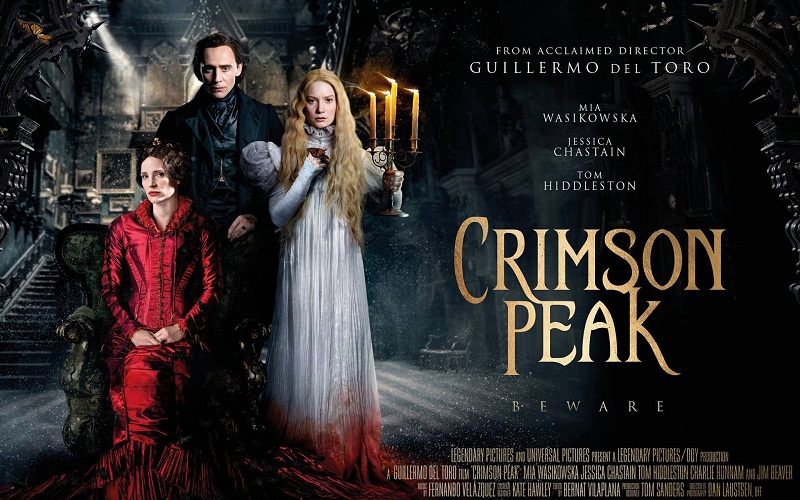 Crimson Peak is an extremely beautiful film to look at and has some really good performances from the three leads but it lacks the material and thrills to make you watch it again. I just loved Pacific Rim, Guillermo Del Toro’s previous work and even though it was at best popcorn pleasure, it had the heart and physicality to hold on to your attention and make you come back but Crimson Peak is an exquisitely crafted piece of work which is stunning to look at but at many junctures feels shallow and rushed. Another problem with the film is the fact it you can practically sniff the plot from a mile away and hence there isn’t much in terms of content which can keep you guessing and interested. Thus the film falters even though you are amazed by its visual splendor.

The story is that of Edith Cushing (Mia Wasikowska), an aspiring writer who is from a family of means. She had a supernatural experience in her childhood when her dead mother came to visit her 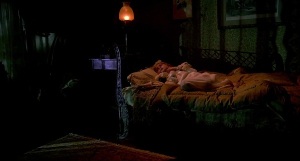 and warned her to stay away from Crimson Peak. Years after the experience, she has just finished writing a book about the supernatural which the publishers are unwilling to print as long as it doesn’t have a love story. It is at this juncture when a mysterious man walks into her life. Thomas Sharpe (Tom Hiddleston) is looking to raise money for a machine that he is building back home in England to gush out clay from his mines. Edith’s father refuses him but only after Edith has already fallen for him as he helps her with her writing by critiquing it. Thomas’ sister Lucille (Jessica Chastain) disapproves of the relation but Thomas goes ahead with it any ways. 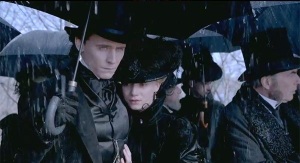 In a matter of days Thomas wins over Edith and when she is struck by a personal tragedy, Thomas becomes her pillar of strength. She marries him and then makes her way to England to Thomas’ ancestral home. Once she arrives at the mansion, she is met with a house which breathes, bleeds and has a memory of its own. She is also met with a somewhat aloof Lucille who from the very beginning disapproved of the union. Edith soon realizes that the house is called by many as Crimson Peak and remembers her mother’s warning. However it may be just a bit too late for her to escape from her fate. 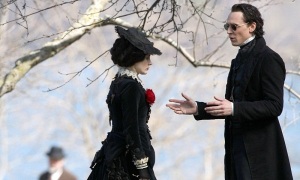 of the materials mentioned above. From the moment the Sharpes make an entry, the viewers are given a feeling that they are upto no good. There isn’t a single scene involving Lucille which would take you elsewhere and make you feel that she might be good. On the contrary, Tom Hiddleston’s character at a few junctures does feel honest and good but that feeling is washed away once the story takes you to England. Once in the house, Edith is visited upon by many spirits who warn her and lead her to clues which unlock the secrets of the sharps and then in a bizarre scene of “almost Bollywood style coincidence” she catches Thomas and Lucille in an equally bizarre state. 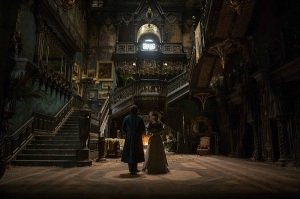 Thomas’ character evidently has a soft corner for Edith but a word from Lucille and his head turns. Lucille hates Edith and tries to kill her but not before she has made her write her wealth over to the brother and sister. Towards the end, she takes her time to explain their whole story to Edith in the most clichéd manner of exposition possible. Edith after hearing it all tries to find her way bludgeoning through the brother-sister duo. She has help in the form of a childhood friend who braves all odds to come looking for her. And to top it all up, there is a final change of heart for Thomas who finally breaks out of the shackles of his sister and fights for his love. This also appears as a tad bit too conducive for the liking. The film is essentially a horror film and it fails totally to deliver any genuine scares. I keep saying this repeatedly, that I am easily spooked by jump out moments and even the tiniest of scares but here I sat through the watch comfortably.

However speaking in terms of beauty and presentation, the film is a picture of beauty. Each and every frame is so beautifully envisioned and captured that it can be saved as wallpaper. The 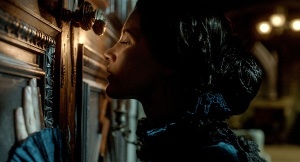 dilapidating manor of the Sharpe’s has a character of its own. The creaking floors, the howling doorways and the sensationally lit interiors are immaculately captured. There is also a vibrant use of colors which we generally don’t associate with a film from the horror genre. Brushed away colors and bluefish hues are more popular in such films but Del Toro takes a turn from the usual and does extremely well. Special mention must be made of the costumes of the film which are brilliant. 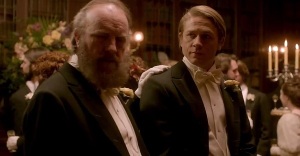 The film is laced with three superb performances which very nearly takes away your attention from the pot holes and the basic lapse of reason. Tom Hiddleston hasn’t looked back since he struck gold with the character of Loki. I just loved his act here. He is in complete control of his self while seducing Edith and later when he takes a turn for bad, he is still mighty convincing. Chastain as the evil sister who is not willing to part with his brother does really well. She is believable even in the most outrageous of scenes. Mia Wasikowska is wonderful as Edith. Sans a few scenes here and there with the ghosts where she looks a little bit out of place, Wasikowska does a wonderful job. I particularly liked her act towards the end when she tries desperately to save herself from the Sharpes.

Crimson Peak is a beautifully designed epic which lacks heart and horror. This is the kind of film which could have done well with some more thought into the plot and addition of some more chills. For a horror movie it doesn’t have enough scares. It can be watched primarily because of the visuals and the performances.