Star Wars: Episode VI – Return Of The Jedi was the third and final installment in the Star Wars Saga before the three prequels and the animated series’ and the books. This film puts an end to the story which started with Episode IV and is an extremely satisfying experience but not without its share of flaws. I utter the word flaws for the first time for this series because of the reason that I noticed some for the first time in this series. Yes the first time I felt a tad restless watching a Star Wars film was with this film. The film was beautifully set up by the Empire Strikes Back and there was no were else to go but up but for certain reasons and a few lapse in application this film does leave a few loopholes.

the clasps of Jaba The Hutt and sends in his two androids to deliver the message to Jaba. Jaba however is in no mood to let Solo go. He has practically hung him on his wall and wants him there as a decoration. Leia in disguise also reaches Jaba’s den with Chewbacca as a prisoner and her entry ticket and tries to free Solo. She succeeds in freeing him from his state but is captured by Jaba soon enough as he was already aware of her plans. 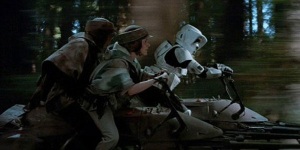 Luke walks in and in trademark Jedi style reaches all the way to Jaba and tries to talk some sense into him but to no avail. Jaba orders them to be thrown into the Great Pit of Carkoon which is the home to a vile creature called Sarlacc. Once there Luke shows his true power and after a massive battle finishes off Jaba and the others. The Empire in the meantime has been building a new Death Star like weapon which they plan to use to crush the rebellion. Luke goes back to the Dagobah System to complete his training with Yoda but he tells him that he has almost completed his training and that it will only be complete when he faces Darth Vader. Here he also learns the fact that Leia is his sister from Obi Wan Kenobi.

Palpatine himself. As the station is protected by an energy shield, Han leads a strike team to destroy the shield generator on the forest moon of Endor. Doing so would allow a squadron of star fighters to destroy the Death Star. The strike team, accompanied by Luke and Leia travels to Endor in a stolen Imperial shuttle. On Endor, Luke and his companions encounter a tribe of Ewoks and, after an initial conflict, gain their trust. Later, Luke tells Leia that she is his sister, Vader is their father, and that he must go and confront him. Surrendering to Imperial troops, Luke is brought to Vader and unsuccessfully tries to convince him to turn from the dark side of the Force. Thus a three way climax unfolds in which Luke is facing off against the Palpatine and Vader, Leia and Han are fighting in Endor to destroy the power source of the force field which protects the new Death Star and the Rebels are fighting an arial battle led by Lando against the Death Star as well as a flurry of Imperial fighters.

The film has a speed similar to its predecessors but it falters twice in the pacing. First when we have the sequences at Jaba’s den where I felt a lot was not happening even though the colorful and eclectic mix of creatures gave us a feeling of getting something new every now and then. The whole sequence leading up to the death of Jaba is prolonged unnecessarily. The visual effects in the sequence where they take the rebels to the Sarlacc’ s pit feels artificial. This was the first instance when something like this happened in the whole series. Also the whole action sequence there doesn’t give you the kind of feeling that you got in almost every action sequence of The Empire Strikes Back. A character like Boba Fett is killed off in an almost funny manner which I absolutely hated.

Once the party arrives in Endor amidst the Ewoks, the film again hits a roadblock with a lot of time devoted in creating a camaraderie with the Ewoks which really is heavy on the senses. The sequence where C3P0 relates a story to the Ewoks is an example of what I mean. It takes a lot of time for the film to get back in top gear. Here the action sequences through the lush green forests of Endor provide you with a temporary blitz of beauty and excitement but gets repetitive and stale very quickly. Again the visual effects here are badly done.

However once Luke is picked up by Vader and brought in front of the Emperor, things start looking bright again. The

chemistry between the trio is superb. The Emperor prods and teases Luke to submit himself to his hate but Luke does well to keep his distance. In the battle between father and son, Vader finally gets him to land fatal blows when he says that he will turn Leia into the dark side and make Obi Wan’s failure complete. Luke invests in the fight and gets the better of Vader. The Emperor then tries to seduce him into taking his father’s place beside him and be stronger than ever before but Luke, coming back to his senses refuses. The Emperor loses his patience and starts torturing Luke. Vader’s goodness finally finds its way out and he kills the Emperor and saves his own son. Meanwhile Han and Leia destroy the power source and the rebel fleet destroys the new Death Star but not before Luke flies out of the Death Star with his father. 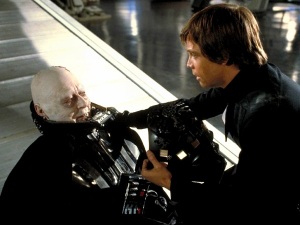 The final battle sequence is well done even though it constantly gives you a feeling of Deja vu. The emotional investment that the action sequences had in The Empire Strikes Back is sorely missing here. The characters seem to be sleep walking through their roles and many of the sequences which demanded a lot of anxiety and fear induced from the actors doesn’t get that. Remember the asteroid field sequence from Episode V and how we sat with bated breath when Han maneuvered the Millineum Falcon  through that nightmare ? That kind of thrill is sorely missing here. The duel between Vader and Luke is great to look at. The fight choreography is done well and they are the only actors of the lot who seem to have invested in the role that they were essaying. Carrie Fisher and Harrison Ford essay their parts clinically. Fisher shares a few good emotional moments with Hamill which are easily the best dramatic sequences of the film.

The score is wonderful again and really adds so much to the film. Be it the battle sequences or tender moments, the background score does extremely well to elevate the mood and feel of the moment. I have loved the score from the first two films and the third is no different. The cinematography is again terrific but not as good as The Empire Strikes Back. Overall, The Return Of The Jedi is a somewhat lukewarm finale to a classic franchise. It could have been much better but still ends up working on our nostalgia as viewers for the story and the characters. The fact that the film is laced with some great set pieces and action makes it enjoyable at varied levels.