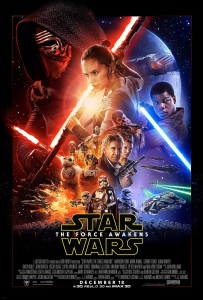 I binged every Star Wars film before I went into The Force Awakens so that I dint miss the nostalgic moments and also the tie ups to the past films. I was right in doing so as this film heavily lays back on the previous films (Episode IV in particular) and its stellar features to recreate an old story with new characters and terrifically amped up special effects. Star Wars; the Force Awakens is in no way a bad film. It is in fact rousingly entertaining but it might just not find a taker in the Star Wars fanatics. When you say that it is Episode VII, what the viewers expect is to have different story and even though old character may be repeated atleast the chronology of the events should be altered. That’s not the case here. The film almost follows Episode IV scene per scene and in doing so treads too much into known territories.

Approximately 30 years after the destruction of the second Death Star, Luke Skywalker, the last Jedi, has disappeared. The First Order has risen from the remains of 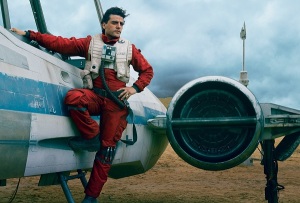 the fallen Galactic Empire and seeks to eliminate Luke and the Republic. The Resistance, backed by the Republic and led by Luke’s sister, Leia Organa (Carrie Fischer), opposes them while searching for Luke to enlist his aid. Resistance pilot Poe Dameron (Oscar Isaac) meets village elder Lor San Tekka on the planet Jakku to obtain a map to Luke’s location. Storm troopers under the command of Kylo Ren (Adam Driver) destroy the village and capture Poe but not before he has transmitted the information into his droid BB-8. The droid makes its way to Rey (Daisy Ridley) who happens to be a scavenger on Jakku. 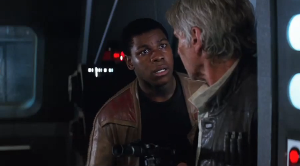 A storm trooper named Finn (John Boyega) has had enough of the murdering ways of the First Order and with the help of Poe escapes from the First Order. He crash lands in Jakku and meets Rey who initially takes him for a thief but when they together fend off an attack from the First order, they form an alliance. The task now is to ensure that the droid reaches the resistance. On their way to the resistance they meet the legendary Han Solo (Harrison Ford) and his Wookie friend Chewbacca. Together the party makes their way in the Millenium Falcon towards the resistance stronghold while being under constant attack from the First Order. There are some shocking twists and turns in the second and third act of the movie which I will not spoil for you here.

This film constantly keeps taking you back to the previous installments. The topography of Jakku is nothing but a collage of old memories. Fallen Destroyers, the land artillery carriages resembling 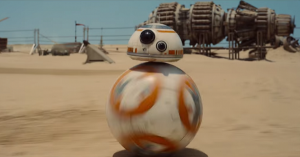 four legged animals and many more such similar Empire hardware are shown lying wrecked all throughout the planet of Jakku. When the First Order attacks Rey and Finn to take back the droid, we get our first glimpse of the Millennium Falcon. The manner in which it is introduced is wonderful. I was practically going up and down in my seat when Rey and Finn turn towards it and the manner in which it is introduced. Similar to Episode IV, the film is woven around the discovery of map which reveals itself in the third act. In Episode IV it was all about finding the plans of the Death Star that was being smuggled in R2D2. 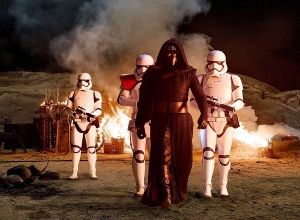 There is an important older character involved who works like a pathfinder for the protagonist. Han Solo is the man for the occasion this time. In Episode IV it was Obi Wan Kenobi. In the third act of the movie, an important character is killed by Kylo Ren which was also the case with the character of Obi Wan in Episode IV. The First Order has been stupid enough to build another Death star. While the previous two Death Stars were destroyed by the rebels in Episode IV and VI respectively, this time they have built a Death Star as big as a planet. But still our heroes find a way to destroy it. The battle en-route to the destruction of the Death Star is just as complicated and widely laid out as in the previous Star wars films.

It has to be noted that the film has a much serious tone than its predecessors. There is very little comedy and whatever little is there unfolds when Finn 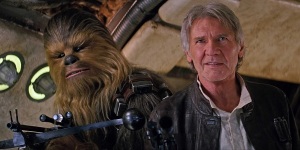 and Solo get going on board the Millennium Falcon. BB-8 chips in that department with some cute moves. The action in this film is relentless. The film moves from one action set piece to another. The fact that each of the sequences works beautifully and is complemented by a kind of reality that we have not seen in any previous Star Wars film only adds to its charm. Here a mention has to be made of the 3D which truly contributes to the action sequences by giving us the necessary depth of field to gauge especially the heights and the distances between objects. I noticed its effects especially in the sequences involving arial battles. 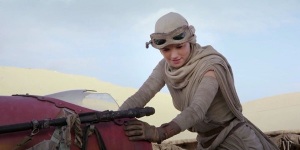 The Force Awakens is a gorgeously shot film. I mean really, one can watch this film for the glorious visuals that it brings to the screen alone. I see myself watching it atleast a few times more just to enjoy the visuals. The camera setups, the resplendent colors, the great sets and the amount of effort that went into building real worlds instead of using extensive green screen, shows in every frame and I loved it. The only complaint is with the CGI character Maz who felt a tad bit unrealistic. She stuck out in the midst of all the reality that Abrams was able to induce in his tale. The character of Snoke is wonderfully rendered. The sheer size of the projection minisculing the mighty Kylo Ren when he is facing him leaves quite an impact. The editing is perfect. The director doesn’t give in to the desire of editing it with too many cuts and thus gives us an opportunity to enjoy the flow of the lucid motion. The one to one battles are the biggest testimony of that fact.

Speaking of the characters, Daisy Ridley is just about ok as Rey. She is great towards the end. I really liked her final standoff with Kylo Ren. It is interesting to see that throughout the whole fight 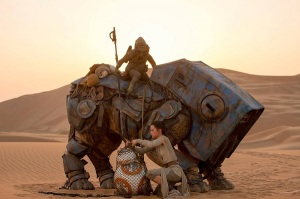 she is on the run and it is only at the very end that she realizes the strength of the force and beats Kylo. John Boyega is my favorite character of the lot. He has the funniest of lines and is in his elements right from the beginning. Oscar Issac has a smallish role and he shines in that role. I really would have liked to see more of him. Adam Driver as Kylo Ren is good till the time he takes off his mask. Once we get to see his face, the seriousness drains out as he is shown to emote. He has tears in his eyes when he is facing his father. It’s a far cry from the almost mechanical Darth Vader that we have grown up appreciating. It may be appealing to some but may be demeaning to many. Harrison Ford and Carrie Fischer are great. Mark Hamill is in the film. Yes he is! This has been a big question for many and I believe his character will be fleshed out more in the upcoming films.

On the flip side, the film is too familiar to Episode IV as already discussed. There are some shocking coincidences which doesn’t serve the realistic rendering of the plot well. I felt Daisy Ridley was weak to start with and Kylo Ren is no Darth Vader. Apart from that Star Wars: The Force Awakens is mighty entertaining. It has all the elements of an enterprising Star Wars films and the amount of realism that Abrams brings to the visuals fixes one of the only flaws that the greatest Star Wars films had. It has great characters, immersive drama and great! great! visual effects and action. Watch it for sure.