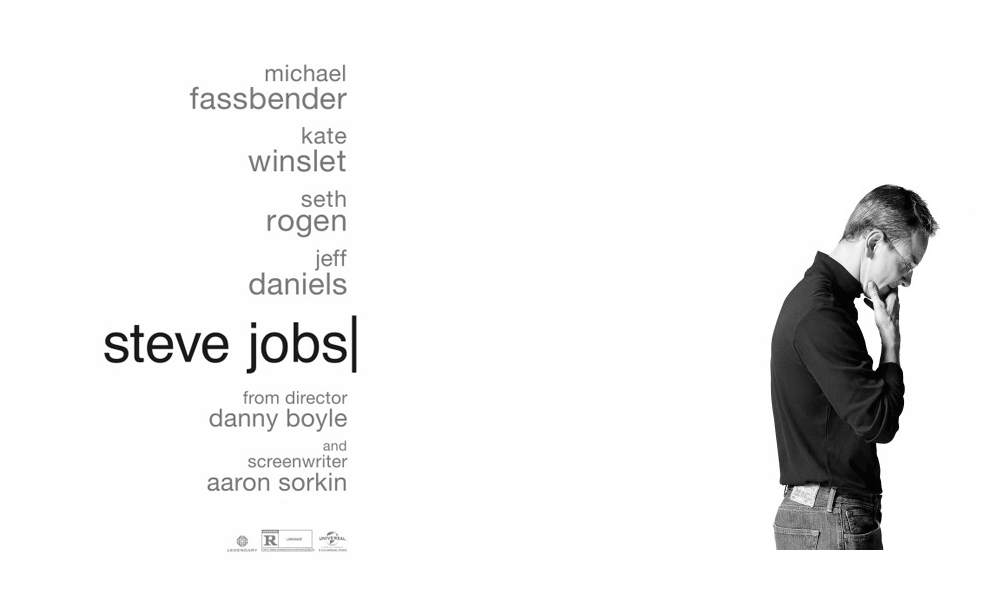 It has to be agreed that Danny Boyle is kinda late in making a film about a man whose life has already been done to death. A film, a documentary, books and even a graphic novel. Very little is left unsaid about this man and so he ran a humongous risk of being repetitive in his treatment of the story. But it’s Danny Boyle you see, the man who brought us edgy films like 28 Days Later, Slumdog Millionaire and Trainspotting and if that was not enough, this time he is collaborating with a screenplay writer who is great enough to have his name on the posters of films. The end product is one of the best films of 2015 which is not only satisfying at varied levels but is sensationally entertaining. I watched it thrice before attempting to review it as there is just so much material to take in and I didn’t want to miss anything in my analysis.

Taking a departure from all the previous films, documentaries, books and comics, Boyle concentrates on a 3-act movie which 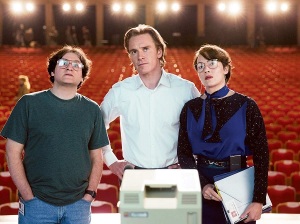 is based on three key product launches in the life of the man. These products are the Macintosh in 1984, the NEXT computer in 1988 and the IMac in 1994. As Jobs faces an audience on these three occasions, the story of his life, his triumphs and tragedies lurk in the background leading him up to facing the audience. Minutes before the Macintosh launch, the computer malfunctions and refuses to say “hello”. Jobs then goes on to the extent of threatening the voice demo designer with ruining his reputation if he didn’t fix it. At the same time he faces the mother of his child who he, till very late in his life didn’t recognize as his daughter. Strangely he gels with his daughter on this occasion as she paints in MacPaint and then in a flick of a moment accepts to pay her mother the money that they were haggling about for so long. Through this Boyle points at the eccentric nature of the man. 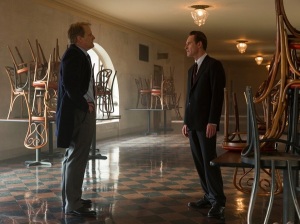 After a series of collages that show us that the Macintosh was a failure and that Job was ousted from Apple by John Sculley (Jeff Daniels) the man he brought into Apple. Next we are taken into the launch of the NEXT Computer which was a new company that Jobs found after his ouster from Apple. He is visited by Steve Wozniak (Seth Rogen) and more importantly by John Sculley and the two have a prolonged discussion about how he was thrown out of Apple. Later in this act, we are shown that Job’s making the NEXT computer and its OS was a far sighted ploy into making Apple buying NEXT and resulting in him rejoining his company as the new CEO and ousting John Sculley. Thus Boyle introduces us to the in-genuine brilliance of the man as a far sighted businessman and visionary. 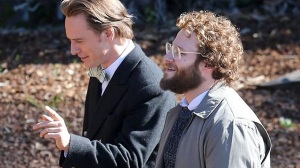 that Steve is brought back and he sort of resurrects it from the dead. He breathes new life into the company by introducing the IMac which went on to save Apple and become the fastest selling computer of all time. In this act, Steve makes up with Sculley and his daughter to whom he says that he accepts her to be his daughter and shares a very old drawing that she had made from the time of the Macintosh launch and overwhelms her by showing his fatherly emotions that he might not have shown before. Thus Boyle brings out successfully the humane side of Steve Jobs. In the three acts of the movie Boyle brings out the three facets of this man beautifully interweaving the characteristics of the man in the midst of the craze of the product launches. 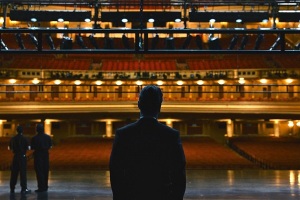 The film is what it is because of three primary factors, the performances, the editing and the direction. Fassbender brings urgency to the character of Jobs that’s unrelenting. From the first scene he has a vice like grip of your attention and as the picture progresses it just tightens. You are bound to his act and you can’t help but wait for what will happen next. I haven’t seen a film about three events before which is 100% people talking and in which the event is also not shown being as interesting as Steve Jobs is. Yes! you read it right. None of the launches are shown, there is no heightened drama involving his persona and absolutely no elevating background score to show the towering persona of the man and yet somehow the narrative is absolutely engrossing. Kate Winslet has what can be called the next most important role and she basically is the questionnaire. Yes the questions we audiences have in our mind are asked by this lady and sometimes they are answered. Seth Rogen plays Wozniak and Jeff Daniels plays Sculley who crop up at important junctures to add in to the narrative. Their roles are of epic importance as they show us the varied facets of Jobs and his manner of dealing with issues. 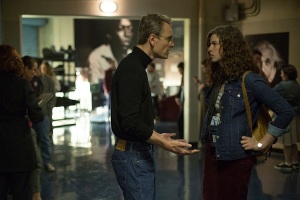 relation between Jobs and Lisa from him denouncing his relationship with his daughter to actually accepting her and naming a range of computers after her. It’s a subtle piece of drama which has to be looked closely into to be able to put a finger on. The Jobs-Sculley relation show how he deals with his aggressor and yet somehow makes peace with him by the end. The Jobs-Wozniak relation shows how rigid he can be when he just doesn’t give in to acknowledging the Apple II team even after repeated requests from the man who practically made Apple with him. 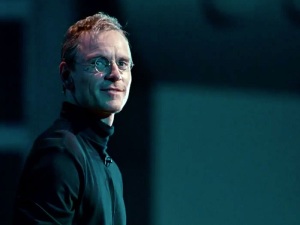 The film is shot using 16 mm film, 35 mm film and digital to differentiate the three acts and it works wonders. The editing is fast and organic and jumps quickly when it has to complementing the background score. This can be noticed more in the first two acts but in the third act the speed slows down to a great extent as if to show how the man has slowed down with time and age and become more focused and organized. The background score works as a companion piece and never really overtakes the proceedings neither does it try to be overly dramatic. This was the right thing to do. Boyle directs it with panache and the film turns out the way it does primarily because of the way it is directed.

Overall, Steve Jobs is easily one of the best films of 2015. It shows us a way of presenting the life of the man that we didn’t knew existed. I for once felt that I had seen it all as far as Jobs was concerned but was pleasantly surprised by Boyle who brought a refreshing take on the life of the man that is all too well known. Great performances, superb editing and sensational direction makes this a must watch.