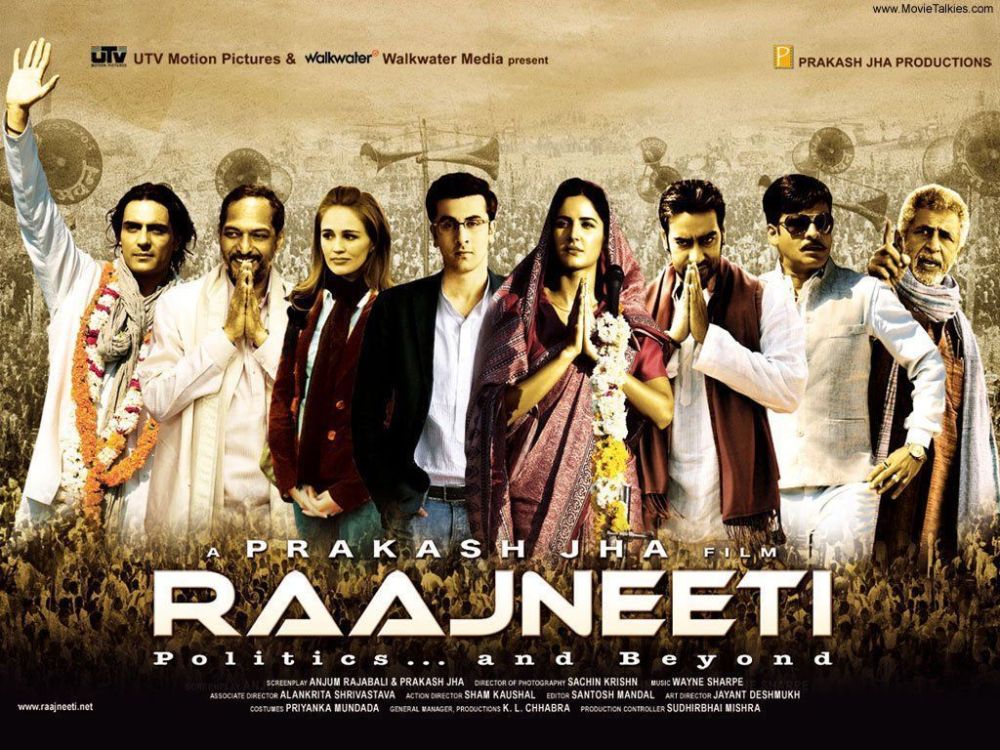 Raajneeti is considered to be the film that made the biggest splash in terms of business if Prakash Jha films are to be taken into consideration. It had one of the biggest first Fridays ever and was consistent in its lifetime. Is it a realistic portrayal of its title? No. then what was it that made the film so popular? The answer is entertainment, entertainment and entertainment. It is easily the most entertaining film that Prakash Jha has made till date. It is full of melodramatic clichés that you associate with classic Bollywood films. It has some of the most convenient coincidences that you can possible imagine in the human world and yet when you are watching the film it will all seem to make sense. It is also a film which tells you that some politicians think it to be a good idea to just kill off competition (which we know will not find a place in the world that Raajneeti unfolds) but we take that in our stride too.

Let me start with the story and this is going to be a long review simply because there is so much to discuss. The story is an amalgamation of the great Indian tale of Mahabharata and some matter

taken from Hollywood gangster films. However the inclination remains on the Mahabharata with changes incorporated to make the tale fit for the context and time also. Bharati is the daughter of a big politician who ends up having sex with Bhaskar Sanyal, a revolutionary leader at the throes of her passion. Bhaskar impregnates her then abandons her forever. Brij Gopal (Nana Patekar) who happens to be her brother dispatches her son and then forges her alliance with the younger brother of a rising politician. Her son ends up in a Dalit house and grows up to be Sooraj (Ajay Devgan)

Pratap has a heart attack and is paralyzed. Bhanu’s son Veerendra (Manoj Bajpai) sees himself as the next leader of the party while Chandra Pratap and his son Prithvi (Arjun Rampal) are entrusted the power of running the party by Bhanu Pratap. Chandra Pratap’s younger son is Samar Pratap (Ranbir Kapoor) who is in town for celebrating his uncle’s birthday. Sooraj is a self-declared leader of the Dalit’s and he wants a ticket to contest the election from a constituency. When he is insulted by Prithvi, Veerendra seizes the opportunity to take him under his wings and increase his own power. Situations soon get ugly and Chandra Pratap is murdered. Samar finds himself in a situation where he must stay back to protect his brother and unwillingly becomes a part of the “Raajneeti”. What happens next forms the crux of the narrative.

Raajneeti has an elaborate story and it is unwise to relate that in this review as simply it will either bore you or spoil your fun if you are planning to watch this film in the future. There are numerous subplots and almost of all the subplots have meaning in terms of the narrative. The story couldn’t have done away with any of those. The character of Indu (Katrina Kaif) is in line with the character of Draupadi from Mahabharata but the treatment is very different. While in the Mahabharata she was married to all the five brothers here she is used as an object to attain financial support from her father by the two brothers Prithvi and Samar.

Thus the angle of Draupadi being put up for gamble is also aesthetically covered. Brij Gopal which happens to be a name for Krishna is played astutely by Nana Patekar. He is the phenomenal fixer and he is also the one who in the end orders Samar to shoot down Sooraj and Veerendra. Sooraj is the equivalent of Karan while Veerendra is Duryodhan. Bhanu Pratap is paralyzed and a silent spectator as was Dhritarashtra. Bharati is Kunti who comes to know of his elder son’s existence and tries to bring him over to their own side but Sooraj is too much in debt of Veerendra to switch sides. He stays on as did Karan. So the film also has the much talked about Karan-Kunti dialog which evolved into many books. The finale takes a departure from the Mahabharata and makes a leader out of Indu while Samar departs for “videsh”. Somewhat tapered and conducive but still a very fitting finale if you ask me.

The fact remains that the narrative of the film remains so fast and the performences so gripping that you cannot help but fall in love with this film.

Ranbir Kapoor plays a soft mannered educated youngster who doesn’t want to be a part of his father’s political empire but through the course of the film turns out to be the most ruthless and unflinching politician of them all. Ajay Devgan’s Sooraj realizes his true roots towards the end of the film and by then it is already too late. Prithvi may not be the perfect leader but he does give his heart and soul into what he is doing. Manoj Bajpai as Veerendra is resounding in his hatred and politic. Katrina Kaif ends up a victim in the huge political game where she is played over by Samar terribly.

The film loses grip of reality every now and then. I especially had a problem with the ease in which big political leaders were killed off that too at the height of their powers. Also the conducive turnaround of relations was another issue. The climax in which all the characters go bang! Bang! was also unnecessary. However what can be sighted in its support is the fact that it is a re-enactment of the Mahabharata and the enemy had to finished but that could have been done at a political level instead of killing them off. However that in no way changes the fact that this film was extremely entertaining and engrossing.

Wayne Sharpe’s music is soothing and exceptionally well timed. Every song and the background score are in place and actually positively affect the narrative. The cinematography is great and so is the editing. Raajneeti is a complete package and a very good one at that.