Jai Gangaajal is finally here. I have been waiting for this film for a while now. Going by its title it is a sequel to Gangaajal but there is no common link between the two films apart from the fact that the story unfolds in the state of Bihar. Having said that, the film still uses every plot point of Gangaajal, just tweaks it a little and tries to repackage the same as new material.

brother W. Pandey. The men in her force are also knee deep in corruption and one of them, BN Singh(Prakash Jha) is the closest to the two brother. However as Abha starts meting out justice in her own way to the goons, the police officers as well as the “aam junta” starts getting emancipated by her actions. BN Singh soon turns a new leaf but a shocking incident involving forced encroaching, leaves the entire Police force and Abha shaken. The public is also enraged and they start taking the law and order into their own hands. What happens next forms the rest of the narrative of film. 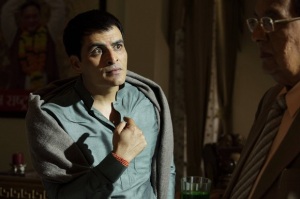 I was able to link every character in the film with its counterpart in Gangaajal and I couldn’t help but think about the previous film all throughout the screening. Priyanka Chopra dons the Khaki with aplomb but she falters in the action sequences. She looks feeble and the blows that she deals out seems childish and spoils the fun of the sequences. Sans that she holds her own in the dramatic sequences. Prakash Jha marketed the film in Priyanks’s name but the fact is that he has a meatier and more affecting role in the film then her. He proves to be worthy of the part that he gives himself and I just loved his act. The action sequences are again the let downs for his character but they are still tolerable. Manav Kaul plays the principle baddie and he is effective though not as good as Mohan Joshi from the previous film

The film has an exhaustive runtime of 2 hours 38 minutes but thankfully there is enough in the narrative to hold on to your attention. The problem is

with the fact that the whole material is repackaged from what we have already seen in Gangaajal and thus it is totally devoid of any shock value. There is absolutely nothing new in the film and that happens to be its biggest problem. Even the performances feel flat in comparison to the raw power of the men and women who brought Gangaajal alive. The film also relies too heavily on a series of conducive coincidences which helps the story forward. These are some serious downers. The change of heart of BN Singh is also very sudden and almost inexplicable. The climax is formulaic and doesn’t make any impact at all. The interest in the narrative drastically drops in the second half. Some scenes are too much to digest and they happen rather often.

Overall, I am a tad bit disappointed with this film. Even after doing a lot of good things it just falters because off some inherent drawbacks. Jha should have chosen a more unique and nuanced subject for this film which would have given the actors enough material to work with. He makes an impressive debut as an actor but doesn’t leave the sort of mark we expect of him as a director.