Of all the Marvel movies, the Captain America films have had probably the best arc developing through two very strong films into this film which is by far one of the best comic book movie ever made by Marvel. As I watched it I strongly felt that it was way better than the two Avenger films and even better than the Ironman franchise which is one of the most profitable Marvel ventures. Captain America: Civil War is laced with superheroes and strangely enough each and every one of them gets their due. When Batman V. Superman released earlier this year, I was gearing up for a climatic duel between the two worthy opponents hinted at by the title (Not so much after the 2nd trailer came on air) but that ended in a lot of pain and broken expectations. However the Russo brothers who also directed Captain America: The Winter Soldier, give you exactly what the title suggests. 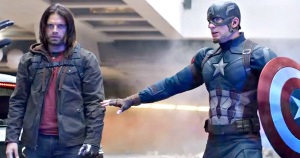 to save Captain America (Chris Evans). The result is painful. The world leaders decide that the Avengers must be brought under stricter jurisdiction and the Sokovia Accord is implemented. Ironman (Robert Downey Jr.) supports it while Captain America has his own apprehensions about it. Soon his friend Bucky aka The Winter Soldier resurfaces and is held as the prime accused in an attack on the UN in Vienna which kills the king of Wakanda. Captain America believes that he is innocent, everyone else thinks otherwise. T’Challa (Chadwick Boseman) the son of the king of Wankanda and also the Black Panther vows to kill Bucky. The Avengers soon divide into two groups and face off against each other leading to horrific outcomes.

This film is laced with superheroes. Apart from the ones mentioned above there is Hawkeye, The Falcon, Ant-Man, Vision and Spiderman. But the director duo still manages to give each and every one of them a valid reason to fight. None of them are there just for the ride. I was particularly impressed by the way the characters of Black Panther and Spiderman are cleverly interwoven into the narrative. While Black Panther is out seeking revenge, Spiderman is recruited by Ironman when he feels his team is running a little low on manpower. Even Ant-Man’s presence was well taken care off in the Ant-Man film and is just tagged in here nicely. The duel between Captain America and Ironman is superbly crafted. They both have their own reasons to do what they are doing and at times it becomes difficult to pick a side. That’s also one of the great things about this film. The fact that the matter gets personal for Ironman towards the end only invigorates the duel to a different level.

The stunt work and the visuals of this film are jaw dropping. Every time you feel that you have seen it and experienced the very best in action, they just come up with something novel. The action

is electric. There is a lot of in camera action mixed with terrific CGI and as you watch this film you are able to feel that authenticity. There are big explosions and enormous set pieces which are a combination of VFX and live action but they are gelled in so very well that they prove to be a treat to your eyes as well as your finer senses of artistic beauty. Special mention has to be made of the action sequence between all the Avengers at the airport. There are a few surprises waiting for you there.

Performance wise, the ensemble cast does a great job. If you are to pick two people it has to be Robert Downey Jr. and Chris Evans who have the meatiest roles but the others lend an important hand every now and then making their presence felt. Elizabeth Olsen looks beautiful and acts well to make you believe in the character that she portrays. Boseman as The Black Panther nailed it. I have little idea about his background but his act really got me hooked and now I am really interested to see where his character goes. Tom Holland plays Spiderman and boy he is a refreshing change. His rendering of the character is one of the best that I have seen in years. I am not a hater of the Amazing Spiderman Films but his act is really really great and casts a shadow on the previous three films at-least. I wonder what he could do in a standalone film. Scarlett Johansson is great as Black Widow and so is Paul Rudd as Ant-Man.

Why is this film so great? It has a working plot. The characters make sense. The reason and logic behind what they are doing is well explained, fleshed out and again makes sense. There is some terrific and jaw dropping action sequences which really makes you cheer and jump out of your seats. There is just enough comic relief to tickle your funny bones once in a while. There is enough drama and seriousness to make you care for the characters and understand their problems. It is a more serious film than the previous Captain America film and it has a bravura climax with a twist that creeps up on you. This film couldn’t have ended any different. I just loved it and I feel that you all will love it too. Go watch Captain America this week. I am giving it 4.5 stars out of 5.