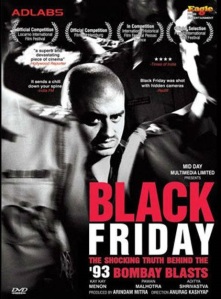 Black Friday is the definitive Anurag Kashyap film of all times. It is in so many ways better than his most acclaimed film “Gangs of Wasseypur”. This was a film which was banned for a long period of time because the authorities felt that if this film released before the Bombay blast verdict was declared, it would influence public opinion or for that matter the judgement. Such was the power of the film and the authorities did well to understand it. The film was finally released in 2004 and went mostly unnoticed. But it’s whooping IMDB score and Metacritic rating shows us how popular it is with the thinking man all across the globe.

However, that being the case, the film got unnecessarily delayed and it lost a lot of shine for the masses and was not exactly the commercial

success that it should have been. For me however, it was still mighty entertaining and till date I watch this film atleast a few times every year on home video. What I love most about this film is its honesty and its simplistic portrayal of a matters of utmost importance. Here is a film dealing with grave and important matters like the Bombay Blast and yet it is able to remain close to the real life instead of being unnecessarily dramatic.

The film is based on the book “Black Friday – The True Story of the Bombay Bomb Blasts” by Hussain Zaidi. Zaidi is famous for writing stark and fearsome works about crime and criminals and this was a book that brought him under global limelight. The story revolves around the planning, inspiration and execution of the blasts. It follows it up with story of the arrests and then the cracking of the case with lucid explanations of the motives of the assailants and how they came to be what they were. The film also throws light on the inspiration of Tiger Memon, the chief conspirator of the blasts and shows us how personal his reasons were. All this unfolds in chapters. While the first half mostly concentrates on the execution of the blasts and the pursuit of the leads of the criminals, the second half is about deciphering the motives behind the crime and an in-depth look into the lives of the perpetrators.

As is the case with most Anurag Kashyap films, Black Friday is laced with tremendous performances. Pavan Malhotra plays Tiger Memon with such panache that for a long duration of time you associate the real man with his portrayal. There is such a sense hatred and angst in his act that one can easily relate the things he does to his feelings. The final speech that he gives about how to bring the Hindus to their knees, with which the film also ends, is stupendous. There are moments when his voice chokes. Splendid essay there by Pavan Malhotra.

Kay Kay Menon plays the cop entrusted with the task of nabbing the terrorists. His character does things that he believes in and sometimes things that gives him nightmares but

he firmly remains on track.  Menon like Malhotra is starkly real and leaves a strong impression on the film. Aditya Srivastava  plays one of the most important terrorists, Badshah Khan and he plays it with such panache that I am shocked how come he never got anything more substantial in the future. This was also a film which introduced us to Nawazuddin Siddiqui and he in his brief role is terrific. I will sum up the performances by saying that each and every performances in the film is brilliant and each of the actors do their job perfectly.

Technically speaking, the film is fine. I cannot comment much on the visual quality as I have seen this film mostly on the Eagle DVD that I own and in those days a lot of the quality and contrast was lost in the rendering process. Thus I may comment on the editing which is resplendent but no so much on the visual quality. But I have learnt that the film was shot in the guerilla style. I just wish and hope that I get to see it in theaters someday. Anurag Kashyap films are mostly superbly edited. He takes his time to edit his films and that shows in the final content. Black Friday is not only a film strong on content and quality but also has a big heart. It takes some serious risks in terms of the subject that it deals with and comes out trumps. Watching the film today, I constantly feel that it was way ahead of its time. If it was made today, it would be lapped up without asking too many questions. The content too will face a lot lesser flack now than it did in the yester years.

Black Friday is my favorite Anurag Kashyap film till date. Its sheer scale, quality, performances and heart sets it miles ahead of all the rest. It is easily one of the best Hindi films ever made and deserves a place right up there on every best Indian film list ever made. Watch this piece of art as soon as you can if you haven’t already.