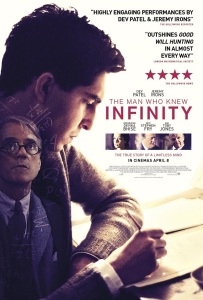 The Man Who Knew Infinity is a retelling of acclaimed Indian mathematician S. Ramanujan’s life from his initial years in India trying to find a decent living and get his work published to his journey to England where under the care and guidance of G.H. Hardy, he made sweeping discoveries which would go on to shape the way people looked at many mathematical concepts. The film also shows how hard he had to toil to establish his theories and also that ultimate moment of bliss when he is accepted as a fellow of Royal College. The film not only shows his struggle but devotes ample time to show the efforts of Hardy, his mentor to ensure that he gets his due.

This isn’t a film for all. Even though it has enough material to stretch its narrative to

2 hours, the content will appeal only to those who have a knack for slow burning tales where the emphasis is more on the performances than the dramatic twists and turns. We are all aware of the story of Ramanujan and what he came to be. Thus there is no surprise element in the tale also. The film heavily banks on the performances of Dev Patel as Ramanujan and Jeremy Irons as Hardy and thankfully their acts are absorbing enough to hold on to your attention. The film has a brief lull at the beginning when Ramanujan is in India, toiling his way to breaking free. These are the scenes that are a tad bit preachy and somewhat boring.

Once he arrives in England, the proceedings get faster. The initial time is spent in establishing Ramanujan’s prowess and then the narrative shifts to the development of his uncanny friendship and association with Hardy. The film has its strongest moments when the two are communicating. While Hardy wants Ramanujan to prove his theorems, Ramanujan is shocked at Hardy’s disbelief of his Theorem’s validity. It’s delightful to see the expressions of Dev Patel every time Hardy calls his solutions intuitive and his brilliance intuition. The scene where Ramanujan lashes out at him is one of the strongest scenes of the film. The picture is carried forward by this kind of scenes that happen often in the second half.

Dev Patel is a good actor when he gets a role that suits his personality. He was good in Slumdog Millionaire and he 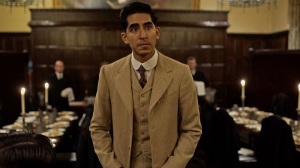 is brilliant here. You can actually feel his desperation and angst in scenes where he lashes out. The portion where he is sick is also extremely convincing. Even his romance with his wife, which to a large extent was fictional is very convincing and touching. He shares a great chemistry with Irons who in his own act is great. He plays the mentor to perfection. He is cold and uncaring to start with but gradually warms up to Ramanujan and finally understands the limitations of his brilliance. The manner in which he fights for the man is wonderfully brought out in the scenes towards the end. These scenes also lead up to a great climax which is thoroughly fulfilling.

The film’s cinematography is good. Even though there wasn’t much to capture apart from interiors of classes and rooms, the DOP presents the visuals with a flair. Sufficient close-ups and lingering shots help express the feeling of the characters wonderfully. The background score is apt. However, every time we are shown South India, there is an overt desire to play the flute in the background. This is a change I have noticed ever since “Life Of Pi” made such wonderful use of the instrument to express an organic feel. However the same may not be applicable everywhere. Here it gets a tad bit repetitive. The editing is in keeping with the style and speed of the narrative and leaves no room for any complaints.

As mentioned before, The Man Who knew Infinity is a slow burning fuse. It will be liked by people who have a fetish for biopics and those who don’t mind sitting through a tale that has a leisurely pace. If you are willing to invest in the tale and the performances, this film has a lot to offer. I had a great time with this film and I believe every thinking viewer will too.