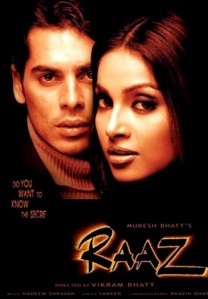 Raaz released in 2002 and it was a sleeper hit. Horror films haven’t worked as well as some of their western counterparts and the reason for that is simple. The Indians have a cheesy way of making films which don’t actually work in terms of horror films. Raaz, however, was an exception. It was cheesy in many aspects but what it did right was to introduce an interesting story that didn’t give itself away right till the third act. The big reveal was also done in an interesting manner leading up to the climax which gave even the ardent of horror enthusiasts some creeps. The film was somewhat inspired from the Hollywood flick “What Lies Beneath”. I was also able to see some key plot points and characters inspired from Ram Gopal Verma’s terrific horror flick Raat.

The film starts with a voice-over from Sanjana (Bipasha Basu). She is the protagonist of the film

and she speaks about her life in Ooty where she found the love of her life, got married and became a true woman which obviously points to her losing her virginity on her wedding night. It might not sound much to people who are not Indians or for that matter even Indians born after 1990, but it is an important line as it assumes importance towards the end of the film when the question of adultery is raised and associated with all her tragedy. To Indian women losing their virginity to their husbands and being with that one man all her life means a great deal.

We are then introduced to a gang of college students who are apparently on a picnic. As a girl and a boy run amuck in the nearby forest, the girl is suddenly possessed by a force and she violently attacks the boy. The boy escapes and the girl is brought into the hospital, where she deliriously shouts in strange tones that she is back and will not leave those who wronged her. At the same time, Sanjana has a scuffle with her husband Aditya (Dino Morea) miles away from Ooty in Mumbai and as she drives away recklessly being in pain, she meets with an accident but escapes without a scratch. Aditya realizes his mistake at ignoring his wife and not being able to be by her side when she needed him and quickly apologizes to her. He requests her to give him one last chance to rescue their fading relation. Sanjana asks him to take her to Ooty where they may try to rekindle their romance much like how they fell in love and married years ago.

This part of the film feels a tad bit melodramatic and superfluous. We are never shown the reason for the distance between the couple which would have really helped to strike a inevitability. There is also no reason shown for Sanjana’s addiction to the sleeping pills. The initial song that sets up the sequences before the accident is jarring and really pushes the button on your patience. Aditya seems like a guy who is jilted and irritated of Sanjana’s behavior for a while now. We know this from a brief interaction that we witness between them before she drives off. So his sudden change of heart feels a tad bit corny. However, once in Ooty, he tries to get back the sparks between them but Sanjana is very distant. She never misses a chance to blame him or for that matter a single dose of her sleeping pills. He even gets help from their common friends to get near her but that also doesn’t seem to work.

voices. A spirit starts trying to make contact with her in some of the weirdest ways imaginable. She tries to convince Aditya of the manifestation but he doesn’t believe her. This ruins their relation even further. Sanjana is obsessed to find out the truth behind the manifestations. She takes the help of a professor played by Ashutosh Rana to get a hold of things. But nothing fruitful happens. Aditya is called out to Mumbai for an important deal and Sanjana is forced to stay back at the house all alone. On the advice of the professor, she tries to make contact with the spirit and she succeeds.  By the time, Aditya comes back, she is possessed and as she tries to force herself on Aditya, a shattering truth is revealed which explains the supernatural occurrences.

This portion of the film is loaded with chills and surprises. The drama works for the first time and even though the dubbed voices of Bipasha and some of the cast members proves to be a stickler, the narrative holds on to your attention. The scares are aplenty. Even though the visual effects may seem dated in today’s time when we have seen much better effects, in the year when Raaz released, it was not bad. Pushed forward by Bipasha’s honest act and Ashutosh Rana’s over the top but engaging essay, Raaz purrs along just fine. The background score and the sound mixing is also good for that period as some real atmospheric scares are generated. Even though the film displays almost all sorts of horror cliches that are all that familiar to us these days, at that time they felt chilly.

In the climax of the movie, Bipasha is forced to fight

the spirit who now possess the professor and is trying to stop her from burning up the spirit’s mortal remains. Aditya’s life hinges on whether Sanjana is able to vanquish the spirit or not as he meets with a severe accident, orchestrated by the spirit and is near death. The spirit wants to take him along with her to the other world and can be stopped only by a true “Suhagan” (Hindi word for a pious married lady). Here again, I would like to bring back to memory what I had written about the initial voice-over by Bipasha’s character where she mentioned about her life in Ooty. The idea of that speech was to convey how dedicated she was to her husband and how pure she was in being a true wife. A woman for only one man. On the other hand, the husband went ahead and had an adulterous fling with another woman who is referred to as a “Randi” (prostitute) who then tries her best to break him away from his true love. Thus dedication is shown as the virtue of the good and adultery as that of the weak and evil. Sanjana is, in the end, able to defeat the evil and win her husband back owing to the strength of her nobility.

Bipasha Basu has since starred in many horror films including Raaz 3 but her performance here remains till date her best performance in a horror film ever. Dino Morea is a cardboard as far as expressions go and thankfully his role is not that long. He can be tolerated and that’s saying a lot about his act. The rest of the supporting cast do their bits OK. The director does well not to reveal his cards right till the third act and that helps keep the tension and excitement of the film. For all those who don’t find the horror alluring will have at least something to cheer for in the story and the twists and turns.

Overall, Raaz is the strongest film in the Raaz franchise and till date remains their biggest hit of the franchise.