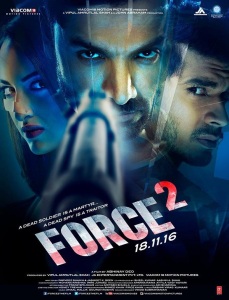 Force is a perfect example of Bollywood-action trash that carefully hides itself behind the façade of a film that deals with RAW and international espionage. However it holds on to that façade for just about 5 mins of its runtime. Don’t be fooled by the initial homage paid to the men and women of RAW who have laid down their lives for the country in the trailers or at the beginning of the film. This is in no way a story about their dedication, wok or patriotism. This is a film about John Abraham flexing those shapely muscles of his so that you can drool over him. It is a film about Sonakshi Sinha mouthing intelligent lines and yet remaining as unconvincing as ever. This is another film where Tahir Raj Bhasin tries to be an uber cool villain who has a penchant for talking incessantly and nearly pulling it off after “Mardaani”.  Having said that, Force 2 still ends up being sparingly entertaining. 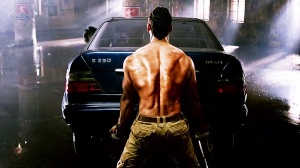 leaking the names of RAW operatives in China to the Chinese government. In the most Bollywood-ish manner possible, Yash is touched by the Gods from heaven and is bestowed with their powers of “know it all”. He tracks down Shiv within hours of their arrival and he is so sure about his infallible hunch that he even tells KK that he is the man they are looking for. A few action sequences later, they catch Shiv and set out to deport him to India. However, the task turns out to be much more difficult than what they had expected. Meanwhile, questions like, why Shiv is doing what he is doing? What is his plan? keep piling up as do the body counts.

This is a film with absolutely no brain. It’s a flat and straight forward narrative with the most tried and tested and simplistic resolutions to problems that you could have asked for. However, the film scores on two or three major points. John is good. He is back in his elements after a somewhat lukewarm Rocky Handsome. His physicality is of great help. He bludgeons through people, he breaks through walls and he plummets architecture in great style. He is grumpy almost throughout and since it’s the only expression that he is able to exude without being exposed, he looks convincing. Thankfully they do not give him any lovey dovey time with KK and that really helps the narrative.

The next biggest plus is the action. The film has more action than Force and Rocky handsome combined. The chas

e sequences are well done. There is a lot of physicalities involved and the impacts feel very real. I also enjoyed the hand to hand action sequences. Even in the presence of evident wire-work, the action felt smooth and powerful. The editing in these sequences was good too. However, the only complaint I have with the action was that of the last action sequence wherein first person perspective was used and shown for a longer duration of time than it was needed. Also, it was very tackily done that showed a lack of either budget or willingness to finish off with the fine edges in the post production work.  The film has speed on its side. It moves briskly from one point to the other and would serve as an interesting watch for those with lesser minds. Abinav Deo has directed fast paced stuff like 24 and Delhi Belly and so he is comparatively at home with this style.

Coming to the shortfalls, Sonakshi Sinha as a RAW agent hams. She is incredibly miscast and looks and talks like a complete misfit. While she did good action in Akira, here her character is so stupid, annoying and weak that you do not even feel pity for her. Her acting prowess is also not much to talk about here or anywhere else and that has been proven every now and then. Tahir Raj Bhasin has been getting a good buzz for his act. But I really didn’t buy into his act. He is smooth and cool but his constant verbal assaults start getting too much to handle pretty soon. Also, his character and his motives are very poorly written. Even his plan and modus oparandi to extract revenge makes little sense. The film is predictable and you see the twists and turns coming from miles away.

Overall, Force 2 entertains you the first time around with its pace, action and John’s act. However, I am sure that this is a film that you cannot watch a second time around. All those who are looking for meaningful fare must steer clear of this one. It’s nothing more than a mindless Bollywood junk that you might enjoy watching once.