Ben Affleck has been prolific over the years. Be it acting, directing or for that matter just being uber cool. He has been instrumental in raising the bar of many films simply by his presence. His previous outing this year was as Batman and he simply redefined the character in his own style. That was a particularly hard feat to achieve considering the fact that Christian Bale nearly immortalized the character with his brooding act in the Christopher Nolan films. But one has to agree that Affleck has somehow managed to surpass his act. Be it physically or for that matter in his mannerisms. The accountant is his latest offering which stars him as an autistic forensic accountant who is not exactly a good guy. He does forensic accounting for some of the most feared people on the planet.

For all those of you who don’t know what a forensic accountant is, it’s practically an accountant 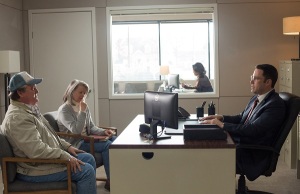 who helps find out leaks and missing money and similar cases of fraud within an organization when their own people are either involved in the travesty or are unable to find the missing mullah. If done for a white collar client, its fine but when you are looking at the books of drug lords, smugglers and international terrorists, it becomes quite a profession. Our accountant here also has a set of sensational skills with weapons and hand to hand combat that he learned from his father who was a colonel in the US army. Trying to go for a change, the accountant lands up with a white collar client who turns out to be his biggest threat till date. He not only has to leave his work incomplete (which is rather hard owing to his condition) but is also hunted by a group of skilled mercenaries when he finds out what they wanted him to find and also not find in the first place. Thus begins a whirlwind adventure peppered with action, chase ans loads of twists and turns.

I loved this film from start to finish. sans a minor issue that I will discuss in the end, the film was so devilishly entertaining that even the exposition-heavy sequences turned out to be gripping. I generally don’t prefer the exposition-heavy sequences but in this case, they were laid out so well that in fact they turned out to be hugely entertaining. These were the sequences where we actually got to know our accountant better. The whole film unfolds in a linear fashion in the present time jumping from time to time to the past where some pieces of the accountant’s past are revealed and thereby making him a little more interesting to us in the present day.  The scene where his mathematical prowess is revealed is gripping. It may be just a man crunching numbers but the manner in which it is depicted is just awesome.

well as hand to hand combats. The final climatic battle is the best. However, there are many bits and pieces action sequences that will grab your attention. One of my favorites was the one that happened in an apartment where our accountant goes to save a girl from certain death. The film also has its share of comic moments. Most of it arising out of deadpan humor of the accountant himself. It is also a film that is very well shot. It’s really difficult these days to expect non-jerky and clean camera movements in the action sequences. The accountant excels in this department as we are able to see the action in its ravishing beauty. The movements are fluid and the actions very physical.

Apart from Ben Affleck, Anna Kendrick has an important role and she suits the role perfectly. Her character spends a lot of time in awe of how the accountant is and it’s hilarious at many junctures. J.K. Simmons is in his elements even though he has a shortish role.  Jon Bernthal plays a character that he is beginning to get type-casted playing as.  My only complaint with the film was that the antagonists were not of a level befitting the abilities of the protagonist. The accountant gets the better of the villains so easily in the end that you have that strange feeling of dissatisfaction that you didn’t feel throughout the film. It’s a pity for a film that was so engrossing to end in such a manner without its hero being duly challenged. But the fact remains that the rest of the film is so very good that the last few hiccups can be ignored.

Overall, The Accountant is an immensely entertaining fair with everything to keep you hooked. A suave Ben Affleck, some electrifying action sequences and a great plot are just a few things that will grab you attention in this whirlwind adventure.  The Accountant is everything that an action adventure should be.