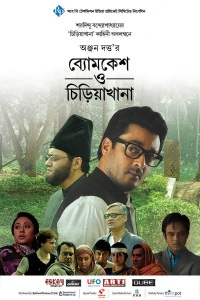 Over the last few years, the Bengali film industry has meta morphed into something that it should have become years before. The influx of fresh and contemporary talents in varied disciplines has practically changed the way Bengali films were made. It’s true that one could easily point out auteurs like Satyajit Ray, Mrinal Sen, Ritwick Ghatak were there in the yester years who were actually renowned and revered world over but it cannot be ignored that Bengali films became commercial caricatures in the late eighties and nineties. The same buffoonery still exists if you look at the more popular cinema wherein you will find titles like “Challenge”, “Badshah”, “Chiro Dini Tumi Je Amar” etc and films wherein the hero is the same old singing-dancing-villain bashing caricature who lit up the Bengali silver screen before.

But thankfully there is a parallel Bengali cinema that has developed over the last 10- 15 years or so. Cinema that is helmned by people like Anjan Dutta, Srijit Mukherjee, Arindam 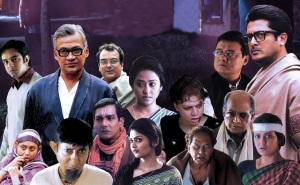 Sil, Aparna Sen, Aniruddha Roy Choudhury and many others. Cinema that is realistic, entertaining and thought provoking. Cinema that is minimalistic and reminiscent of the best things about the auteur-istic cinema of people like Vittorio De Sica or François Truffaut or Ray himself. I may have gone a tad bit too far in pulling parallels with such great names but the directors here are surely on the right track. Of all these films that are made every year, the brighter ones are the murder mysteries and among them, the brightest are the Byomkesh and Feluda films. It may be just me but I just loved each and every one of these films. Byomkesh O Chiriyakhana is no different. 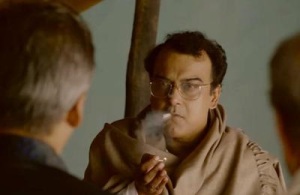 Byomkesh (Jisshu Sengupta) is contacted by Mr. Nishanath Sen (Shantilal Mukherjee) who wants him to visit his colony and lay rest to a case involving blackmailing and a struggling actress who might be linked to a series of crimes. Once in the colony, Byomkesh is intrigued to find that each and every one of the residents has some sort of a criminal background. Strangely After their visit, Nishanath calls up Byomkesh and requests him to stop his investigation. But that very night he is murdered and Byomkesh takes it upon himself to solve the murder. As he dwells deeper and deeper into the lives of the people of the colony he realizes that each and every one of them had a motive or two to kill Nishanath. Soon another person is killed on Byomkesh’s watch and he pledges to solve the crime or stop being a seeker of truth altogether.

This is another of those near perfect Byomkesh Bakshi films. Anjan Dutta directs it in his trademark style and even though the whole screenplay is just a bunch of people talking, 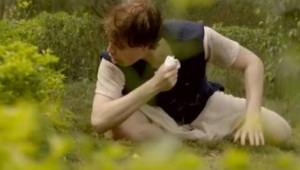 you will be glued to the screen. The proceedings are kept so precise and the screenplay so tight that the viewer hardly gets any room to breathe easy. The first 10-15 minutes is spent in the necessary introductions and they are key to the puzzle. Post the murder, the narrative picks up a breakneck speed that it never lets off till the very end. The interrogations don’t take you closer to the murderer but instead confuses you further with the protagonist. As Byomkesh peels out layer after layer of the plot, you bear witness to the unfolding. There is an interesting character introduced towards the end of the film who has absolutely nothing to do with this story but will attain meaning and importance in the films to come in the series.

Jisshu Sengupta is fast becoming a more comfortable and likable Byomkesh than Abir. He not only has the dadagiri that we associate with the character but is also sublime in dealing with the different mood swings of the character. He is in top form here and so is his able aid Ajit played by Saswata. There is very little praise that I haven’t showered already on Saswata and he deserves every bit of it. What I like most about these two actors is the amount of simplicity that they bring to the roles. The “natuke pana” (dramatics) is shunned by these people in a manner as if their lives depended on it. They also share a wonderful camaraderie which brings further gloss to their essays. Ushasie Chakraborty as Satyabati has little to do and yet is perfect whenever she appears on the screen. Shantilal Mukherjee as Nishanath Sen is apt even though I felt that he is getting stereotypical in his roles especially in the Byomkesh films.

The film is shot well and edited with panache. The background score is reminiscent of the previous Anjan Dutta Byomkesh films and is all too well known and popular to raise any complaints about. The film is packed with every ingredient that was required to make this film a mouth-watering affair. The fact remains that it has a solid base in the works of Sharadindu Bandyopadhyay but the director’s eye for detail and his transformation of the literary piece to the visual medium is equally laudable. This is a film that can be watched and enjoyed by one and all. The lovers of the genre will cherish this film for a long time while the others will merit it as a fun and absorbing watch. Kudos to Anjan Dutta and team. Now I am eagerly waiting for the next one.