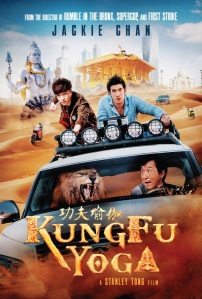 In preparation for this review, I watched Stanley Tong’s previous collaboration with Jackie Chan, “The Myth” yesterday night. If one could take his/her eyes off the excruciatingly bad CGI and confusing storyline, “The Myth” could be a decent one time watch. There was plenty of action (both past and present included). The film looked pretty and Jackie Chan was adorable as he is always. The inclusion of Mallika Sherawat, who was hot property at that time, only made matters that much more interesting for the Indians even though her role was of blink and miss length. Hence Kung Fu Yoga wasn’t a film to be ignored for me. It’s also a fact that I really enjoy treasure hunt films even though, they are seldom good these days but still, I cannot ignore the rush of it.

“Kung Fu Yoga” unfolds years after the incidents of “The Myth”. The famous Chinese 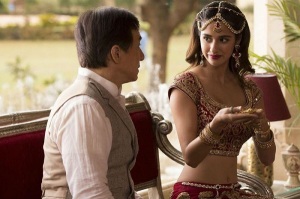 Archeologist, Jack (Jackie Chan) is back and this time he is invited by his Indian counterpart, Ashmita (Disha Patani) to locate and find the lost treasures of the Magadha Dynasty in India. Once on the trail of the treasure, Jack faces stiff competition from Randall (Sonu Sood), the last descendant of the general who revolted against the Magadha Empire and tried to lay siege on their treasures. His quest takes him from china to the icy mountains of Tibet and from the rugged terrains of Dubai to the majestic beauty of the Royal India. 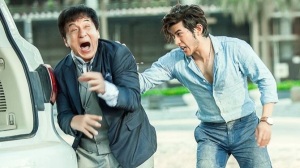 is an upgrade on “The Myth”. Everything from the story, to the MacGuffin we are after to the action to the visuals, are all amped up to suit the modern times. The film does excel on a few departments and I will start off by bringing those to the fore. The visual effects in most of the sequences if not all are tremendous. The sequence involving a lion in a car with Jackie Chan was as much hilarious as it was graphically well done. Some of the underwater sequences looked beautiful and so did most of the action sequences. Even the CGI hyenas looked good. My only complaint was with the first 3D animated sequences. It should have been done with real people. Not only did it look bad, it to a great extent liquidated the seriousness of the whole plot.

The film maintains a breakneck speed. It unfolds so quickly that even a momentary lapse of 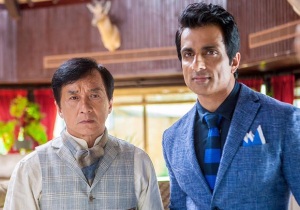 attention will result in you missing a point or two. This speed serves two factors. Firstly it keeps the plot interesting and never lets you get bored. Secondly, it helps to keep your attention away from the flaws, cheesy dialog, and bad performances. Jackie Chan is likable as ever. He may have aged but the flamboyance and the moves are all there. He not only makes his character believable but also ensures that you have a great time with his trademark humor and mannerisms. He is also very apt in the action sequences. The fights have great physicality to them and Chan doesn’t make a single bad move.

Disha Patani and Amyra Dastur both have sort of meaty roles but they really don’t have much to do apart from flexing some muscles here and there or looking scared and shocked at so many other sequences. They are the perfect stereotypical heroines of a Jackie Chan film and hence I have no complaints from their act. 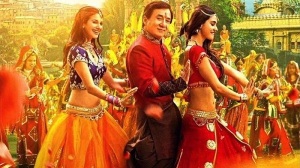 Coming to the negatives, the film’s story is too pristine and kiddish to advocate any serious emotional impacts and hence is highly liquidated. You never care for any of the characters neither do you get engrossed in the tale. It’s all a collection of thrilling sequences, which, if you can see with an open mind, you are bound to enjoy. However, any attempt to look for logic, reason or explanations will be futile. You need to remember that this is one of the most over-the-top and nonsensical treasure hunts that you can possibly get into. Imagine the principal baddy breaking into a dance with Jackie Chan at the end of the film. That’s how logical this film is. Were you expecting anything else?

The initial CGI rendering of the backstory looked horrendous. Sonu Sood is terrible. He was 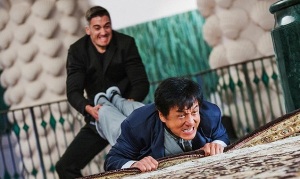 just beginning to look good in Bollywood films but here his character is so badly written and the manner in which he sleepwalks through his role, his performance was easily one of the weakest points of the film. The film’s editing is very choppy. Poor editing can be sighted in two ways. 1) Scene to scene transformations which affect the speed and tempo of the film and for people like me who are slow at picking up plots, the understandability. 2) Editing of the sequences which includes what is shown and what is not in a particular sequence. The film suffers in both the points. I couldn’t help but notice numerous flaws which terribly affected the overall appeal of the film. There is no “Yoga” in the film. The title is just there to attach the Indian-ity to the title.

Overall, “Kung Fu Yoga” is a better film than “The Myth” simply by the scale of it and the upgrades. It is entertaining. That has to be given to it and coupled with Jackie Chan’s spirited act. It will be a fun watch for one and all. But please don’t go in with any more expectation. This is just a “watch and forget” crowd pleaser and thankfully it never tries to be anything more.