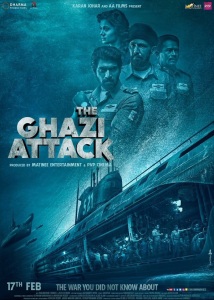 Oh, thank God! for once someone tries something different and pulls it off well. I have over the years got so tired of watching the same stuff over and over again from the Indian film industry that nowadays, I skip many films just by watching their promos as I am well aware of what I am about to be dished out. “The Ghazi Attack” quipped my interest right from the first trailer of the film. It was touted as the first submarine war story and that in itself was a difficult thing to pull off. Submarines are claustrophobic and have very less room to stage sequences. The characters have to be interesting and the actors have to have their performances spot on for the story to have any kind of impact. So it was extremely interesting for me to see how “The Ghazi Attack” would fare.

Directed by Sankalp Reddy, here is a film that proves once again that if you have a good story to tell and know how to tell it well, lacking in the

technical department can be made up for. The story revolves around the crew of INS S-21, a submarine entrusted with the task of recce. The submarine is supposed to check the Bay Of Bengal for possible hostiles and report back. Little does the crew know that they are about to come face to face with a far more superior and lethal Pakistani Submarine named Ghazi sent secretly by Islamabad to sink the INS Vikrant that is standing in the way of the East Pakistani army being reinforced with food and ration. What follows is a two-hour long whirlwind adventure that ultimately pits the wits of the two parties involved against each other to determine who lives and who dies.

The Ghazi Attack is a riveting watch. It has an interesting story to tell and it tells it well. I cannot remember of a single sequence or patch of time when I was not hooked to the narrative. The film maintains a brisk pace and smoothly moves from one point to another. The tale feels nicely woven and there are no jerks to take you out of the experience. The screenplay leaves little room for unbelievability and apart from a couple of characters, every character has a well-defined role and does well in it.

Kay Kay Menon plays the captain of the ship and even though he is a tad bit too loud, the man is so likable and believable that you cannot help but fall in love with him. He is an extremely expressive man and that shows in the range of emotions that he puts on display. He carries the film on his shoulder until Rana Daggubati takes over for him. This brings me to the biggest surprise of the film. Rana Daggubati was a revelation. He was kept so reserved and he did it so well that I was speechless. Frankly speaking, He was the biggest question mark for me when I was going into this film. I don’t hold his acting skills in high regards but he completely took me by surprise today. He not only acts well but nearly pulls off the impossible of being better than Kay Kay Menon. Atul Kulkarni is a brilliant actor. We all know that and he doesn’t disappoint.

Speaking of the performances, my first complaint about the film was the character of Tapsee Pannu. That was a character that had absolutely no room in the plot. Tapsee is a great 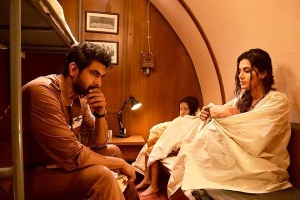 actress and she was not only wasted in that role but also terribly undermined. There was another character in the film who was playing one of the mechanics of the submarine. He has an unnecessary banter with the character of Atul Kulkarni towards the end. That was another sequence that felt truly out of place as it went nowhere. In a film as tight as this one, even these sort of minor flaws are easily noticeable. 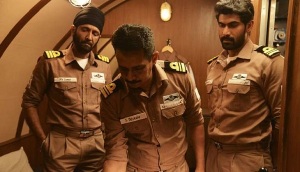 My final and the only major complaint with the film was its visual effects. Even though they are few and far apart, they do hit the film here and there. Even if I ignore the many sequences where the horrendously fake submarine is shown in long takes, they didn’t even get the explosions right. That’s pretty basic these days. When you set out to make a film of this sort, that’s one thing you have to take into account. The makers could have easily invested a bit more on the visual effects and that would have gone on to really propel this film higher. But that’s not the case here.

Having said that, I still feel that “The Ghazi Attack” is a very well made film which is highly entertaining and engrossing. Sankalp Reddy and his team have tried something different for a change and have been able to nearly pull it off. While the film boasts of stellar performances and wonderful thrills, it will surely churn out that ever present patriotic feeling in you towards the end. That’s always a good thing for the Indian masses and that hooked me too. Watch “The Ghazi Attack” for sure.