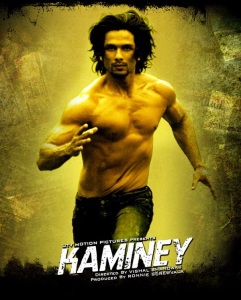 Vishal Bharadwaj’s Kaminey was different. It wasn’t your run of the mill’s thriller or gangster film and was in many ways one of those films that were ahead of its time. Being an ardent fan of directors like Guy Ritchie and Quentin Tarantino, the style and treatment of the film appeared all too well known for me and hence I was probably able to enjoy it a tad bit more than the rest of the Indian masses of whom a large chunk didn’t quite get what they were expecting. However, the film does take a rather over-treaded path in the end which might have found a lot of takers in the Indian audiences and left most of the movie goers with a smile on their faces but to me, that wasn’t a befitting end to a tale like this.

The story revolves around two twin brothers, Charlie and Guddu both played by a nearly flawless Shahid Kapoor. Charlie works for a trio of 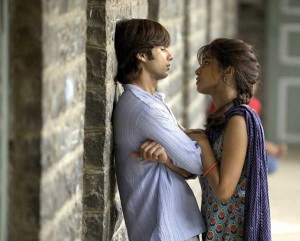 nefarious Bengali dons and dreams of becoming a bookie himself one day. His penchant for taking shortcuts leads him to boost a huge cache of drugs from the Anti-Narcotic Squad of Mumbai police that brings down the heat of some of the biggest drug dealers of the country on him including the police who are working as the courier of the drug lords. His brother Guddu is entangled in an affair with Sweety (Priyanka Chopra), the sister of a racist politician of Mumbai, Bhope (played superbly by Amol Gupte). Guddu hailing from Uttar Pradesh and marrying Sweety poses a huge threat to the politician’s racially charged image. Nevertheless he is literally forced by Sweety to marry her when he learns that Sweety is pregnant with his child. Bhope, who has already fixed Sweety’s alliance with a Mumbai biggie, is now forced to track down the eloped couple and kill Guddu to get back his sister and have his way. 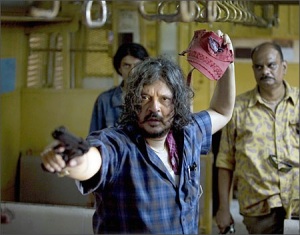 The first half of Kaminey is blistering. It is fast paced, it is darkly funny and it is relentless. The voiceover by Shahid was superb. Both the brothers have a specific issue with their voice. While Guddu stammers, Charlie is a lisp who pronounces “sa” as “fa”. This results in some hilarious pronunciations which you have to see and hear to enjoy fully. No words can actually explain the humor that these sequences embody. The scene where Guddu learns of Sweety’s true identity and that she is related to Bhope, who will not stop at killing him, will have you in splits. I couldn’t help but roll over with laughter. Guddu changes from a stone-hearted lover, who was not going to marry or help in an abortion of the baby, to someone who was extremely sweet and fluffy within moments. The scene that is an intro to the three Bengali dons is also very well done.

The second half is no less. While the speed and the surprises keep pouring in from all direction, the second half has more situational comic histrionics from two 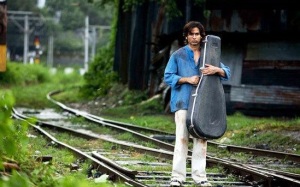 more hilarious characters. The two Anti-Narcotic cops played by Shiv Kumar Subramaniam and Hrishikesh Joshi are superb. The scene where Charlie and Guddu are exchanged on the train, the interrogation scene of Guddu and the scene where the cops are held by the drug lords to get back the stash are immensely enjoyable. It is really hard to poke a finger at any of the sequences as they are so well envisioned and so naturally acted. However, the climax of the film posed to be the only stickler in an otherwise immaculate dish for me. While it is crazy in many ways and is at par with whatever we had seen so far, it does end in a manner that was aimed at keeping one and all happy. I was really looking forward to something out of the ordinary from a film that had proved to be special in every sense of the term. But Bharadwaj takes a safer route and that makes the climax the only lingering issue in an otherwise flawless film. 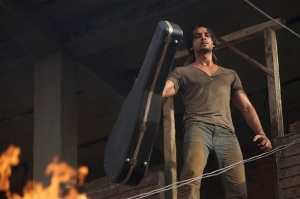 Kaminey is probably one of the best Shahid Kapoor films. There is something special about Shahid Kapoor and Vishal Bharadwaj teaming up which brings out the best in Shahid Kapoor. His next best act came in a film called Haider which I believe till date remains his best performance on the silver screen. Kaminey is no less. Priyanka Chopra is ravishing. I just loved her act. Playing a very de-glam character that isn’t easy to play in Bollywood, she still looks smoldering and glitters whenever she is on screen. Amol Gupte as the crazy racist politician is super. He is darkly funny and very natural.

Easily, Kaminey is one of the best films of Vishal Bharadwaj. It has everything going in its favor. The superb performances, the quirky story and an abundance of dark humor make this film one of the rare “Hatke” films of Bollywood. If you haven’t seen it already, you must watch it as soon as possible.