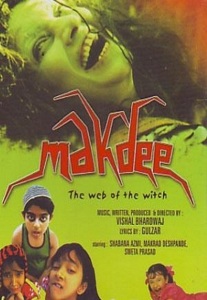 Makdee was Vishal Bharadwaj’s directorial debut. Before that, he was primarily a composer whose soulful music had found takers among the Indian masses. He also won numerous national awards for his music. My fondest memories of his music were that of two songs. “Pani pani re” from Maachis and “Chai Chap Chai” from Hu Tu Tu. When you look at Makdee, you can easily see his inclination for his music putting in songs at several places where he could have easily done away with. However what works in his favor is the fact that almost all the songs are likable and soothing to the ears. He has a track dedicated to the witch. He even has a track dedicated to “Kallu Kasai”, the village butcher played by Makrand Deshpande. They play out well as quirky assemblages of lovable melodies.

Makdee is the story of twin sisters Chunni and Munni both played superbly by Shweta Prasad. 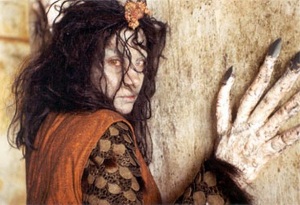 While Munni is an innocent and loveable girl who does everything by the books, Chunni is rebellious, lies a lot and often takes advantage of her twin sister. In the village that she lives, there is a large mansion that is rumored to be haunted by a witch known as Makdee. People don’t go near it and it is also rumored that anyone who goes into the house is converted into an animal by the witch. As fate would have it, Munni accidentally ends up in the house for a reason that has Chunni at the helm and is converted into a hen by the witch. Chunni must now obey the witch’s order and perform the impossible tasks asked of her to bring her sister back.

Makdee is an endearing film. It’s primarily a children’s film but it has enough to keep even the adults interested. It’s a classic example of the story of the girl who cried wolf. Here a similar predicament happens with Chunni who is known by one and all to be a trickster and hence no one believes her when she asks for their help to save her sister. The story introduces us to her histrionics early on. We are also shown how self-sure and confident she is which really sends a shiver down our spine when we see her all vulnerable and in pain. After Munni is converted to a hen, there are a few nerve-wracking sequences where we get the feeling that she might meet a swift end. These sequences are tense and they are further elevated by the superb act of Shweta Prasad who is tremendous in this film.

As the film progresses, it gradually metamorphs into a potent drama. The story acquires

seriousness after the tragedy strikes and we inch closer to a thrilling finale. The existence of the witch is very well realized. Shabana Azmi plays Makdee to perfection. She is not only scary but very believable. It wouldn’t be wrong to say that she is scary because she is believable. The rest of the cast members do their part well. Makrand Deshpande is the most noticeable. His Kallu Kasai is part funny and part scary. You hate him at many sequences but also love him in some of the others. Aalap Mazgaonkar plays Chunni’s only friend, Mughal-e-Azam. He is natural and never for an instant drops his guard in the presence of the sublime Shweta Prasad. he matches her scene for scene.

Makdee is an enjoyable affair that doesn’t need you to be a kid to enjoy fully. This was a very good debut fro Vishal Bharadwaj who went on to make some of Indian Cinema’s finest films. Watch this one for sure if you haven’t already.