Badrinath Ki Dulhania turned out to be a surprisingly entertaining watch. At least that was the case for me in the first half, where Varun Dhawan proved once again that he may be a star child but he surely is a talented star child. The fact that the film hits on important social issues only adds to its charisma in the first half. The story is that of Badrinath Bansal aka Badri who meets Vaidehi (Alia Bhatt) at a party and falls head over heels in love with her. However, both hold extremely polarizing views about gender biases and Badri’s father is a mean cuss who has had his way with his children all his life. Especially in matters of marriage. Badri must now find a way to woo the girl first and then ensure that his father approves of his union.He succeeds in both but on the day of the wedding, Vaidehi runs away leaving a shattered Badri and a fuming Badri’s father gasping for revenge,

Years before, I heard a guy tell a girl that when he was wooing her, he was in seventh heaven

and this he realized when she finally gave in to him and they got into a relation. It was then that he realized that chasing was more fun. This is exactly the story of Badrinath Ki Dulhania. The film is a laugh riot and extremely adorable through the first half. The first half that comprises mostly of the guy wooing the girl, Varun is absolutely brilliant. The manner in which, Alia’s Vaidehi floors him, again and again, owing to his lack of overall knowledge and for the fact that she is more educated than him is heartening to watch. He is not ashamed of crying and that just catapults our love for him. We look at Vaidehi as the mean cuss but that’s because of the fact that Varun is so damn cute and not so much because of what she does to him. Their altercations and the gags emanating out of it keep the film rolling in the first half. 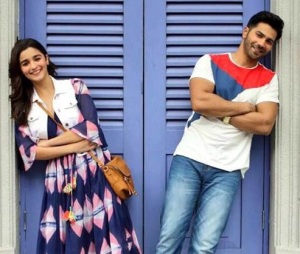 However, the second half sees the film screech to a halt. I had a feeling that I was watching a totally different film in the second half. I tried to reconnect with Badri but he was not as much fun as he was playing the lovable brat. Now he had turned into something that was a product of what Vaidehi had done to him and I was not liking him anymore. There are a few flashes of brilliance here and there but they are limited and far apart. The songs keep rolling here and there and they further strangle the speed of the narrative. The film no longer is the breezy tale that I had fallen in love with in the first half and that’s when I realized that the second half jinx of Bollywood had struck again.

Alia Bhatt is confident, peppy and feisty in this film but Dhawan’s super act just overshadows

her good work. Her character felt like an extension of the character she played in Dear Zindagi. That’s not necessarily a bad thing but for me, it wasn’t a good thing either. I just loved Sahil Vaid as Badri’s friend Somdev. He is hilarious. His comic timing is so good that you cannot help but fall in love with his character. The second half of the film also brings in a lot of social commentries which doesn’t necessarily turn out to be interesting or engrossing. I liked the film much more when it was the hopeless love story of a brat who thought himself to be the best groom in the world.

Having said all that, Bardinath Ki Dulhania is still a very watchable film. It may be a recantation of Humpty Sharma Ki Dulhania in many ways but I found it much more entertaining especially in the first half. If you haven’t seen this film till now, you can definitely give it a watch. You will be entertained.