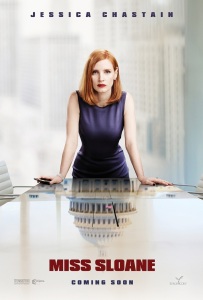 Miss Sloane is an exciting affair. I have observed over the years that Hollywood is particularly good at making films about conspiracy, business, betrayal in business and lobbying. The last film about lobbying that I thoroughly enjoyed was Ides Of March which was about a presidential campaign run of a governor aided by two campaign managers who go on to shape the presidency of the governor. It was a tense and thrilling affair that was marked by superb performances from the entire cast and a stirring portrayal by Ryan Gosling. Miss Sloane has a similar vibe even though the stakes are much lower here. Still for Miss. Sloane, it’s a make or break affair for her career and also the same is applicable for gun running.

Miss Elizabeth Sloane (Jessica Chastain) is a high-profile lobbyist who is in love with what she does. However difficult it may be to accept, Sloane is a

sort of an idealist. She picks her fights. And once she is done choosing her fight she can stoop down to any level to get her job done. She is also willing to rise to any level to get her job done. In her latest fight, Sloane is pitted against the gun lobby. An act is being passed that will regulate gun licensing and will make it difficult to acquire a licensed gun but not beyond a reasonable requirement. The gun lobby believes that the newly enforced regulations will make it more difficult to acquire guns and hence will affect their business. Thus begins their epic showdown with Sloane who is going all out to get the required number of votes from senators to pass the bill.

Miss Sloane is superbly entertaining. The film is filled with almost non-stop dialogs and surprisingly it is laid out so well and so lucidly explained that even the most inane of viewers will understand very nook and corner of the film. The tale has a classic three act structure wherein in the first act, the principal players are introduced, and the basic McGuffin is set up. Following that, the story swirls around the process of getting the necessary votes and how best that can be achieved which serves as the buildup for the finale. The final climax shows us to what extent Sloane is willing to go to get the job done. We are given a sneak peeks into her attitude here and there but the finale is worth the wait which almost completely got me by surprise.

Jessica Chastain is wonderful. She is an extremely bankable actress and here she is not only sublime in her act also very alluring. There is something so very likable about her

character that you are bound to enjoy her act even though she plays and character that is from time to time not all that good. If you look closely, you are bound to see certain nuances in her act that will make more sense if you re-watch the film. There seems to be a certain disconnect between her and the world that she is a part off and that is very well explained in the third act of the film. Mark Strong gives her good company. He is another extremely likable actor and this role does nothing to harm his mojo. John Lithgow as the congressman Ron M. Sperling is great too. I loved the way he approaches the role and the note in which the story ends for him. Gugu Mbatha-Raw as a successful lobbyist herself who is played around by Sloane is wonderful. She is especially good in the sequences where her past is used for mileage by Sloane. Her eyes speak volumes.

Technically speaking, Miss Sloane leaves nothing to be desired more. It is beautifully shot, edited and scored. The dialogs even though incessant are laid out and essayed in a manner that helps you understand exactly what is happening. The film keeps you interested all the way through and gives you some necessary and well-planned jolts here and there which will be enjoyed by one and all. It is beautifully acted and has a runtime that will not weigh in on your senses or make you feel exasperated. If one has to put a finger on the negatives, it must be said that the film does drift away from reality in showing the herculean strength of its protagonist which doesn’t always go in its favor. She is almost a superhero. The climax too proves to be just a tad bit too much to fathom.

Having said all that, I still had a great time watching this film a couple times and I don’t think I will mind watching it a few more times. It’s one of those films that is as entertaining as a summer popcorn flick but also has a heavy plot and a truckload of jargons to deal with. I believe by now, you must have got an idea of what to expect from this film. If it’s your cup of tea then you may as well watch this film. You will not regret it.