The Pirates of the Caribbean series is special for me. I almost grew up with this series and it has never ceased to entertain me. While many have sighted the later films of the series to be the ones taking the series downhill, I personally never had any major problems with the series. The audiences and the critics really took apart the previous installment of the series but I didn’t find it that bad. So when this film was announced the reactions were mixed. I was, however, pumped as a Pirates of The Caribbean film has been anything but “not entertaining” for me. This film even had Javier Bardem, one of my favorite bad guys of recent times and that just rocketed my excitement for the film. The film released well over two weeks ago but I just couldn’t muster up the time to watch this film and now having finally watched this film, I can say that I am pleasantly entertained but somewhat disappointed with the end result.

The film starts off with a young Henry Turner (Will Turner’s son) reaching for the Flying Dutchman and meeting his father, Will. He swears to release his father from 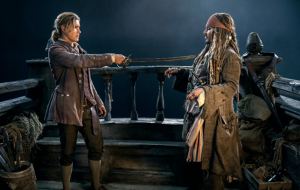 the Dutchman’s curse by unleashing the “Trident of Poseidon”. Years later he finds himself searching for Jack Sparrow who he needs to get to the Poseidon. During his voyage with the East India Company, he comes face to face with the undead captain Salazar, an undead captain who is also looking for Jack. And then there is Carina (Kaya Scodelario), a smart girl who herself is on the verge of discovering the “Trident of Poseidon” using a diary left behind by her father. She is believed to be a Witch and is facing execution. She teams up with Henry after she learns of his miraculous escape from the East India Company ship that was ravaged by the undead Salazar. They soon find Jack and the three now set out on a whirlwind adventure to get to the “Trident” each having with their own personal agenda.

Starting with the positives, the film has great special effects. Be it the epic battle sequences, the undead Salazar and his army or even the de-aging of Jack Sparrow, there isn’t a single sequence laden with vfx that feels awkward. The film is also beautifully colored where even the darkly lit sequences are immersive to look at. The undead and their rendering is fearsome. Salazar is a digital wonder. The manner in which his hair dramatically flows is enchanting to look at. However one look at his face and you know what a demon he is. The character is part Bardem and part the wonderful visual effects. I, however, have a problem with this character that I will arrive at soon. This film also has prolonged and exciting action sequences which I believed forced the director to cut short the exposition heavy parts which really helps to keep the narrative flowing without any bumps.

Johnny Depp is charismatic as ever as Jack Sparrow. He is funny and he is interested in the part that he plays. His charisma and his physicality takes the film up a few notches easily. Kaya Scodelario was great too. She is not only a pretty face but a very effective foil to an otherwise completely male dominated cast. She looks the part and acts it out like she cares. That is more than what we could have asked from her. Brenton Thwaites is apt as Henry Turner even though his character is written poorly. He has absolutely nothing to do apart from being the anchor that brings the trio together. The intensity that he needed to have to express his feelings of not being able to be with his father are lost somewhere in the middle of the mockery that he is made to do.

The biggest complaint of it all for me was from the fact that why did they have to make Javier Bardem such a vfx laden character. Why on earth did they have to bloat the face and eyes of a man 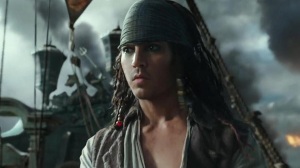 who literally sent shivers through those two things in at-least two of his previous roles in “No Country For Old Man” and “Skyfall” with vfx? They could have thought of some way to make him appear as he is and let him emote. Let him scare us through his acting. Let him do his thing. But no. While they did the same to Bill Nighy when he played the marauding Davy Jones but that was a better envisioned character. In case of Salazar, all of Bardem’s charisma and charm gets lost beneath a layer of highly impressive CGI and he becomes a routine bad guy when we could have had a lot more from the man. We know what he is capable off.

The film shows absolutely no urgency. The good guys will win. We know that. But at-least they could have made the screenplay a tad bit scarier for us to have our hearts in our mouth till the time the credits started rolling. That was the case for me with the first two installments at-least of the series. Even the third part was not easy to ignore. That, however, is not the case here. Here the director uses breathtaking action and breakneck speed to keep you engrossed and to drive your attention away from want of drama or for that matter logic. Did I just say logic? Yes! I was looking for a tad bit of logic that must be there to make up any fantasy. Without that glimmer of believability the story doesn’t appeal to the heart. This film lacks that logic.

Overall, Pirates of the Caribbean: Dead Men Tell No Tales is a perfectly watchable entertainer that doesn’t match up to the exploits of its predecessors. It may be better than the fourth installment but it still could have been a whole lot better. Johnny Depp and the sensational visuals and action are the primary reasons for you to watch this film if you at all do so.