The Belko Experiment is written by James Gunn, the man who brought us the incredible Guardians of the Galaxy series and is directed by Greg McLean of whom I knew very little. I haven’t seen any of his previous films but heard some very negative words about some of them. But I was still excited for this film as I believe that a film is only as good as the story that it has to tell and coming from James Gunn, at least the story could be expected to be good. The Belko Experiment is a film about 80 American employees employed under Belko in the city of Bogota, Columbia. In a bizarre social experiment, the Americans are imprisoned in their secluded high-rise office and ordered to kill each other off if they wished to survive the day. The orders come from an unknown voice on the company intercom. What happens next is what “The Belko Experiment” is about.

We have seen many films with similar content in the past and to make any impact this film had to offer something different and astounding. The story starts slowly as we

are introduced to the various players and given an idea about them. As we move through the motions, the voice suddenly breaks out triggering the beginning of the murdering rage. Post that the film swings between a slasher flick and survival horror as not only the company but the employees themselves start cleaning up one another with a certain amount of ease that will definitely horrify the audience. In a film like this, it is imperative to have certain characters who would stand out apart from the hero and the heroine off course. Well, that part is taken care off here by John C. McGinley and Tony Goldwyn.

They both have a very different manner of approaching the same target and achieving the same result. While McGinley is coarse, beastly and physical, there is an uber charm about Goldwyn who even at his horrific worst doesn’t lose his cool and composed demeanor. There is a scene where he calmly separates the employees into different groups based on who is more expendable and then goes on to execute them. This scene is made scary simply by the way it is approached and performed by Goldwyn and the others. Once the film reaches a point where the employees have to just kill each other off mercilessly it turns into a total blood bath and a slasher flick. This is where I felt the film went downhill as it took a simple tried and tested path that we have seen a million times. This was the part where they needed to inculcate some freshness or for that matter, some twists and turns but that didn’t happen.

John Gallagher Jr. was lukewarm. There was no intensity to his performance that was an absolute must to make his character work. While he did a great job in films like Hush and 10 Cloverfield

Lane, he seemed like almost sleep walking through his role. He comes into his own towards the end of the film but by then we have lost interest in his character. Adria Arjona is better. When looking at her character you feel the tension and the horrifying experience that they have been going through. Her expressions are very real and they make the sequences she appears in worthwhile. Michael Rooker, the guy who played Yondu in the Guardians of the Galaxy has a shortish role here but his end is the most shocking and well-done slasher scene in the whole film even though it is not exactly a slasher scene. Sean Gunn makes an appearance as the over the top employee Marty who really gets a raw deal. He is likable and interesting. 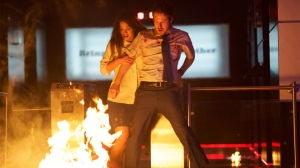 Having said all that, The Belko Experiment fails were it should have scored. It lacks originality. It lacks thrills and it lacks a shock value that is a must for a film like this. It is a straightforward tale with nothing really to look forward to. Apart from some of the characters, the rest of the cast just make a move through the motions without extracting any real emotions. The final reveal is also a big ho! ho! as you learn nothing about the people who are actually running the experiment and why they are doing it in the first place. There is zero explanation given for the whole plot but they do make a point to set up a sequel. However, the film does get a few brownie points for a few shocking sequences that stay with you for a while. This is a film that you may watch if you have nothing else to or you may just skip it. Either way, it would yield the same result.