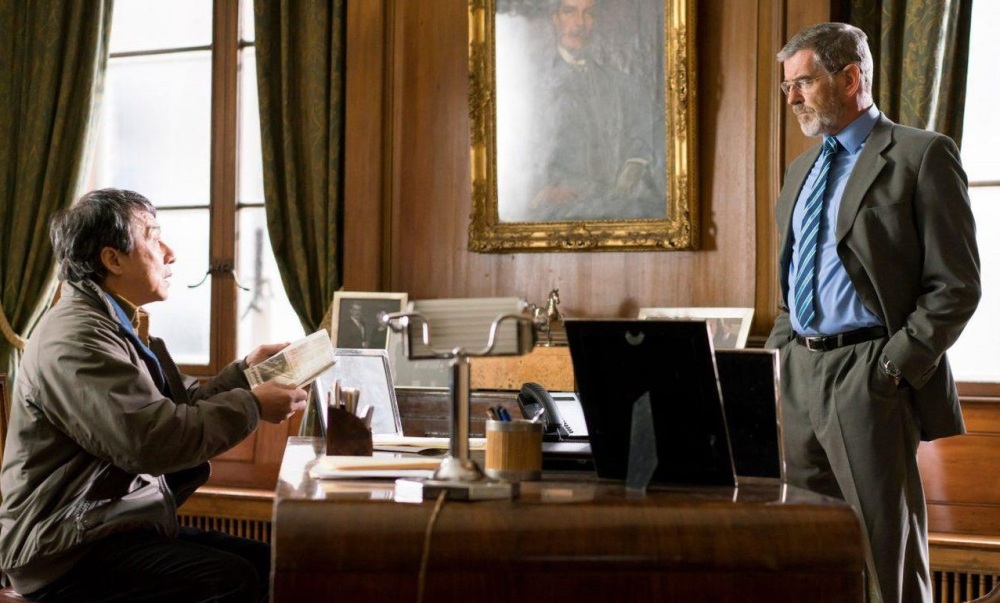 “The Foreigner” starring Jackie Chan in the titular role is a far cry from his comic action films that made him so popular. I was a huge Jackie Chan fan as a kid when I literally watched nothing else other than martial arts films of Chan, Jet Li, and Donnie Yen. However, over the years his charisma has somewhat diminished for me primarily because of the change in my taste. “The Foreigner” is a film that has finally brought me a version of Jackie Chan that I want to see in the future. That grizzled and scarred persona of a man who has lost it all suited him to a ‘t’ and made this film not only entertaining but also affecting.

Chan plays a Chinese Special Forces veteran who lost two young daughters to pirate atrocities. He later lost his wife in childbirth and the surviving daughter, Fan, is the last family that he has. When Fan is blown off in a terrorist bomb attack in England, Chan goes all out to find the men responsible for the attack and then put an end to them. Pierce Brosnan, on the other hand, is a retired Irish terrorist leader who has risen through the ranks to become an important minister in Ireland. He is entrusted by the Britons to find out who the bombers were. He may also have more to do with the blasts then just know some people around. The rest of the film is about what happens when Chan guns for Brosnan to give him the names of the terrorist.

I loved this film. Everything about it just clicked. I couldn’t help but notice that this film was directed by Martin Campbell, the same man who revitalized the Bond franchise atleast twice with Goldeneye and then Casino Royale. With this film, he proves that you don’t need a whole lot of action or comedy to make Jackie Chan appealing. There are just a few action sequences here which are, by the way, very well done. Most of this film is more about uncovering a mystery than it is about the protagonist going bang bang! The director uses some deft touches to make the character of Chan so affecting that you want him to get retribution. In just a couple of scenes, you understand his deep love for his daughter and what it means for him to lose her. Thus the retribution and everything else he does in follow-up to that becomes that much intriguing.

There is a brief sequence after the first blast blast when a photojournalist is shown clicking images of the victims and it is through his viewfinder that we see a brief glimpse of Chan holding his dead daughter in his arms and crying. The Journalist doesn’t click the image and through this action, a lot is conveyed to the audiences. There are many sequences of similar subtle depth peppered all around the narrative which I will not spoil in this review. This isn’t an action film but the fights are organic and brutal. Every action sequence unfolds as a result of a prolonged buildup. The director prepares you for what is about to come and when it does, its worthy of the wait. Chan still has the moves and he looks absolutely in sync with the action.

“The Foreigner” is a performance-driven film as in spite of having a deliciously intriguing plot, the film flows through the performances. Pierce Brosnan plays a grey character with considerable ease and charm. I loved the way he interpreted the many shades of his character and how well he carried out each one of them. I just had a little issue with his on and off Irish accent but other than that his act was spot on. Jackie Chan turned over a new leaf with this film. Earlier this year, we had his “Kung Fu Yoga” which was nothing more than an effort to grab some cash using his international pull. This, on the other hand, is the kind of film that will open up people’s eyes towards a world of casting opportunity for the man. He acts his heart out and becomes the tortured father that he is playing.

“The Foreigner” is also a film that is well shot and well scored. Martin Campbell is a very visual director and his biggest hits are also some of the most well-shot films. Just check out the initial sequence of Goldeneye to understand what I mean. In this film, he puts the viewer in the thick of the action using the varied camera angles, lenses, and perspectives. The background score of the film is not a mere frill but adds a lot to the manner in which the mood and the setting plays.

Overall, The Foreigner is one of the best action films of the year which will easily classify as a well-done drama and even a thriller. I loved everything about this film but nothing more than a grizzled and scarred Jackie Chan who huffs and Puffs and is not perfect in his execution of men but gets the job done never the less. The film has a somber tone all throughout but leaves you with a good taste in the mouth in the end. If you are looking for an action film with a difference, “The Foreigner” should be a must watch for you.