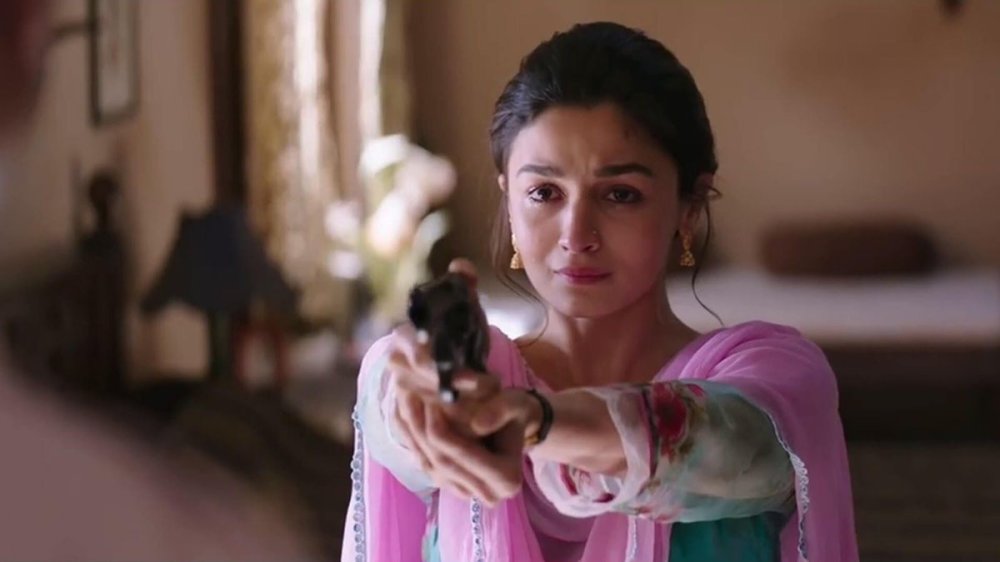 The first time you see Sehmat (Alia Bhatt) in Raazi is when she is seen saving a squirrel from an oncoming scooter in her college, getting hurt herself in the process. It’s almost ironically tragic that a girl who values the life of a squirrel more than her own safety will have to murder people around her in the course of a mission that her father literally hands down to her as a legacy of their family. I believe Meghna Gulzar gave us this little sequence just to give us a peek into the humanity of Sehmat which will be brought under clout again and again in the course of her mission. It is this conflict between what should be done and what shouldn’t be when you have to take a life for the success of your mission that lies at the core of the dramatic punch of Raazi.

Sehmat, a routine college girl is recruited into the intelligence agency when her ailing father just doesn’t have enough days left to get the info of a Pakistani mission against India during the tumultuous times of the 1971 Bangladesh war. Sehmat is married off to Iqbal (Vicky Kaushal), an extremely warm and caring Pakistani Major who also happens to the son of Maj. Gen Sayed who is the intelligence agency’s primary target for information. Once in Pakistan, she not only has to defend her secrets but also save herself from developing true feelings for the Sayed household who warmly accept her into their folds. Soon things spiral out of control and Sehmat finds it increasingly difficult to not only save her cover but also to maintain her emotional stability after doing what she is forced to do.

Raazi is a tense and engrossing film that derives its tension as much from the espionage elements as it does from Sehmat’s inner conflicts and dilemmas. One thing that this film does superbly is keeping a level head. There is practically no Pak-bashing. In fact, the film mostly unfolds in Pakistan and yet never for once, the director tries to bring in the tropes that are generally essential ingredients in an Indian spy thriller (Hero: the love story of a spy). On the contrary, this is a very subtle film that mostly stays on track and is absolutely believable.

Alia Bhatt is in sublime form here. Not only is she able to become Sehmat, she is also able to make us feel for the character by bringing in a heart-touching vulnerability to the part. The best parts of her act are the ones where she is forced to take lives and then is left to endure the aftermath. Some critics have sighted that she might have overdone these part but I strongly felt that her act in these parts was perfectly balanced. Different people would have reacted in different manners under these situations in a real-life scenario. The manner in which she acts in these sequences is her interpretation of the part. Her sequences with Vicky Kaushal’s Iqbal ooze with warmth. They seem to be the ones who are perfectly compatible when they listen to music together or the manner in which she hands him his things when he is leaving on duty. These sequences show that Sehmat is actually falling for his sweet and caring husband. This in turns makes the drama real and shattering when she has to face off against the same man who she has willingly given herself to. I loved the part where she has to console the wife of one character that she has, in fact, killed herself a while ago. This is one of Alia’s best acts since Imtiaz Ali’s Highway.

Jaideep Ahlawat is legendary. This is a role that is tailor-made for him and he makes the most of it. He carries one expression throughout the film and that he does because that’s how he has to be. However, every once in a while you get a window into his psyche through a subtle expression here and there that adds so much more to his performance. The last sequence that he shares with Alia’s character is particularly terrific. Even the simpler sequences with Rajit Kapoor (plying Sehmat’s father) are sublime. Vicky Kaushal is great too. His character is unlike any Pakistani Major that you will see in any Indian film. He is soft, he is caring and he is totally devoid of any jingoism. He loves jazz and doesn’t force himself on his Indian wife. What’s more, he doesn’t even word-bash India. Kaushal is still able to bring some true credibility and believability to his character that is a far cry from what we have come to see and expect from Bollywood interpretation of Pakistan Army Personnel.

Shishir Sharma’s Maj. Gen Syed is also unlike any Pakistani General that we have seen before. He loves his daughter in law. He is quite good at what he does but he does it all in the most clinical way possible. Never for once does he give into any amateurish trope that typecast Pakistani Generals who are shown almost always planning “Hindustan ki Barbadi” and that is precisely why when he breaks up in the end, it is so effective. Arif Zakaria is brilliant in a role that sent shivers down my spine in the most unlikely ways. He knew who Sehmat was from the very beginning and I could see it in his eyes. This is what made me scared that he would be onto her in a matter of time. He is. Zakaria is a picture of confidence and subtlety in a role that could have easily gone out of hand.

Raazi is an extremely well-directed film that is taut, tense and above all aims for the heart and hits the bull’s eye. The fact that it is based on the exploits of real spy, only makes it that much more intriguing and exciting. Terrific performances from Alia, Ahlawat, and Kaushal — some intense, heart-stopping drama — and an interesting story are only some of the factors that make this film a must watch. The manner in which this film ends makes it in many ways a prequel to last year’s equally good The Ghazi Attack.