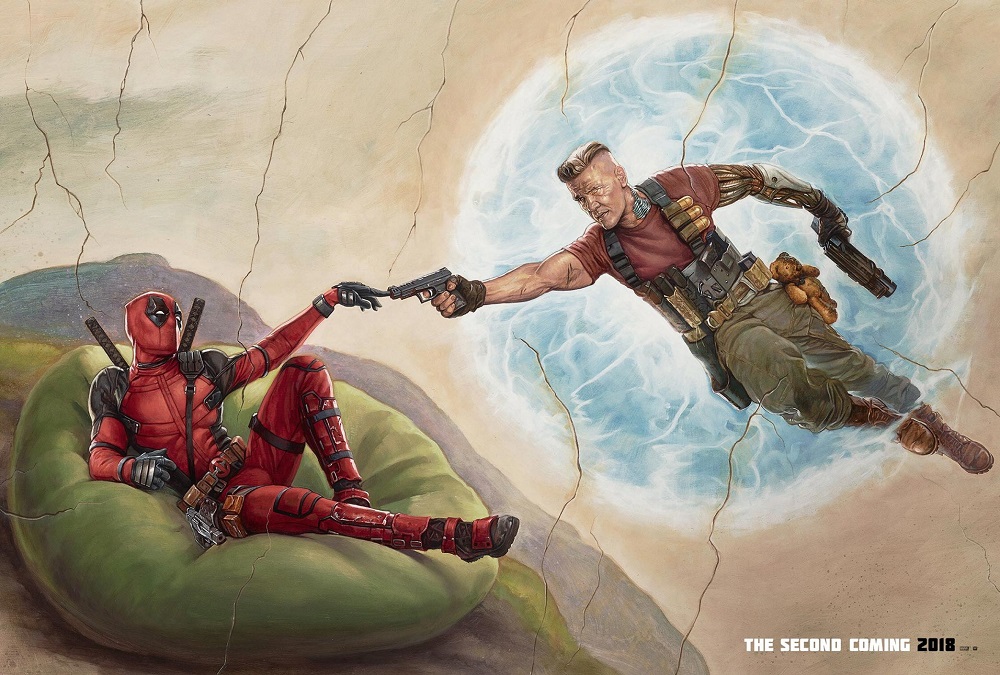 Deadpool 2 is the follow up to the 2016 smash that not only set up one of the most likeable and funny superheroes of the Marvel Universe but also proved that no battle is lost until there is atleast one man standing to fight for it (Ryan Reynolds in this case, who would just not let the film and the character die). Deadpool 2 has a bigger budget, more stars and an amped up feel to it. While many believed that the first film was such a big hit because it was self-aware, knew its limitations and remained within its limits, this was a film that was worth watching out for even though it showed signs of trying to be that “bigger and costlier” sequel that we are all so scared off.

Going by the bad history that “bigger and costlier” sequels have in Hollywood, I had my fingers crossed. We have a new director in David Leitch, whose work I loved in Atomic Blonde (2017, Charlize Theron). But the question still remained whether he would be able to maintain the same mood, feel and tempo that Tim Miller so wonderfully realized in the first film.

Deadpool (Reynolds) is cutting, chopping, and shooting his way through the world looking for best of the worst criminals that he can find until he faces the second biggest tragedy of his life (first being his “Avocado” look). He loses his way and contemplates suicide but is brought into the folds by the X-Men (in a hilarious scene) led by Colossus (voice of Stefan Kapicic). He soon crosses path with a kid, Russell (Julian Dennison) who has been targeted for assassination by a time-traveling mutant, Cable (Josh Brolin). Deadpool believes that saving the kid is his only chance at retribution and maybe finding some peace in this world. The rest of the film is one rollercoaster ride of comedy, thrills, and action.

Deadpool is in many ways more of everything that we loved about the first film. The comedy, the wisecrack, the name-calling, the situational comedy and of course the give and takes are all there. I had a grin on my face all the way through the film. What I really loved about the comedy was how bold Reynolds and the director were to be able to poke the most bizarre insults at previous Marvel films that we have loved to hate over the year. I was rolling on the floor when Deadpool calls, who is essentially the primary antagonist of the film, an online predator who has just lost his laptop. He references the Luke and Leia kiss from Star Wars, he calls Josh Brolin’s Cable Thanos. Even the hi! Yukio and bye! Yukio strangely feels like an insult as well. I really don’t know why.

Deadpool is Ryan Reynolds and he has practically lived the character for years and that has in many ways meshed him inseparably with the image. He has very few scenes without the costume but that never for once takes his face away from our memory. Even when he is in uniform, I somehow could picture, Reynolds’ face on the things that he is shown saying. His comic timing is so perfect that I don’t think there is anyone else who can pull it off this well. Just imagine him calling Negasonic Teenage Warhead (Brianna Hildebrand), Sabrina the Teenage Vampire and you will know exactly what I mean. Deadpool assembles a team of superheroes (if you may call them so) and the end that the team meets with results in one of the most hilarious sequences of the whole movie.

Josh Brolin as Cable doesn’t have much to do. In fact, no one else does. This is a Deadpool film and no one is ever going to complain about it as long as Deadpool is as good as he is here. Having said that, he still does well in a role that needed him just to be coarse and physical. He does have a moment or two towards the end. After Reynolds, my next favorite of the lot is Julian Dennison, the kid from “Hunt for the Wilder People”. This isn’t a film that would stretch his acting muscles but he has enough shine here to be noticed. Zazie Beetz is terrific. I believe she is the prettiest colored actress around and I loved watching her move through the film.  T. J Miller is back as Weasel and he is still infectiously fun and unreliable (for Deadpool). Loved his bit.

Deadpool 2 is definitely bigger and better in terms of action and visuals. A beloved Marvel Villain makes an appearance for the first time and interestingly enough he is rendered exactly as he is in the comics. The showdown between him and Colossus is terrific which also brings me to the point that Stefan Kapicic as the voice of Colossus is fun. The film has enough action to rank as a straight out action film. As it moves from one point to the other, each portion of the film culminates in an action set piece. Each of those set pieces is superbly executed. More than the climax, I loved the part where the X-Force or as it turns out atleast 2 of them take on Cable in a battle to save Russell.

Deadpool 2 is everything that a sequel to Deadpool should have been. It is bigger, it’s funnier and it is better made than the first installment. Also, the transition from one director to the other has been pretty smooth. I was expecting a feeling of jerks here and there owing to the difference of understanding of the material or for that matter a change in feel for the character or material. But that isn’t the case. Constantly I had a feeling that this film was directed by the same director as its previous installment primarily because of how consistent it felt with its predecessor. I believe that will be a major pull for the fans of the previous film. Deadpool 2 is awesome and a must watch for fans and first-timers alike.