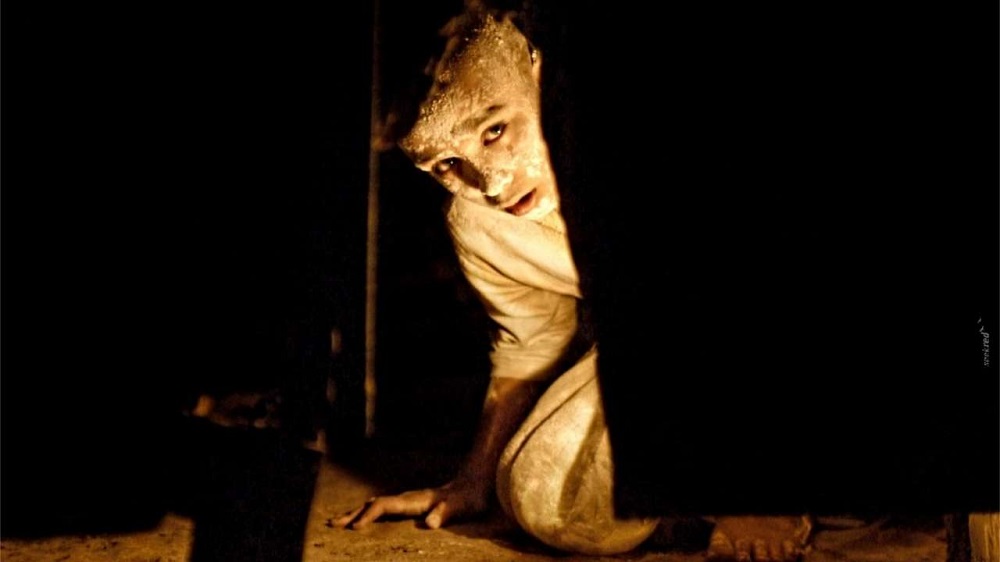 A mystical deity who is the creator and provider of the universe has a firstborn who is consumed by greed for riches and yields. He is Hastar. He robs his mother of all the riches but before he can get his hands on all the yields, the Gods descend upon him with fury. His mother saves him from complete annihilation and keeps him safe in her womb. But she has to agree to a condition from the Gods who want Hastar to be forgotten and no mention of him to be ever recorded in history. However, the people of Tumbbad do the unthinkable and build a temple in the name of Hastar. Vinayak (Sohum Shah) is the heir to the family that has not only lived with the curse of the Gods that came with building a temple for Hastar but also the secrets to a mystical treasure that never runs out.

As Sohum Shah (producer, lead actor) of the film mentioned in an interview, Tumbbad changes its color like a chameleon. It’s almost impossible to put it in one genre. This is a film that is a mishmash of fictitious mythology, horror and atmospheric thrills and even family drama. The film crawls under your skin from the get-go.

After the introduction to the mythology, we dive straightaway into the life of Vinayak as a kid. We see firsthand his inclination towards getting the treasure of Tumbbad and how hell-bent he is about it. He is not even shaken by a personal tragedy and a vicious attack that he survives. He pursues his mother who makes him promise never to come back to Tumbbad on their way out of the village. The thoughts and words that come out of this boy’s mouth are shocking and are bound to affect the viewers as they are not expecting something so laden with greed from a kid. Even when he promises his mother that he will never return to Tumbbad, we know from his voice modulations that he is definitely coming back.

In the next chapter, the story moves ahead in time and now we meet a grown-up Vinayak who arrives in Tumbbad for the treasure. The lengths that he goes to, to get his hands on the treasure are bound to send shivers down your spine. It has to be mentioned that these sequences are masterfully shot and edited. We are given only a tiny bit of the whole information. We see Vinayak get his hands on minuscule parts of the treasure at a time and keep wondering why he doesn’t get it all out at once. We get the answer to that question in the final act of the film and it is mighty impressive.

The final chapter of the film involves Vinayak and his physically challenged son who now work as a team to extract the treasure from Tumbbad. His son may be physically challenged but he goes beyond his limits to impress his father and more importantly, he himself is smitten by greed and once he understands what the treasure can do for him, he goes all out after it. He ends up paying a price much higher than what he had bargained for in the emotionally draining climax of the film.

Tumbbad is easily one of the most gorgeous looking films to have ever come out of Bollywood. Every sequence is drenched in visual wizardry. The film is nightmarish in its content and treatment but it looks so beautiful that I wouldn’t mind staying in this nightmare just to get my eyes full of the beauty. The DOP uses lighting intelligently to create some surrealistic visuals and shadows. A lot of the scares are created using this trick and it also contributes heavily to making many scenes aesthetically rewarding. The rain which works like a motif throughout the narrative is used as a character. It not only adds to the beauty of many scenes but also is effective in creating a somber mood all throughout the narrative. Tumbbad is not a happy film and doesn’t have too many lively sequences but that is probably one of its fortes as it suits the story and the mythology.

The film also boasts of some great visual effects. It’s true that the primary antagonist looks like the mummy from “Tintin and The Seven Crystal Balls” but that doesn’t take away anything from the well-envisioned and thoughtfully designed VFX. It is successfully able to gel special effects and real footage and characters and it is impossible to tell what is what. That to me is good VFX.

Sohum Shah is brilliant in a role that is tailor-made for him. We witness his character evolve through the ages and the only thing that remains common in his character is greed. He is a self-aware man and he accepts glee-fully that the only thing good about him is his greed. However, towards the end of the film, we get to see a different facet of his character that I wouldn’t spoil here. His character was in the risk of being too detached to be cared for in the film, but Sohum Shah’s charisma and his ability to strike the right balance in the nick of time ensure that his character remains affecting and effective.

Mohammad Samad was terrific in “Haraamkhor” but here he outshines his previous role. He isn’t there for too long a time but when he is on the screen you cannot take your eyes off him. I loved the sequence where he approaches his father’s keep and tries to seduce her. The lady will be thrice his age but the kind of confidence and foxy guile that he shows in her presence is wonderful to watch. His sequences with his father are also beautifully envisioned. He knows he has a lacking and yet he does his best to outrun that deficiency and prove to his father that he is worthy of his love, respect, and recognition. It’s easy to draw a parallel between him and his father as they have a common trait that goes beyond just defining them. It runs in their blood. Greed! Samad has an innocent face and it goes down a long way into making his actions that much more amusing as they don’t match up to his innocent exterior.

Harish Khanna has an important role to play and meets with the most gruesome of ends. His end is probably the most thrilling bits of the film and I watched it through a crack between my fingers. The effect of it would not have been the same had he not become a tad bit endearing. Khanna does a great job in rendering his character believable.

My only nitpicky issues with the film are that it felt a bit hurried in its culmination which also resulted in it in not being able to extract the last ounce of emotions left in the audience. The film also felt a bit jumpy at certain portions which I believe could have been easily taken care of. I learned that the film was almost 6 years in the making and spent nearly a year on the editing table. Hence the makers took their time with it. So such minor issues should have been easily dealt with.

Tumbbad is just like the scary stories that our grandparents told us when we refused to sleep as kids. “So ja warna Hastar ajayega” is a fall back on the similar lines that we might have heard from our grandparents numerous times. It is characterized by a bold and truly different story that hasn’t been seen in a Bollywood film before. It has scintillating visuals, top-notch thrills and absorbing performances that bring to life all your worst fears. At about 2 hours and 53 minutes, the film hits the right runtime. If Tumbbad works out at the box-office, it will open the gates for a flurry of similar films which I believe will be great for Bollywood. We need a lot more of such original stories. Our culture is a treasure trove of stories and its time that we access those resources. Tumbbad has led the way and it’s important that the others follow.