Now, this is what I call an edge-of-the-seat thriller. I first heard about Contratiempo when the first poster of the Hindi film Badla (Amitabh Bachchan, Tapsee Pannu, Sujoy Ghosh) was unveiled and while researching about it I came to realize that it was an official remake of this Spanish thriller. Also known as The Indivisible Guest, Contratiempo was lapped up by the audiences but received mixed reviews from the critics. I watched this film recently and was totally blown away by the amount of intrigue that this film is able to generate for its characters. The story revolves around a duo of Adrian Doria (Mario Casas) and Laura Videl (Barbara Lennie) who are having an extramarital affair. Both Adriana and Barbara want to stick to their respective spouse and hence want to keep their affair under the wraps.

As luck would have it, they meet with an accident while coming back from one of their escapades and the resulting chain of events leads to the death of Laura. Adrian gets implicated in the murder as he was in the same room and was knocked off by who he says was another man in the room. Adrian professes his innocence and uses his substantial financial clout to get himself free of all charges. When a crucial new witness is found who Adrian’s lawyer believes would be enough to implicate him, they decide to use the services of Virginia Goodman (Ana Wegener), a witness preparation expert who has never lost a case and who agrees to prepare Adrian with an impregnable defense statement within 180 minutes as that is all he has left between the newfound witness reaching the court and Adrian being arrested. Thus Adrian begins to tell his version of the story to Virginia who must now sieve through the truth and lies (if any) of Adrian and prepare him a defense that would be enough to get him off the hooks.

Contratiempo takes three perspectives on the same story and each of the takes is bound to make you question the other two. The intrigue of the film germinates from the amount of credibility that each of these takes on the same story has and it is what leaves the viewers bewildered and guessing until the film finally decides to reveal the truth about what actually happened to Laura. I was hooked to the narrative from the get-go. There isn’t a single sequence or scene that is wasted. The film mostly comprises of dense and fast dialogues and I was watching it using subtitles and yet it had a vice-like a grip on my sense. That goes on to tell how well executed the film is. It is just so well acted that it becomes difficult not to get involved with the characters and watch till the end where the story takes them.

Evidently, the majority of the film’s grip comes from its captivating performances. Mario Casas is commanding as the protagonist Adrian. He is the good guy in certain portions of the story and the bad guy in the other portions. Interestingly enough when he is good your heart goes out to him and you feel bad for the trauma that he has had to go through.  When he is bad you feel a sense of hatred for his character that is synonymous of the feel for the meanest and worst villains. He is so real in all the versions of the story that it becomes almost impossible to put your fingers on which part of him is for real and which are not. Barbara Lennie is stellar in her rendering of Laura. She plays extremely well off Casas and had it not been for the chemistry between the two, a lot of the drama would have been lost. There are scenes where not even dialogue is required to understand what is going on in their heads. Their chemistry is that good. Apart from that, Lennie’s own character has an interesting arc that is of a similar nature to Casas’. I just loved her character’s interaction with the victim’s family. That would easily be one of the most exciting scenes of the film. 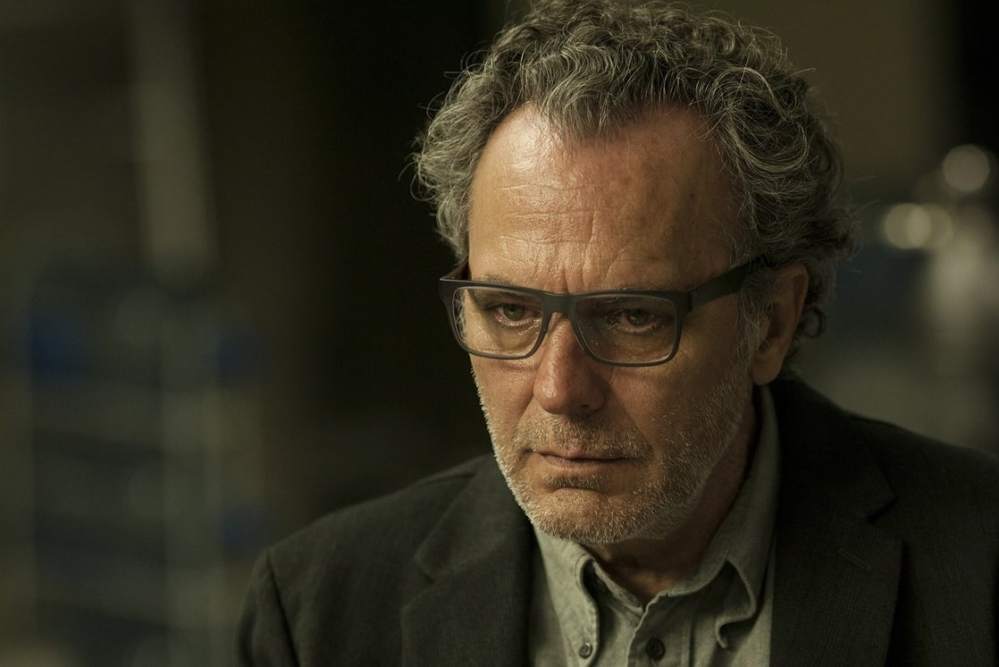 Anna Wagener as Virginia Goodman is sensational. There is a lot to her character that is revealed only in the end and it just goes on to add so much to her performance. She is domineering, she is commanding, and she is constantly in a spot of bother that one can make out from her expressions but cannot quite put a finger on the reason for the same. These factors contribute to making her character that much more interesting. Jose Coronado plays the father of the boy killed in the accident and he is just as good as the others. He has some of the toughest scenes to act out and he does an exceptional job with it all. Just like Casas and Lennie, his character has different shades to it in the different versions of the story that Adrian tells Goodman. He remains consistent and engaging in all these avatars and the viewer is again and again forced to question which version of the man he really is.

Contratiempo is the kind of thriller that can be watched again and again and still enjoyed at varied levels. The film has a somber mood to it and it is maintained not only in its content and performances but also in its visual style and color palate. There is a feeling of uneasiness all throughout the narrative and it really gets under your skin. It is a film that will truly surprise you and that in essence is one of the best characteristics that an effective thriller could possess. Intriguing story, investing performances, wonderful visual layout, and a nerve-wracking finale is what makes this film un-missable. Contratiempo may not release here in India but it is available on Netflix for your viewing pleasure.