Free Solo climbing or free soloing, is a form of rock climbing where the climber (free soloist) climbs alone and without using any ropes, harnesses or other protective equipment, relying entirely on their ability to climb. On June 3, 2017, Alex Honnold became the first person ever to Free Solo the El Capitan of the Yosemite National Park in 3 hours 56 minutes. The ones before him took days to complete the feat with ropes and protective gears. Free Solo is the story of Alex Honnold’s “unheard of before” feat and the team that chose to film it.

Free Solo is a monumental feat both in terms of storytelling and technical achievements. The story starts off with us getting a peek into the life and exploits of Alex and then even before we realize it, we are taken deep inside his psyche, his awkward equations with people around him, his inability to behave and act like normal people would under certain circumstances, his unique and sometimes hurtful ways and above all, his interesting relationship and dynamics with his girlfriend Sanni McCandless who is madly in love with Alex but time and again fails to understand what drives his life. 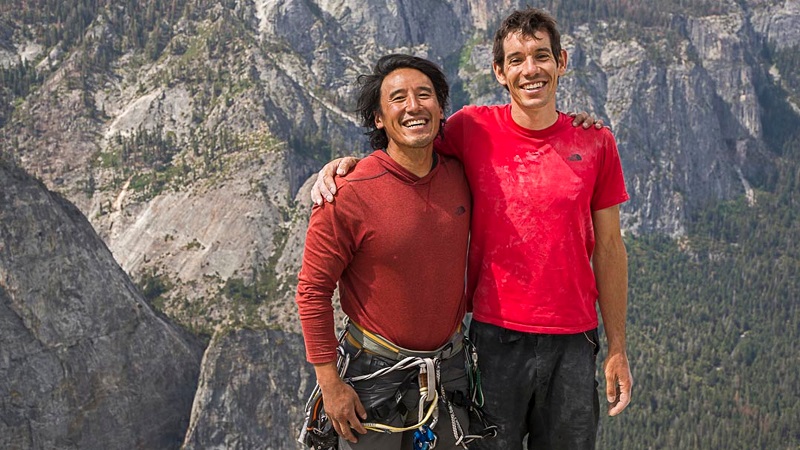 A few minutes into the documentary and anyone would realize that Alex is not the regular guy and this you realize not because of the extraordinary feats that he is shown achieving but because of his weird ways around people and interactions. When asked about his girlfriend, the man says that she livens up the place, doesn’t take up too much space and makes life and his existence a lot better in every way. It is extremely easy for anyone to take offense from these words but that’s the closest he can come to saying that she completes him. The documentary, without showing Alex professing his love for Sanni, shows us enough to make us realize what position she holds in his life and that for me was beautifully done and enormously rewarding. Not only is Alex an exceptional athlete, he is an extremely mysterious man on whom one can make a documentary without even including the climbs. This factor plays to the advantage of the film as we are hooked from the get-go to his character and which way his life is headed.

As we are so invested in Alex, every time he takes a Free Solo we have our hearts in our mouths. The film successfully dwells into the preparations and the little nuggets of information that most would ignore as it shows us how Alex meticulously plans and executes his climbs. He maintains a journal for his climbs and literally writes down every movement of his hands and feet across the crevices, curves, and elevations as he prepares to go solo. It is a sight like no other when we see him actually replicate the moves on the surface with him voicing the moves from the background. It isn’t easy for a film to bring to the table the kind of excitement that this film is able to. We all know too well that Alex successfully made the climb but there are moments in the film when I had to look away from the screen. There is something referred to as the “Boulder Problem”. The manner in which Alex deals with this problem is one of the most thrilling bits of adventure ever captured on film. One can see this film just for this little sequence. It’s also interesting to note that the makers consciously build up the narrative in a manner so as to use this portion as a climactic moment in the same line we have a “boss fight” in a superhero film. 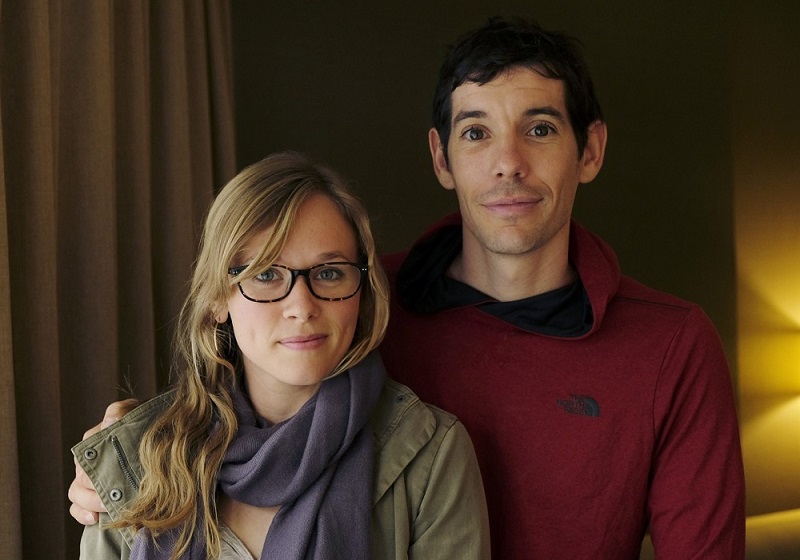 I am a huge Jimmy Chin fan. I have never been a fanboy for anyone but when it comes to him I am as close to being a fanboy as I ever have been and that is for some pretty strong reasons. What Jimmy does for a living is in itself awe-inspiring. I had an opportunity to watch his Masterclass on Adventure Photography and the class made a few things abundantly clear for me. Jimmy is a terrific climber. He is a thinking man who is in unison with his gear and craft. He is technically just as proficient as he is imaginative. All these factors about him are found in evidence in this film. Free Solo is easily one of the most breathtakingly shot films ever. This is one for the IMAX experience. Just to understand what these men had to go through just to get certain shots, let alone work with imagination, is mind-numbing.

Jimmy and his crew literally had to make the whole climb with Alex albeit with ropes and safety gears. But the comfort of having protection was belittled by two things. The weight of the gear that they had to carry up, install and use also keeping in mind never to get in the way of the climber or play on his psyche. The second and the most sickening load was of the thought of having to see their friend fall to his death through the frames. These two aspects of the problem are brought refreshingly to life through brief interactions, facial expressions and pep talks between Jimmy and his team. These portions are subtle but make you feel the same tension and anxiety that the team is experiencing at that juncture. I felt as happy as Jimmy must have when Alex made it to the top and that speaks a lot about what the crew was able to achieve in terms of human drama. 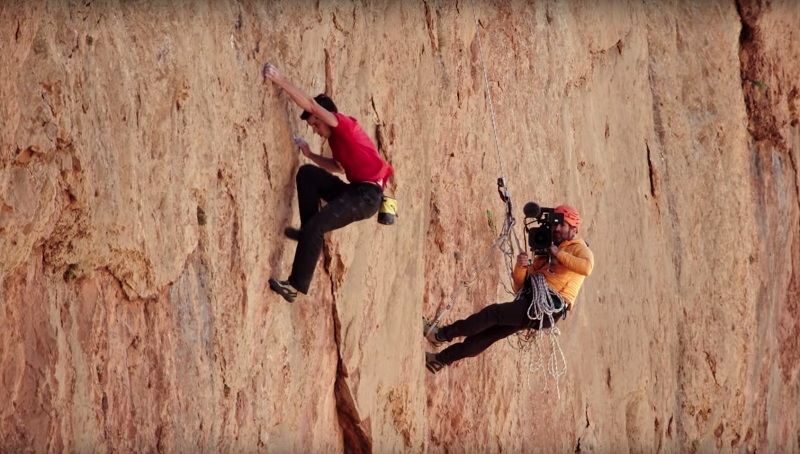 The camera angles, the sounds, the background score and the pacing of the narrative all combine to make this film one of the most arresting pictures to have come out in a long time. Every frame of the film is so beautiful to look at that one can actually save and use them as wallpapers. Even the more routine sequences like the ones in a van and the customary interviews look better than what we expect them to. As Alex ascends up the final points of the El Capitan, the background music gradually rises to a crescendo. I was reminded of the scene in Alfonso Cuarón’s Gravity when Sandra Bullock finally lands on earth and the background score leads her to getting up on her feet after floating through the whole film in zero gravity. It was a goosebump-inducing moment and so is this one on El Capitan as Alex inches closer to the summit. The best part is — this time it’s for real.

Free Solo is as much a victory for the indomitable spirit of man as it is for the power and beauty of imaginative cinema. The documentary being one of the purest forms of cinema only adds to the charm and feel of the achievement that this film is. It is a must watch for the story that it sets out to tell, the manner in which it tells that story and the deeply affecting and somewhat spiritual quality of its narrative and content. Free Solo won the Oscar for best documentary this year and is available on Bluray, DVD and online. If you ask me, this is one that deserves to be experienced on the IMAX.