Hobbs and Shaw is the first of the spinoff series from The Fast and the Furious franchise and it follows the basic characteristics of that franchise and attempts to flesh out the two very popular characters of Luke Hobbs (Johnson) and Deckard Shaw (Statham) who have over the years garnered their own fan following in the franchise. The film is ripe with their much-documented hatred for each other and the comedy that is extracted out of it. If that was not enough there are other characters too contributing to that delicate balance between the two which makes for an amusing watch.

The world is threatened by a deadly virus inappropriately named as “Snowflake” and it is stolen by an operative, Hattie (Vanessa Kirby) who happens to be Deckard Shaw’s sister. Two different sources working on the same case put together Hobbs and Shaw to track down Hattie and they do. Once the trio is united, they realize that Hattie is not the actual bad-guy and it’s only moments before they come face to face with Brixton (Idris Elba). Brixton is an old associate of Shaw who he shot in the head but has come back from the dead to play top henchman for a Blofeld- esc villain who seems to have a history with Hobbs and is hell-bent on world annihilation. As the film progresses we see Hobbs and Shaw running against time to not only neutralize the deadly virus but also save themselves from the marauding Brixton and his boss who would stop at nothing to release the virus and rid the world of mankind.

Johnson and Statham are wonderful and the chemistry that they share is so infectious that it soon rubs on to the audience. The fact that we have seen them grow through multiple Fast and Furious films only makes our association with the characters that much more effective and we understand their mutual hate. There is a lot of comedy between the two and most of it works. I just loved the give and takes between them and one scene in particular on an aircraft is rip-roaringly funny. This scene turns funnier when we see a much-loved face pop up who immediately strikes the perfect comic timing with Statham and Johnson. I believe he will be assuming more importance in future films. Johnson and Statham also work wonderfully well in the action sequences. The director understands the physical trait of the men and uses that to his advantage.

As was expected, Hobbs and Shaw is brimming with jaw-dropping action. Be it fistfights, car chases, bike chases, heavy artillery action or for that matter bringing down a helicopter using chains and a few cars. You name it, Hobbs and Shaw got it. The action in the first half was immensely likable even though there was nothing memorable. However, what we get to see in the second half is so crazy and out of the world that it is almost impossible to take it seriously. Also, this film suffers from the same issues in editing that has bugged a lot of action films of late. In certain action set pieces, the cuts are so fast that sometimes it becomes difficult to follow what is happening and therein lies the only problem with the action. Having said that, there are still moments of ravishing beauty and style in the action that are eye-catching and make you go wow! 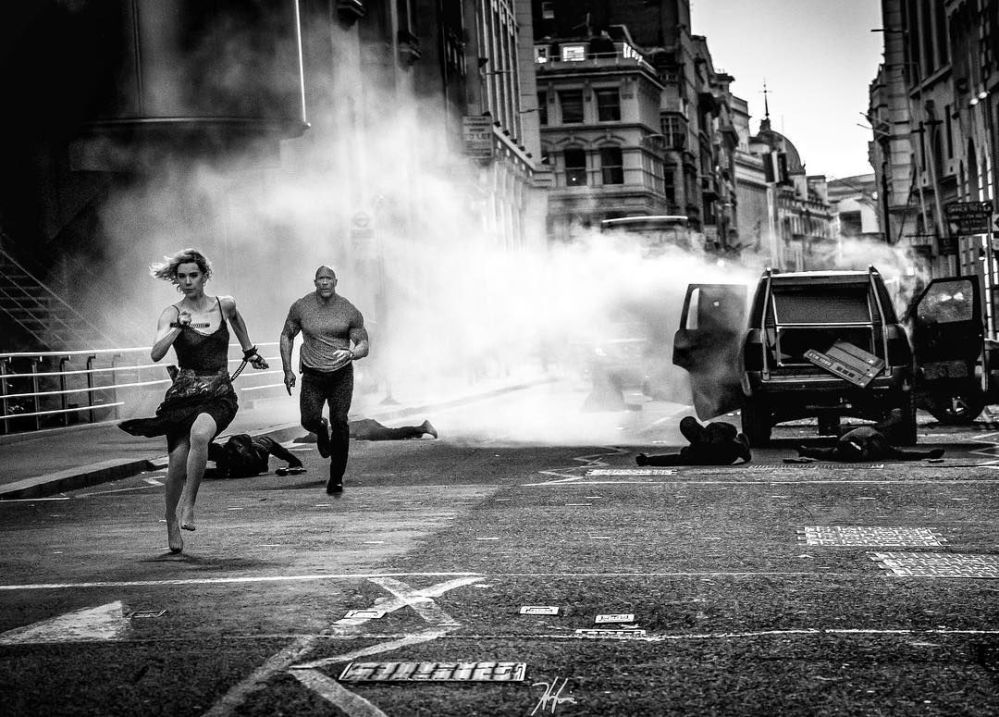 One expects only Idris Elba to strike out of frames that already have Statham and Johnson but surprisingly it’s Vanessa Kirby who makes a solid impact. Not only is she immaculate to look at and feels wonderfully apt in the action sequences, but she also nails the sequences in which she is supposed to enact comedy or for that matter drama. I was floored by a sequence at the end where she shares a drink with Johnson watching the sunset not knowing whether she will make it to the next sunset. This was a rendition that was better than what a film of this nature deserved. I will definitely watch out for Kirby in her future projects.

Idris Elba is curiously underused in this film. Here is a man who oozes charisma but whose charisma is hardly used in a film that happy relying more on a stunt double giving us the idea of the man pulling off unbelievable feats. He appears on the screen from time to time in a manner similar to how Statham appeared in Furious 7 and did precious little. He has a few dialogues here and there but they are not written well enough to make any considerable impact. Also, I felt as if Elba was just sleep-walking through the role trying to make a quick buck and not giving it his all. That isn’t surprising considering the franchise but if he had flexed those acting muscles of his, maybe it would have added something more to the film.

By the time we reach the final act, the film goes haywire to the extent that I stopped thinking about the plot, believability, sense, etc. At this point, I was just trying to enjoy the visuals, action and the individual performances that were coming my way and that, I believe, is the only way to enjoy this film. If you are someone who is looking for some entertainment and like to see things blown up, Hobbs and Shaw will not disappoint you. However, if you are going in with the thought of being served a story that makes sense, has believable action and credible performances, you are making a big mistake. It must be added that this film throws open a few new doors that in the future may just bring in some interesting takes on the Fast and Furious formulae. I just wish they went for a similar tone as Fast Five (My favorite Fast and Furious Film) and this would have been a film ages better than what it ended up as.