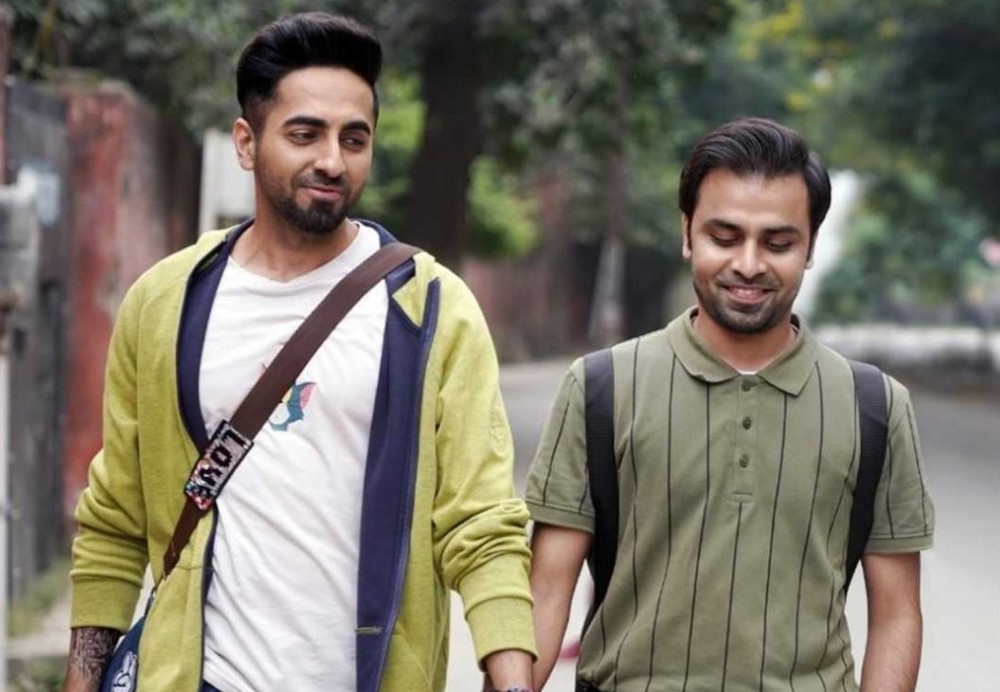 I am not homophobic, but I must agree that I am repelled by man-to-man intimacy. Ever since its release, I was only hearing great things about this film and the only thing that was stopping me from watching this film was my inability to fathom man-to-man intimacy on celluloid. I went for this film at the behest of a friend who not only is a lot more open-minded about the premise but is also ready to trust the makers with maintaining a perfect balance between realism and presentable realism. Half an hour into the film and I knew that comedy would take the center-stage here and the basic premise of the film would revolve not so much around a homosexual couple and their love life but would be a lot more focused on the repercussions of their choices on one of the partner’s family members.

Kartik (Ayushmann Khurrana) and Aman (Jitendra Kumar) are a much in love couple living in Delhi. They are running what seems to be an advertising firm but make barely enough to make ends meet. They pull off odd jobs for money as depicted in a hilarious scene where they are shown helping a girl (Bhumi Pednekar) elope with the 2nd love of her life (the first being Kartik himself). They are still happy and content with their lives. Things take an interesting turn when Aman’s family living in Allahabad invites him to come over and attend a family wedding and Kartik tags along. In a moment of unhindered passion, the two give in to their inner urges and are caught in the act by Shankar Tripathi (Gajraj Rao), Kartik’s father. And thus, begins the Tripathi family’s unflinching efforts to cure their son of his homosexuality, getting him married to a beautiful girl and also the couple’s efforts to put their point across to the family and make them understand their relationship.

As I sat through this film, I was pleasantly surprised to note that the film was at its strongest when it was not dealing with the couple but with the ramifications of their relationship on the family in question. Shankar Tripathi pukes and faints after catching the two red-handed. He remains unconscious for an uncomfortably long time. Meanwhile, we see how his family members haggle over a plethora of different issues that they believe might have resulted in Shankar Tripathi fainting. During this scene, we realize how many and how diverse conflicts plague the family. This is just the set up for a ploy that the screenplay of the film revisits many times throughout the runtime of the film. By the halfway mark, we see the family shun Kartik out of Allahabad and Aman is not able to do anything about it. However, there comes a twist that results in Kartik’s come back to the fore and he returns stronger than ever before.

Between the above mentioned two portions, there is a huge chunk of the film that is acted out between Gajraj Rao, Neena Gupta, Jitendra Kumar, Manu Rishi Chadha and Sunita Rajwar which happens to the funniest and most intriguing in the whole film. Why I liked this portion so much was for the simple reason that it showed to perfection the inner workings of a traditional Indian middle-class family. It showed us the conflicts of the parents who evidently love their son but are unable to cope with his different sexual orientation. They are just as much bothered about their social status as they are about the wellbeing of their son. The actors wonderfully bring out the essence of this conflict through their performances in this portion.

For me, the protagonists of the film were Gajraj Rao and Neena Gupta. Both pick up their acts from where they had left off in Badhaai Ho and grab your attention from the first time they appear on the screen. Their rendition of their characters is so lifelike that you are tickled by some of their very casual lines. The comedy extracted out of their mannerisms and that middle-class vibe to the problem that we are all so aware of. There also seems to be a sense of comfort and camaraderie between Rao and Gupta which enormously helps their respective acts. As the film progresses, we learn about a thing or two in their relationship and the revelations are not always pretty, but they are invariably laid out in a comic manner. The reason why these revelations make sense and give us different dimensions of the character is because of how well they are rendered by the actors. Shubh Mangal Zyada Saavdhan is elevated to greatness thanks to their performance.

The next two biggest stars for me in the film were Manu Rishi Chadha and Sunita Rajwar. They perfectly compliment Gupta and Rao and add a lot to the dialogues that are the heart and soul of this film. Manu Rishi Chadha and Sunita Rajwar have their own agendas in the story but those are constantly at crossroads with what Kartik and Aman are doing. Torn between their duty towards their elder brother and his wife and their own problems, the two actors often break out into some of the funniest lines that the film has to offer. The fact that their frustrations are documented on their faces only makes their act that much more hilarious and loveable.

Ayushmann Khurrana and Jitendra Kumar as the couple are proficient. I felt that the character of Kartik could have been dialed down a few notches as at many junctures it felt overtly obnoxious and that too for no apparent reason. Had he been toned down a little more, maybe we could have connected better with his frustrations and felt his pain better. Jitendra Kumar does well with his character but somehow gets lost in the crowd of other stupendous performances and because Ayushmann Khurrana is so loud and over the top and literally washes away anyone who shares the screen with him. It must also be added that Jitendra’s character doesn’t have the kind of catchy dialogues that some of the other characters have and that coupled with a not so pronounced physicality makes him somewhat diminished in the screen-presence department.

Special mention must be made about the dialogues of the film. Shubh Mangal Zyada Saavdhan is what it is partly because of its witty dialogues that not only tickles your funny bones but also gives you the exact feeling of being a middle-class Indian household dealing with homosexuality and its effects. While most will revel in the wit and charm of the words, some will also notice the poignancy and sense of denial that these very words want to convey which gives us a clear idea about what the family and the couple are going through.

I really enjoyed Shubh Mangal Zyada Saavdhan. It is well made, well-acted and homosexuality is subtly dealt with leaving no reason for anyone to be repulsed. There is a truckload of other issues that the film deals with and it deals with those issues with a lot of power, conviction, and nuance. I am sure that anyone who is willing to give this film an unbiased look will have a great time with it.