Extraction is based on the comic book, Ciudad by Ande Parks. The story revolves around a mercenary, Tyler (Chris Hemsworth) who is recruited by an Indian drug lord, Mahajan (Pankaj Tripathi) to rescue his son who has been kidnapped by Amir Asif (Priyanshu Painyuli), a rival drug lord from Bangladesh and held for ransom. Mahajan feels that it is not just a matter of ransom to get his son back but more than that, it is a matter of prestige. He dispatches his own henchman Saju (Randeep Hooda) to get the kid back from Dhaka. Saju realizes that he will need the assistance of a much larger force to get the kid out of Amir’s grasp. This is where Tyler and his team come in. Things seem to be going according to plan but then something happens that not only jeopardizes the safety of the kid but also lands Tyler in the middle of the most difficult extraction of his career.

Extraction is the perfect example of entertaining and disposable fare that is aware of what it is and plays to its strength from start to finish. The film is nearly 2-hours long but when you watch it, it feels more like an hour-long and that is because of how well written its screenplay is and how well edited it is. There isn’t much in terms of plot. The basic premise is straight forward and all the players are introduced in the first 15-20 minutes of the film but what makes it special is how the events unfold and take the story forward. The action may be the guiding force here but there are moments of surprising warmth and interpersonal drama that at many points caught me by surprise. More on that later.

The film is directed by Sam Hargrave whose IMDB credits list 80 stunt-coordinator entries. Some of it are Avenger: Endgame, Avengers: Infinity War, Thor Ragnarök, and Deadpool 2. The man definitely knows how to put visually stunning action on the screen, and he doesn’t disappoint one bit in this film. The very first bit of action where Hemsworth mercilessly beats, chops and blows his way through the initial bad guys to get hold of the kid is stunning. It set the mood for what is about to come. The moment Randeep Hooda’s Saju walks into the middle of the mayhem, you know that the stakes are about to get higher as he is as well trained as Hemsworth’s Tyler. The hand to hand combat between the two atop a building and then on the crowded streets of Dhaka was a lot of fun.

There is a “oner” in the film that has been talked about a lot and it worked well for me. The chase sequences are chaotic, but they are also shot in a manner that will let you enjoy them fully and would also allow you to appreciate the action that is unfolding. Apart from an accident involving a truck that looked phony, everything else was on point for me. This is a Netflix release and will be mostly watched on smaller screens, handhelds etc. The visuals should hold up for its target audience without any fuss. Even on the big screen, very few people will have an issue with this film in terms of visuals and the action. As the film progresses, Hargrave throws more and more men, machinery and explosives at Saju and Tyler and they just annihilate them single-handedly. It might not be something that can be taken seriously but it does make for some solid entertainment if you can ignore the sheer lack of logic and believability.

Coming back to some other merits of the film apart from the action, I must sight the example of Chris Hemsworth who is flawless as the Mercenary for hire. He has a past involving the death of his own son and is a troubled man. It is something that is pretty routine in films like this but Hemsworth’s act sells the emotion well which makes us take his character seriously. Once he meets the kid, Ovi (Rudhraksh Jaiswal), and strikes a camaraderie with him, the stakes get increasingly higher as we now care for them. After a while, it is just about getting the kid out of the mess for Tyler and that is something that elevates the film quite a bit. He shares at least two scenes with the kid that doesn’t involve any action. These two scenes help us to understand the place that both these people are in, in terms of their mental states. Strangely enough, these scenes don’t feel forced but in fact tug at our hearts. Hemsworth excels in the action scenes because of his towering physicality and the sense of ease that he brings to the choreographed action. He does run out of bullets from time to time and he does reload (that is something many big-budget films miss). Chuckle! Chuckle!

Randeep Hooda is a terrific actor and here too he does and extremely good job with his character. He has his own reasons to get the kid. If he is unable to bring back the kid, his family will be killed by Mahajan. One can see the sense of tension on his face from time to time and it also explains his willingness to continue with the job at hand even after he is hit by a truck. Hooda’s scenes with his wife and kid feel organic and they are not prolonged which really helps the cause. As was the case with Hemsworth, He too looks perfectly in sync with the action sequences. In fact, I never liked him more in an action avatar than here. Priyanshu Painyuli, the man who played Bhavesh Joshi in one of my favorite Bollywood superhero films of all time, Bhavesh Joshi Superhero, plays a despicable drug lord here and he too sells his part completely. He looks and acts like someone who could kidnap his rival’s kid and make him pay. I just wish there was a little more of him. David Harbour makes an impact in a cameo. 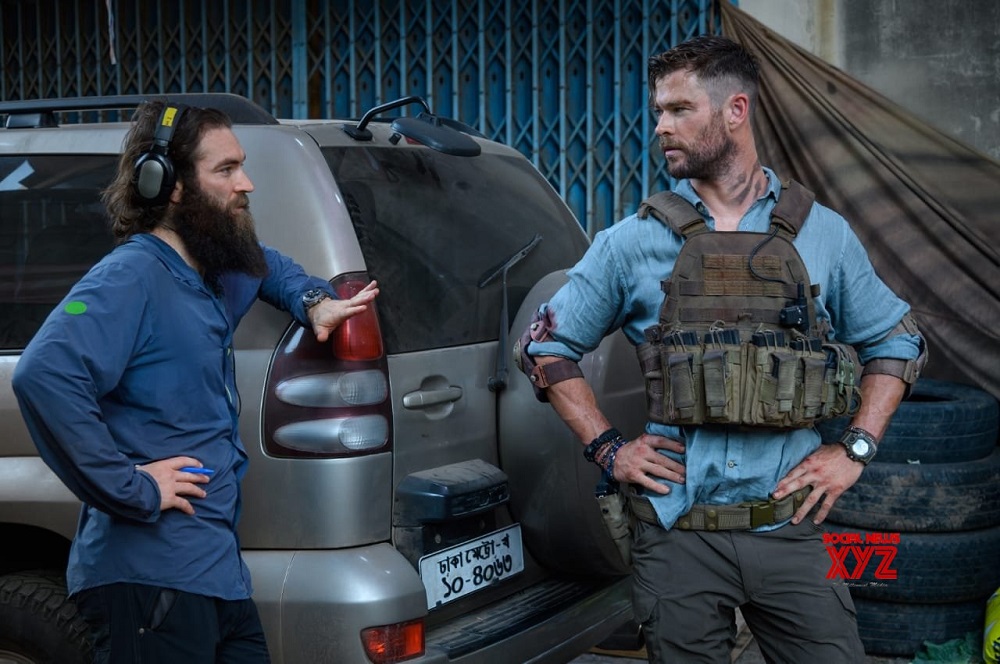 I was expecting Extraction to be in the same line as 6 Underground, but it turned out ages better than that film. The story has enough meat to warrant the action. The characters and the situations are serious and have no buffoonery that I find extremely annoying in an action film. The safety and security of the protagonist and the one he is saving is constantly at risk and major character are shown dying which adds to the dramatic effect and tension. The action, no matter how over the top, is extremely well done. There may be some inspiration from previous films but that’s because of the director’s body of stunt work weighing down on this film. I feel for all the entertainment and physicality that the action brought to the table, we can forgive its lack of originality.

To top it all up, the film has some interestingly good performances from Hemsworth, Hooda, and Painyuli that elevates the overall feel of the film. It is well edited too in terms of the per-sequence editing and the overall edit which makes the film feel breezy and on point. I would not mind watching this film a couple of times more. Thanks to the lack of new original content on the OTT and a total stop on new releases in theaters, Extraction is poised to be a huge draw for Netflix in the coming weeks.