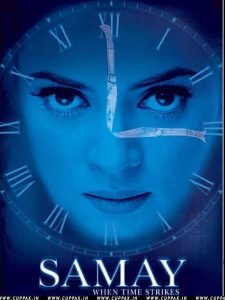 Somewhere in the middle of cacophony of formulaic and mundane fares churned out in Bollywood, comes a movie which reinstates your belief for a motion picture industry which is renowned for producing the maximum number films every year and that too in innumerable languages. The big production houses, the iconic stars, their fan following, the captivating music and above all the sheer love for cinema. Bollywood is a world within a world and it has a huge responsibility to create dreams for a nation and if not that bring to life many dreams that the audiences see every day. Samay may well be considered as one hell of a nightmare which none of us would ever want to be a part off. Robby Grewal has made an outstanding film by just being able to restrain himself from the many stereotypes that Bollywood has become slaves of.  His biggest gamble was to give the reins of the movie to a female protagonist. A protagonist who is extremely de-glamorized, a protagonist who is a widowed mother, a protagonist who has practically no oomph and Samay, once again proves that if someone has a good story to tell, the audience is always all ears.

Malavika Chauhan (Sushmita Sen) and her associate Satya (Sushant Singh) are investigating the murder of an industrialist who seems to have had no enemies. The murderer has taken special care not to leave any evidences except some clues which he seems to have purposely left. As Malavika tries to piece together the evidences, two more murders are committed which leaves the police force bewildered. The fact that the murderer is always a step ahead of the police further frustrates and infuriates Malavika. However she is able to piece together the clues left by the murderer and learns of his next victim and the possible time of his next murder. The murderer however, has different plans which will shake Malavika and the police force to the core.

Samay bears an uncanny resemblance to Se7en, a master piece by David Fincher but the screenplay and treatment is as different from it as one could ask for so it doesn’t stick out as a lame remake of another Hollywood classic. Samay stands tall on its own logic and story which is very Indian. The situations, the characters, the bonding and even the motives are Indian and the audience will be able to relate to each one of them. The success of a thriller lies primarily on the fact that how much the audiences are able to relate to the characters. Here again the director strikes a home run by making us fall in love with the major characters and actually start caring for their well being.

Samay doesn’t reveal its cards till the last scene is done. No matter how smart you are, the narrative will keep you guessing and you will be forced to track the path taken by Malavika in search of the baddie and every time turn up in front of a dead end. The drama is intense and captivating. There is just one song and that too is situational and tailored into the narrative. The superlative performances go a long way into making Samay a clear winner. Sushmita Sen delivers probably the best act of her career. She is one untapped resource of Bollywood, who in the hands of smarter directors would have worked wonders. Her character is divided between a  hard nut cop who is determined to bring down the mercurial menace in whatever means possible and that of a mom, who has nothing left in life apart from her lovable daughter. Sushant Singh is an able ally to her who oozes confidence and realism in every scene. Jackie Shroff in a cameo is outstanding. Another high-point of Samay is its razor sharp editing. Aarif Sheikh won a national award for his sensational editing in 2004.

Samay was released in 2003 and I have been hearing good things about it ever since. But I never made a go due to simple lack of interest. I urge all of you who haven’t seen it not to repeat my mistake. Samay is a glorious achievement reminiscent of the more sensible Bollywood cinema which we have over the years come to regard as new age Bollywood cinema. A movie like Samay should not be missed at any cost.