There was a surpassingly tender moment in Darbar where a dying daughter reveals something important about her imminent death to her father. After she has finished the important bits, she gently rubs the back of her head and complaints in the most innocent manner that her head hurts making a face. She follows it up by saying that the likes him a lot, knowing that it might just be her last words to her father.  She then goes on to cuddle up against her unconscious father and find some solace in his touch. This sequence comes as a surprising departure from the over the top content that the audience has been dished out until that point in time. This sequence melted my heart in such a way that I was forced to forgive the film’s utter lack of realism to matters building up to that particular sequence. Darbar made me question and almost as quickly forgive my issues with it as it invariably presented something that was either heartwarming or unbelievably stylish.

The film starts with a brief introduction to the Commissioner of Mumbai Police, Aditya Arunachalam (Rajinikanth) who has been blowing a hole through the Mumbai Underworld. We learn from paper cuttings and accounts of gangsters that he has killed 9 gangsters in a day. We see him in his element soon enough when he is shown cutting his way through a number of gangsters at a party. He then proceeds to blackmail on gun-point a human rights commission inquiry to get his way around the complaints lodged against him for the atrocities committed on the gangsters. The lady head of the Human Rights Commission, who had met him a year before, remembered the man to be a very different person from what he has become and tries to understand what led to this radical change. So we are taken back in time to understand why he has been killing so many gangsters and who is it that he is searching for. 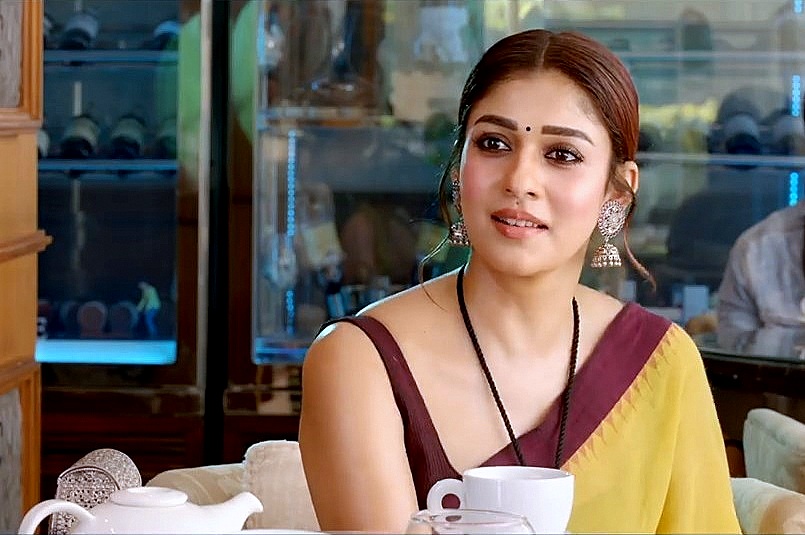 A.R Murugadoss is known for racy stories that develop through elaborate and intricate set pieces (Spyder, Thuppakki) but Darbar is not that kind of a film. The tale here is simple and accessible and somewhat moody in pace. There is a lot of comedy and most of it works pretty well. The biggest contributing factor to the comedy working is the effortless chemistry between Rajinikanth and Yogi Babu who plays his sidekick. Yogi is Rajinikanth’s Man-Friday but he is never afraid to speak his heart out about the deficiencies of his boss especially in matters relating to wooing a pretty girl. This contributes to some of the funniest bits in the film and I loved these portions thoroughly.

A lot of time in the first half is dedicated to building a romantic angle between Rajinikanth and Nayathara’s character Lily and most of it worked well for me simply because how well-acted these portions were. Nayanthara looked stunning even though she was evidently covered under a thick layer of makeup. She has an aura about herself and that was evident in her essay which visibly elevated her character. Rajinikanth is smitten by her and can’t even speak in her presence. The way Nayanthara carried herself in saris perfectly explained the predicament of Rajinikanth’s character. She was just too hot to handle for him. I have to add here that I loved how they dealt with the issue regarding the age difference between the two characters. It was dealt with thoughtfully and even though Nayathara’s character was halfway abandoned in terms of the narrative, the portion where the age issue is brought up by her cousin brother did explain which way the love story was headed.

This may not be a film for someone who is not into Rajinikanth films. He is a superman here just as you expect him to be. Not a single goon is ever able to land a single punch on him. He never gets hit by any bullets. He does all kinds of acrobatics that need him to dispatch his adversaries as well as look cool as he does it. He even gets back to perfect mental and physical shape with 4 days of workout. Kudos to him for practically doing the weight pulls that he is shown doing. I was ready to accept all that and a lot more because of the way Rajinikanth approached the character and rendered it. He has a kind of charm that is unmatched in Indian cinema. He does the same things over and over again and yet he never gets repetitive. He is able to shift gears effortlessly between drama, action, and comedy here and it helped the film immensely. However, if you are the kind of viewer who would ask questions about the feasibility of things that he is shown doing, its best that you skip this film. Suffice is to say that Rajinikanth is in his elements here and Murugadoss gives his fans the vintage Rajinikanth that they deserved.

Suniel Shetty as the antagonist is perfect. He looks the part and even though he actually comes to the fore in the second half, he does enough to make an impact. The larger than life hero of Rajinikanth needed an equally larger than life adversary and Suniel Shetty was exactly that. He could instill some fear in our hearts even though we knew full well how he would end up. Nivetha Thomas as Rajinikanth’s daughter was loveable and shared a wonderful chemistry with Rajinikanth. She shares some of the sweetest and warmest scenes of the film with Rajinikanth and it is some of these scenes that elevated this film many folds for me.

To sum it all up, Darbar is a film that has loopholes that are the size of black holes. This is a film that shuns believability from the first scene and never tries to make any sense whatsoever even in matters where it desperately needed to. What it does well is understand its superstar’s forte and plays to it. The screenplay and the set pieces not only give Rajinikanth the chance to exercise his strength in terms of his style and dramatic abilities but also appeals to the hidden kids in us. In doing so it is able to rise above its mediocrity and become a film that is far better than what it is in reality. Rajinikanth tugs at your heartstrings when he has to. He makes you go boisterous when he has to and he never lets go of his hold on your senses. Add to that a top-notch supporting cast a story that has enough material to feel relevant in the film’s runtime of 2 hours and 40 minutes and you have a perfect mass entertainer. This one is for the Rajinikanth fans but if the others can suspend their disbelief and flow with the feel of the film, they will definitely have a great time too.